15 Items Every Player Should Get ASAP

I’m sure your list is very helpful for people curious about legendaries.

Which is why 7 of the 15 are not legendary. Because I’m only trying to help people curious about legs.

The entire point is that I’m singling out gear that people will find incredibly useful and that they should try and get as quickly as possible because it is so useful. In fact, if I was going to include a “beginner’s gear pack” on the marketplace (70 platinum, probably), I would put 1-2 of the legendaries (randomly chosen, with random stats) and all 7 of the non-legendary items in it because they’re just so useful and ubiquitous for all modes of play.

My problem is with the ASAP. There’s currently so little information for new players and I believe that saying you need to get and activate legendaries ASAP without mentioning how helpful the “cheap” gear is in the beginning, is not helpful.

Because I’m only trying to help people curious about legs.

It’s what drew me to Ambra, that’s for sure.

My problem is with the ASAP. There’s currently so little information for new players and I believe that saying you need to get and activate legendaries ASAP without mentioning how helpful the “cheap” gear is in the beginning, is not helpful.

There is a huge difference between “get” and “get and activate”. I highly recommend you learn it because you seem to have a problem purely based upon something that I have never said that you seem to be operating under the assumption of.

These are items that are so powerful and ubiquitous that pretty much every guide you read is going to mention at least half of them and are the fundamental underpinnings of many effective loadouts.

I highly recommend that you learn that just because something is in a guide somewhere, that does not make it useful for everyone.

Actually, a little bit is still peeking out haha

Useful only in PvP. The Legendary effect is very underwhelming especially considering that the primary effect is buildable cost. Turning 32 or 64 points of regen into 40 or 72 at a health station

I swear I have had to edit this comment so many times it isn’t even funny.

I went through a similar thing with my Ambra guide when I was figuring out what the hell was going wrong with it. Formatting is… an adventure.

Cool now I have something new to do.

Time to figure out how to make some of these “worthless legendaries” viable.

And @blainebrossart1
Edits apparently don’t always count if they’re back to back. So I kept my own count. My Thrall Rebellion thread has had a grand total of 129 edits. I now have presets saved to save me. That was a beast to work through. I’m glad the forums are at least pretty user friendly, except for these helpful-but-actually-cruel little things

@BaconianOne
You only have until the winter update, so good luck!

Excellent list, there’s a couple of Purples that I find quite useful for PvE. As someone who also queue’s with randoms, I tend to take a zero shard generator and two purples (or the blue health regen item you mention for a lot of levels, just because I don’t trust newbies to get buildables, so I just get up two fairly useful pieces of gear and can build, with the buildables outweighing the advantages of my third piece of gear or any legendary effects from a more expensive loadout. I tend to only take 3 legendaries on the Raid missions with randoms (Algorithm, Sentinel, Heliophage).

I tend to go with two of those three depending on the reload speed needs of the character. For Void’s Edge, the shard generator is less necessary, but with randoms, you need to have enough shards to build the shield right at the very start after Nix and right before the Wolf Unit reaches the last spawn, especially on advanced.

So many legendaries that I didn’t even know existed. I don’t play pve so the only legendaries I got are from packs. I don’t even use legendaries anymore in any of my characters. I find them to be a waste of shards. I like to run white, green and blue gears. On very rare times I would insert a purple in there but that’s the highest I go for Incursion pvp. It’s sad to see a teammate or enemy running 2-3 legendaries. That’s way too many shards spent on gears instead of better using them for buildables/fat bot.

Edit: I see my favorite gear for all my melee characters is on the list. 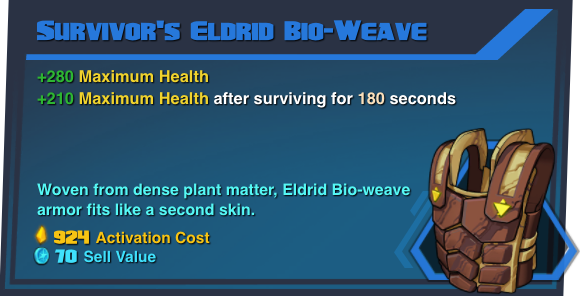 It’s sad to see a teammate or enemy running 2-3 legendaries. That’s way too many shards spent on gears instead of better using them for buildables/fat bot.

^Often I build so much stuff that I don’t equip a single piece of gear. Really the only ones I actively go for are AS on Alani and Reload on characters with slow reloads. ¨

Hurts me to see people running 2-3 legendaries, esp on my team. I don’t get to activate any of my gear because ya’ll hog all the shards for your stupidly expensive loadouts and don’t build squat

…Kit won’t admit it but if you play together you will see a loot ninja in action, grabbing everything.
Then in the forums saying: You don’t need shard regen, there’s plenty of shards.
Yeah, plenty for that loot ninja.

You seem to understand this game very well. Perhaps you are just the person to put together a guide for new players. The simple things we’ve all learned while we’ve played. Like
don’t rush in to get a kill, xp is team-based and it’s better to stay alive
never ignore shards
building is often more helpful than activating gear
if you die, wait to see if someone will revive you

I’m sure you have other recommendations and I think a guide like this would help new players get into the game and enjoy themselves.

On very rare times I would insert a purple in there but that’s the highest I go for Incursion pvp.

I used to do the same because I felt bad running legendaries and epics against pugs but I’ve been getting ran over by so many of the good players here running full legendaries/ epics. While one player on their team runs a shard generator/wrench, or some combination like that, the rest of the team is free to stack stats on stats.

The legendaries are almost required now in pvp

The legendaries are almost required now in pvp

I have never found the rarity of the gear to play much of an impact in Incursion Pvp. It’s also very rare to see a high skilled player running multiple legendaries in a pug team. They understand the importance of the use of shards for buildables. That usage of shards helps the team a whole lot more than saving them for expensive loadouts.

In a premade team, there might be a coordination of who is responsible for building and who’s activating multiple legendaries for the better of the team. For example back when I ran under my 5 man premade team, 2 of us were in charge of building (so we ran 0 cost white gears) while the others spent shards only on legendary gears for the best of the team. In a pug group, you won’t find such communication.

Maybe not 3 legendaries but almost everytime I come up against high level teams they are running at least 2 epics and a legendary depending on what battleborn is being used.

I’m all for legendaries in tournaments but there is a reason they are banned.

Ever tried to kill a Mellka with a legendary dr, epic health regen, epic max health? Green’s/blues won’t cut it.