A few questions (new to Mordecai)

Hi there. I’ve played BL2 for some 4-digit hours and finally decided to fire up BL1. I chose Mordecai as I tend to enjoy sniping in PvE games. There’s a few things I’m curious about however. Sorry a couple of these are general questions but I thought I might as well stick them with the rest of them.

Also, do the prefixes in weapons even mean anything in this game or are they just random? So far my best performance sniper has been a green Hyperion PPZ but I noticed Dahl also had a PPZ sniper. What are the preferred prefixes for sniping in this game?

Thanks for reading and possible answers and sorry for my longwinded questions.

How do you effectively snipe in this game?

Shoot from cover; move; shoot again. I’d avoid ADS while moving since it slows you down.

Any general advice as to how to throw Bloodwing out so that he wouldn’t get stuck on things while returning? The ability takes ridiculously long to be able to be used again when that happens (how long does it actually take?).

Not sure on the cooldown, although there are skills and gear that decrease the cooldown time just like in BL2. As far as I can tell, Bloodwing is out for a certain duration regardless? Probably something on the wiki about that.

Also, do the prefixes in weapons even mean anything in this game or are they just random?

More information than you probably wanted to know here: 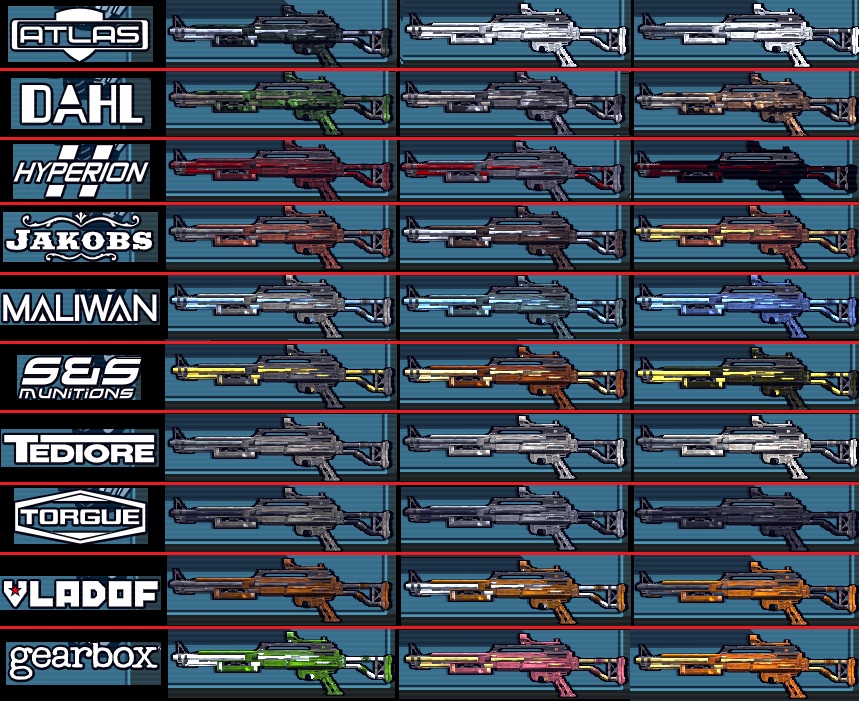 Due to the fact that weapons are randomly generated by the names of the prefixes and quality, the stats aren't always accurate. This is a list of the suffixes used on weapons. In addition, while a weapon will usually get a descriptor that matches up...

Can I respec in this game?

Yes. Any of the New-U stations provide this option, along with the ability to switch colour palette on your character.

Lastly, I’d like some confirmation if choosing playthrough 2 still allows me to return to playthrough 1.

Yes, you can. When you select a character that has unlocked Pt.2, you’ll get the option to choose either Pt.1 or Pt.2; mission progress in each is separate, just like N/T/U option in BL2.

I’d like to note that you can recall Bloodwing while she’s out by pressing your action skill button a second time.

Thanks for the replies, though I’d say some of the stuff went beside my point.

I’m not conserned about ADS slowing me down, I’m asking if moving is affecting my accuracy while ADSing in this game. I sometimes use movement to make very minor corrections on an otherwise perfectly lined shot and for some reason those whiff in BL1 all the time where as in BL2 they do not. Do I have to stop dead on my tracks to snipe in this game or am I just having bad luck because the sniper accuracy in this game is worse?

Also, my problem with Bloodwing isn’t his cooldown, I have that well under control with Carrion Call. It’s him getting stuck in basically anything that sticks a few feet from the ground. That prevents me from throwing him out again even if my cooldown would already be reset and circling aound him never seems to fix the problem so I’m looking for tips to avoid that in the first place.

Thanks for the link the link and confirmation, much appreciated.

Unfortunately, sniper accuracy in this game is not as good as BL2; sniping in general feels clunky. If you use exclusively snipers, however, your Sniper Rifle Weapon Proficiency will build up, which has a noticable effect on sniping ability.

iirc, and correct me if i’m wrong, but BL1 has a bug that applies hipfire accuracy during ADS randomly.

Get your sniper rifle proficiency to 50 and things settle down a lot. There’s a kind of random ‘hit/miss’ roll that is reduced by proficiency.

Bloodwing…takes a bit of getting used to, but you’ll begin to recognise the kind of places where he’ll struggle. Your initial release point is important; don’t aim him at stuff. Unless an enemy is right in your crosshairs and in the open, aim for open zones near what you want him to attack. Cooldown skills will let you get to the glorious point where you can throw him out, have him kill things, and recall him for full health refill, and then throw him again almost immediately.

He will still crash into stuff. That’s inevitable. He has some turkey genes.

How well you’re able to snipe really depends on the accuracy stat of the sniper rifle.

Like others have mentioned, weapons don’t actually fire right on the crosshair where the player aims, but depends on this aforementioned accuracy stat of the weapon.

You absolutely need to use cover in this game if you want to stay alive, and especially when playing as Mordecai. That’s a fact, and one of the larger differences between BL2 and BL1.

Most enemies do not have assigned drops. The loot system in general is much more randomized and ‘unbound’ compared to BL2. You will find common guns which actually are better than rarer variants are, because weapon parts aren’t restricted to being spawned according to color-coded rarity levels. Check weapon cards instead of colors.

Badass lance in Knoxx’s DLC can drop pearlescents. You should go kill them.

I’m playing through BL1 again as Mordecai (again) currently, and you could watch some of my videos. In playthrough 2, every mission has been rated as tough or hard, and you can see where I make mistakes and what not to do when facing really tough baddies.

Mordecai is a glass cannon, and has issues with survivability. But if you’re careful, and extremely patient, you can prevail.

Yes, after having played for a couple of days more I’ve realized the accuracy stat matters worlds for snipers in this game. While I was finishing the rest of PT1 quests couple of the enemies were nice enough to drop a lvl 40 Transfusion and a lvl 40 Hyperion sniper for me (what’s up with that, all the other stuff has capped at lvl 37 I think). I’m basically drilling through everything now because the thing actually tends to hit where I point it. Probably the reason I found my earlier Hyperion sniper the best so far.

I haven’t had any real problems with survivability so far, but I’ll have to see about that when the enemy levels crank up a bit. I tend to go with the most shield capacity I can find. I’ve also been using Transfusion grenades all the time since that’s what I did with Zero and well, they seem like the only grenades in the game that fill some purpose other than just blowing up

I guess part of the reason the game just got easier is that I’ve got Bloodwings daze up to 100% with 4 swoops by now. On the other hand now it feels even worse when he gets stuck.

And yeah, the proficiencies. I didn’t really pay attention to that earlier when it said it upgraded. Or well, I did but I didn’t know the ceiling is at 50. I’m only at 21 after my first PT. That’s going to take a lot of time. I guess I’m not trying that pistol build with this character then.

Thanks for the feedback everyone.

I find transfusion grenades to be pretty useless. The trails always get stuck on things and travel way too slowly for when the player really needs health.

Using Bloodwing to swipe a bunch of health vials from enemies is way more effective for keeping Mordecai alive. In between battles and if Mordecai’s health is low, if Bloodwing has been doing his job then there are usually enough vials lying around to get back to full health.

They certainly seem slower than in BL2. Partly because all grenades have fuse time but yes, the trails also do seem slower. What I’ve been doing is throw one out right after Bloodwing if there’s a bunch of enemies. Bloodwing returns before the trails and during all that the slowed down enemies are easy pickings for my rifle so carrion call will have reset Bloodwing timer again.

I guess I could try longbow to see how it does. Reading some of the older posts here that seems to be most peoples choise. I just like it that my grenade isn’t just about causing some extra damage. Between Bloodwing and crit hits I’m dealing tons of it already so I don’t really see the point but I’ll give it a try next time I see a longbow laying around.

Since Mordecai has a melee skill and a melee COM I guess it’s closely enough related to be asked here instead of a new thread somewhere:

What’s up with melee critical hits? Melee crits seem to be mostly random. I can jump over someones head or jump towards them and slice them from the top and still not get criticals with melee. I’m putting my next bunch of points into Leathal strike to try it out but it doesn’t feel worth anything if I can’t reliably hit crits with my melees.

EDIT: Oh yeah. I’ve seen multiple times that Mordekai’s Killer is “the 2nd best tier 2 skill in the game”. So out of curiosity, what is the best one then. My guess would go to Dramatic entrance. Did I get it right?

If you’re talking about lethal strike, it’s advertised as being 35% chance to activate, but I can’t speak to your other question about hitboxes. It’s a good skill to invest in and not just because it feels badass.

Ransack, combined with Swipe can generate some of the best gear in the game since every weapon that drops, I believe uses the highest awesome level. Or at least a really high AL.

Yeah, I mean hitboxes. I find it nearly impossible to get critical hits with melee. Aiming for their head, over their head or on top of their head almost never produce critical hits. The first one sometimes rarely does. What’s up with this and is there some way to reliably crit with melees? I’d sure like to be hitting crits when leathal strike procs.

Can’t say I’ve noticed this, myself.

I’ll have to play Zer0 with melee then come back to BL1 to see if there’s a difference. Maybe there is.

Not sure why you’d have to start BL2 for this, especially since melee Zer0 doesn’t exactly require melee crits (although I’m all for it, it’s damn good game). I just played a couple hours more deliberately trying to melee stuff much more than usual and I managed to get a crit with melee maybe 1 out of 10 or 20 times or so. For some reason the strikes always seem to hit something other than their head.

Those higher-level loot drops were probably due to Mordecai’s “Ransack” skill - assuming you have points in it. It’s a great skill, honestly.

I don’t actually. Most stuff while I was mopping up normal capped at 37 (IIRC) and then those couple drops and nothing else were level 40. Which was nice as it fit my build.

True, you don’t need to get critical hits when using melee as Zer0, if you’re specced for playing that way, but the same could be said for when using Lethal Strike as Mordecai. And not even when talking about using the Truxican Wrestler CMOD.

Lethal Strike still does a lot of damage if it’s not a critical hit.

If the hitbox isn’t where you expect, then you have to adjust, and figure out where the player should have to aim to hit the enemy’s hitbox.