This is so we get the ammo holders names changed from clips to magazines because they are not clips.

I thought they were already named magazine? Do you mean the reverse, from magazine to clip?

I saw clip, not magazine. 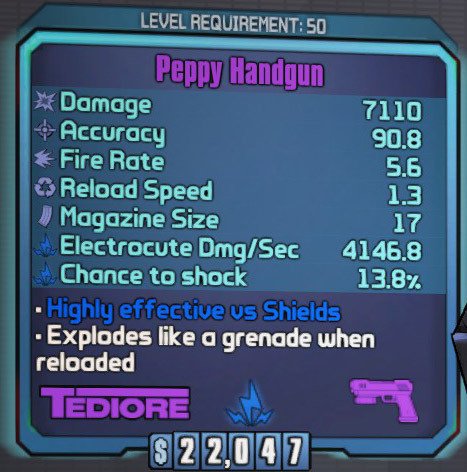 If you’re talking about the naming in skills, Athena’s Gathering Tempest says Magazine Size and so does Claptrap’s Organized Guns are Happy Guns. Nisha’s Crack Shot also names it a magazine. One Last Things says clip however, which is a lil weird.

Exactly it says clip, we need to fix it.
Also a few class mods say clip.

I thought this was one of those things where common usage had usurped the original technical distinction between the two, so it didn’t really matter any more?

I would rather it say Clip.

Out of all the people I know friends, family, Everyone at the gun range The all say clip.
I don’t think I know a single person Out in the real world who says Magazine.

Sorry blut but in my opinion clip sounds way better.

Clip is something else, it is a Hollywood thing.
It is said by capitalist slime.

Magazine is also something else it is a commercialized publication.
Also said by capitalist slime.

So maybe we just call them ammo holders.

This guy! This guy right here!

Im gonna be the guy who just comes out and says it. In the list of things that this game needs, this appears quite low down

Or it’s said by the military in every country. Even Africa and how could they be capitalist slime?

It’s not a matter of opinion. A clip is a type of magazine used by most bolt-action rifles while magazine is a general term that refers any type of ammo storage that includes clips but also box magazines like in assault rifles and submachine guns and tubular magazines in most shotguns and lever-action rifles. Mainstream media like news outlets, films, and video games have always mixed up the two terms, but there is a distinction.

Well, in his defense, he does say right in the title that it’s nitpicky.

I am not sure where you came up with that but that is also wrong.

There is a difference but not what you said.

A clip is actually a Band or strip of some sort that holds ammo cartridges together to help in loading of a magazine.

A magazine however is a container that holds the cartridges.

Has anything to do with the distinction between a clip or a magazine.

So Like i said in this fact Blut is right that technically they should be named Magazines however in my opinion Clip is more wildly used by civilians and gamers, Which is why I see nothing wrong with it and think clip sounds better. And next time you try to prove me wrong get your facts straight first don’t just look at a wiki page some kid who plays to much call of duty came up with.

Ha I just won you said I was right.

First off: no, I did not just pull this off of some wiki; and, no, I don’t play Call of Duty. I’m going by what I’ve known, and what I’ve known is that there is a distinction between this and this. And, yes, I made an error in referring to clips as magazines; they’re actually speedloaders. But as Blut has stated, box magazines and tubular magazines are not clips.

You are right a lot of the time Blut.
I just enjoy disagreeing with you. I don’t know why it’s kind of like one of them there love hate things.

I move to have all magazines and clips renamed ‘bullet boxes’.