Formerly known as the Horrible Guide to Hoodinis, which I could never tell was finished or not. And also, I moved it to this section to bring more attention and hopefully spur discussion in doing so.

Welcome to my custom-made User’s Manual for Hoodini. I understand the skill is called Predatory Strike, but come on, who says that? Narks.

Feel free to not read this at all since it will probably be trash. But this is something I decided to do last night. It just discusses the helices surrounding Hoodini, gear to take on Hoodini, and some vague builds you could probably run focused on him. Although my sniper Marquis will always be my favorite, a Hoodini-based build is a good lot of fun, and plus, it gives you hipster points!

What is a Hoodini, you may ask? Well, it’s not only an old meme that still fits for a good joke in certain conversations, it’s also the name of all of Marquis’ pet owls. (Like, I kid you not, every single one. Don’t ask me if they’re brothers or not, I dunno how it works. Wait. Do they have genders?) In-game, a basic Hoodini is on a ten-second cooldown and can be deployed at short range to reveal enemies on the minimap, as well as targeting them and attacking them over the course of a second or two. When a Hoodini attacks a target, it is going through a suicide charge that will leave it, of course, dead. At level one, an unaltered Hoodini will do 141 damage. Over the course of a match, Hoodinis can be altered to deal more damage, leave area-of-effect pools behind upon death, fire twice before initiating the suicide charge, reveal cloaked enemies in a small radius, and a multitude of other things. Hoodinis give off a little chime when they have detected an enemy - check the minimap to see who just popped up, or turn around before that dastardly Pendles sticks a Kama in your mainframe!

Hoodinis should generally be placed in passageways, behind Marquis, next to stationary buildables, or, to sum it up, spots where it would be useful to ward off attackers or know that there are attackers there in the first place.

[details=Level Two]At Level Two, you have the choice between Phaseflyer, Eyes Everywhere, and Hoodunnit. All three of these are actually awesome regardless of what they may seem like at first.
Phaseflyer makes it so that, once Hoodini has acquired a target through laser-designation, their frame will become impervious to damage as they enter a phase-like state where bullets or whatever you have will go right through them. Not only that but this option also makes Hoodinis fly through all terrain,
so when it says it guarantees a hit on target, it really does mean that. Eyes Everywhere is the mutation at this level, and it grants Hoodini the ability to automatically reveal cloaked targets. It’s about a 15-20m radius IIRC, and it reveals through walls. This is probably the best option for a pure sniper Marquis,
since it will de-cloak invisible characters and let Marquis see through nearby walls so he can better track his targets. Hoodunnit is pretty cool; it cloaks your Hoodinis! It’s useful for setting up traps or defending buildables, and has great synergy with a later helix. If you didn’t take Strigiform Swiftness at Level One,
I highly advise you grab this option(or *Phaseflyer if your enemies seem to be bad at shooting very obvious Hoodinis).[/details]

[details=Level Four] Okay, so at this level, nothing actually buffs Hoodini directly. In fact, this is a level for Marquis’ other awesome skill, Temporal Distortion. I just wanted to mention that, if you take Time Killer
and stack it with a later helix for Hoodini known as Windfall, you will devastate minion waves and really anything inside the time-bubble. I highly recommend this combo if you are focused on waveclear. You’ll find out what Windfall does later, but Time Killer gives your Temporal Distortion bubble 81 damage per second.[/details]

[details=Level Six]This is an interesting level. The left-side choice and mutation are what buffs Hoodini.
The left-side choice is Long-Haul Hoodini, and that increases Hoodini’s deploy range by 30%. It’s a great option for when you need to chase an enemy down with Hoodinis or harass the enemy team. Combined with the earlier Hoodunnit, you can stealthily pump out Hoodinis to fly behind your opponents, and give them a nasty little surprise. The mutation is Parliamentary, My Dear!, which I will refer to as PMD.
PMD lets you spawn two more Hoodinis, raising the maximum amount of active Hoodinis on the battlefield up to 5. This is a wonderful option if you’re into all that strategerie stuff about Hoodini positioning; placing them in ■■■■■■■■■■■ and by turrets and what not. Stacking two Hoodinis is already pretty neato, now you can stack two more and still have room for spawning one to use in general combat! Good for defending structures and yourself![/details]

[details=Level Eight]This is the final level that directly buffs Hoodini, and it’s pretty awesome. One may seem infinitely better than the other, but the second option has its uses! The first option is Windfall:
when Hoodini detonates on a target, it leaves behind an tiny area-of-effect zone that is around the size of Hoodini’s blast radius. This zone deals a whopping 720 damage over six seconds, clocking in at 120 damage per second. If this sounds broken to you, wait till you see how small the radius is.
It can be very deadly when combined with Time Killer at Level Four; when you use both of those on a minion wave, you will have at least 1000 damage dealt. - the max is 1206 without increased Distortion duration, and 1368 with increased Distortion duration.
The other option at this level is Hoot of the Vigilant. HotV makes Hoodinis fire twice on enemies before initiating the suicide charge. This option is better if the other team has mainly ranged characters. Hear me out, but remember I’m talking about placing Hoodinis to lie in wait for enemies rather than directly attack - if you like doing that, it’s probably best to go with Windfall. Anyways, HotV’s extra two shots seem to do around 45% of Hoodini’s default damage that scales with each level. It could be 50%, but I have skill damag on, which increases the shot and detonation damage, so it’s hard to tell. Overall, that’s about a 100% damage increase to Hoodini, presuming all shots hit. I say HotV is better for countering ranged enemies because the shots will track their targets accordingly even if they move. Windfall, on the other hand, will have its zone stay in place; thus, it is a better option for countering melee enemies like on Capture, since melees have to get close to you and you can just stand right behind the little shock-puddle. You may want to defend buildables from a majority-melee team with this option as well. HotV can be better when combined with certain gear, however, so keep that in mind.
[/details]

View on lowlidev.com.auThis is probably the best for when you need to make some room between you and advancing hobos getting a little too close for comfort. The Propulsor has secondary shield strength to help absorb a couple extra hits, but its legendary effect, while kinda gimmicky, can be helpful.
Just plop down a Hoodini and let that little owl knock them away. It’s a decent replacement for Waste Makes Haste, but remember that Marquis’ passive’s final hit ■■■■■■ as skill damage, and Time Killer
■■■■■■ as skill damage too. [/details]

[details=Codex Fragment]
View on lowlidev.com.auWhile this is seemingly made for more frontline characters who are likely to take damage, like Orendi, Foxtrot or Kelvin,
if you let yourself take a few bullets, you will gain Hulk levels of ragedamage.[/details]

[details=Cognitive Predictor]https://lowlidev.com.au/battleborn/#t=SkillDamage,s=predictor I’m going to bundle this one and the Golemic Sigil together. The main purpose of these secondary stats is survivability.
The Predictor will help protect from crits, and the Sigil just makes you beefier, increasing base health by about 15-20%. Don’t die![/details]

[details=Golemic Sigil]https://lowlidev.com.au/battleborn/#t=SkillDamage,s=sigil I’m going to bundle this one and the Golemic Sigil together. The main purpose of these secondary stats is survivability.
The Predictor will help protect from crits, and the Sigil just makes you beefier, increasing base health by about 15-20%. Don’t die![/details]

Cooldown isn’t really necessary since Hoodini already has a ten-second cooldown(Marquis has short cooldowns in general), but if you want to be a Hoodini factory, be my guest.

[details=“Greyhound”] https://lowlidev.com.au/battleborn/#f=Rogue,t=CooldownRedux,s=greyhound
My second favorite cooldown gearset in the game, pretty much all non-flawed versions of this gearset work for Marquis. Sprintspeed after pickup is on the Uncommon version, that could help if you dip into lane real quick. Since you’re spamming skills, the blue variant would speed up everything. And the Epic variant’s sprint speed is a small boost that could sometimes save your precious life![/details]

Hold up, wait, what? Wrenches? Whatchutalkinbout, Willis? Okay, let me explain. If you want to protect buildables, you might as well… build… them… right? Hoodinis are great sentries for turrets and supply stations and what not. 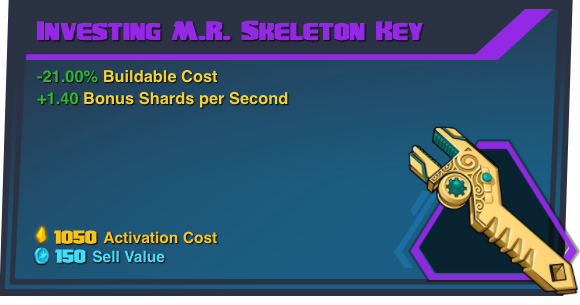 View on lowlidev.com.auProbably one of the best wrenches in the game. With this, you don’t even need a shard generator. Just hog all the shards till you get to 1050,
and then let your teammates do whatever. [/details]

Shard Generators
Same logic as with the wrenches.

I’ll just sum it up instead of fiddling with the formatting. None of the shard generator legendaries are particularly awesome anyways, except for maybe the Quarterymastery Bin and the Generous Refund Policy.

Playstyles and General Tips for Hoodini

Hoodini is a versatile little robit. You can use it to ward off attackers, secure a kill, protect structures… pretty cool, right? Shut up, I think it is.

While Hoodini-based builds will probably be frowned upon and generally won’t be as effective in the long run, they are useful if your team needs a builder or you just can’t aim as Marquis. Even with a pure attack damage build, i.e. a sniper build, Hoodinis can be used to see through walls or watch your back from assassins.

If you take HotV, you must have taken the invisible owls. Phaseflyer does not activate its effect while Hoodini firing those two extra shots, and the reveal won’t help protect the owl at all on its own. Oh, and you must have taken Strigiform Swiftness; regardless of what you pick at level two, if you don’t take SS at level one, your owls will be destroyed with HotV, unless your enemies are completely blind.

Whoa whoa whoa. Hoodini is a meme and not just a cool magician pun? Damn it Gearbox!

Oh my god, a response. Yay. One person conquered.

OK, now that I actually read through the thing, good job. I need to get back into playing Marquis, I’m a bit rusty.

Like I said in the closing notes that I probably didn’t really finish, a Hoodini-build is good for when you have trouble aiming with Marquis! And since you said you were rusty…

Well hopefully you guys like this, cause it took a stupid-long amount of time to put together

…i swear it wasn’t mostly just me being stupid and stuggling with copy/paste and formatting, i swear… I SWEAR