I’ve seen a few topics about farming bosses for legendaries (and lots of disbelief they actually drop at all), so I did a bit of digging and put together another visual guide to aid you Legendary Hunters plus a bit more information about how boss drops seem to work.

Important Note: As I’ve said before, the information I have data mined may not take into account changes applied through updates since I can’t seem to look at some of the new data files in the PC version of the game. But this info should still clear up a few misconceptions about how boss drops work.

First up, if you have done a raid in Destiny, you will know there are seperate loot pools for both Normal and Hard mode. The same thing applies to Battleborn bosses and mini bosses. Bosses will have 2 possible drops for Normal and 2 for Advanced, while mini bosses will only have 1 possible drop for each difficulty setting. However if playing on Advanced, you will have a chance of getting any legendary from both modes.

Hardcore mode plays no part in deciding which loot pool to use when rolling for a boss drop. To the best of my understanding, Hardcore mode only affects the rate in which in-game collectibles (health, credits, shards, extra lives) drop at, because you know, you are playing hardcore

There could be a scale multiplier that adjusts the drop rate in there, but I couldn’t see it, so take that as you will.

Unlike Destiny raids though, it doesn’t look like you get a separate chance for both Normal and Advanced drops if you kill a boss while in Advanced mode. Again, this is an assumption purely based on the lack of information I could find regarding drop formulas in the data. Loot Packs were a lot easier to determine this kind of thing. If someone can confirm getting 2 legendary drops at once from a single boss in Advanced let me know! It has been confirmed on multiple occasions that bosses can drop more than one Legendary at a time, however it often seems to be in the form of 2 of the same item and possibility limited to specific bosses such as Geoff from The Algorithm.

As for drop rates, all I could find were the base values. Regardless of mode, the base drop rate is the same for Normal and Advanced legendaries, however I believe you will have an increased chance of getting a legendary in Advanced because there is a bigger loot pool.

I’m not 100% certain these drop rate assumptions still stack up in the current sandbox. Several players have demonstrated that there clearly could be some bias towards specific legendaries, but the fact still remains you would have a higher chance of getting any Legendary on Advanced because you benefit from the bigger loot pool.

Finally here’s the infographic for all boss drops ordered by mission and the order that you encounter them within the mission. Question, do mini bosses you face during Rendain’s fight drop their respective legendaries? If so I’ll add them to the list. I had to manually link up boss loot pools to enemy AI classes in the data (and track down kill screen icons for them, some of which I am still missing) so I’m not sure if the re-match bosses can drop their respective loot

The mini bosses you fight in the Heliophage will not drop anything from their respective loot pools.

Legendary Boss Drops now has its own Rewards Page. 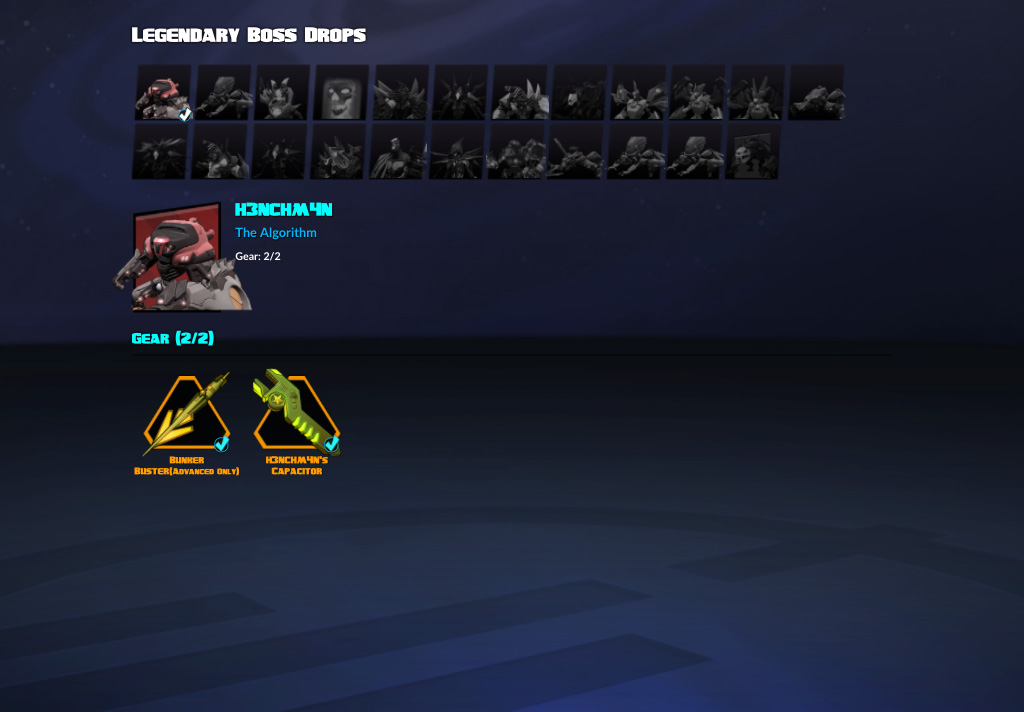 A complete list of Legendary gear that drop from story mission bosses in Battleborn.

Here’s a list of gear cards with their calculated max stats. However as I’ve mentioned in previous posts, some of these stats are being calculated wrong and I haven’t got round to fixing them! So please don’t treat this as a definitive reference until I can correctly output all stat values.

That image was kinda getting out of date, so rather than having to keep on updating it, everyone should just use the filtered list that is now available through my Gear Search app. I’ve also added a bunch of things to help make it smoother for those of you farming Legendaries

A complete list and up to date of gear obtainable in Battleborn. Filter results or search by name and find out where gear can drop.

Below is the original “Legendary Boss Drops” infographic.

80 Likes
Theory About How the Devs Increased Legendary Drop Rate
Question about frequency of legendary gear drops
Battleborn App - NOW IN DEVELOPMENT
Introducing: The Gear Search App
Want! so much want!
Getting Started in PvP for people that don't PvP
Gearbox Community Badass: lowlines
A Visual Guide to Rewards
Codex Fragment Gear
Where do I get vyns quiver?
Show Us Your Legendary Boss Drops Since the Hotfix
Normal/Advance modes drop different gear?
Anyone got a gear list? And gear info?
To Buy or Nah - Unofficial T2 Skin Evaluation
Legendary Boss Drops For Groups Question?
Introducing: The Gear Search App
taman999 June 7, 2016, 2:22am #2

This is great, thanks for putting it together!

This is VERY much appreciated. Kudo’s!

My oath of the sustained and Leechsteel brooch and Chrono key!!! no wonder I got 4 vow of vengeance
Have all the likes here just take them

This has got me soooo excited to play now oh my gosh thank you sir/madam, never playing normal again lol

The drops flagged as normal I’m pretty sure I’ve found some of them on advanced.

@UkyoSonoda As I stated in my wall of text that you possibly skipped over, you can get Normal drops in Advanced but you can’t get Advanced drops in Normal.

…I’m not sure this, one for all shield array, uh, exists. Not on the internet at least, if someone has had it drop, pleasee show it to me, it’s the one boss that doesn’t seem to have 4 drops, other than data that which has been mined states.

More lies and propaganda, everyone knows legendary gear from bosses is a myth, just a scam concocted to keep us grinding for weeks for nothing.

Could the drop rates be the same in normal and advanced? I get what you said about there being more items to drop and thus a greater drop chance. But what if the drop chance is set at, say, 3% for a legendary, and on advanced you have four possible things to get.

I may have missed something you said but If feels like this would be more likely for some reason. Oh and I love the infographic. Fantastic work with that.

What’s the base value for drops ?

@Nemosis327 The data is structured in a way where each item has its own probability.

Note: In actual fact, the difficulty check and the probability are the same thing and what happens is the game runs a check to see what mode you are playing on and will return a base value based on that. It only really comes into play for Advanced mode drops while playing on Normal where instead of the normal base value, it will return zero.

One way the data could be interpreted is the roll will randomly pick an item from that pool and then roll for the probability meaning there are 2 separate RNG rolls happening before the final result. (Which would really suck if this is how the game actually does it)

Or if you think of the item pool as being a pie where each item takes up a chunk of that pie and depending on which piece the roll falls on will determine what you get.

Personally I like pie better because it means you have a higher chance of getting something rather than nothing. Like I said, I am making assumptions here. At the very least, I can say with certainty that there are items you can only get while playing on Advanced and that playing on Hardcore does not have an impact what you have a chance of getting.

I’m looking forward to this week’s one about Star Ratings as that was going to be next thing I was going to look at until they announced it in last week’s Battleplan.

Finally some solid data mined information, this is much appreciated. You talked about propability values though, did you find any concrete numbers? I’d love to know the actual chances.

Ah and since noone mentioned it, the bosses before rendain don’t seem to drop anything but a few normal score + health pickups and an extra life.

Nice collection there. There was this spreadsheet in Google Docs that I did use for legendary items but this does make it more user friendly to look at. And for your question, I am certain that the bosses before Rendain lacks a loot table and will only drop the generic things like health and score points.

@DunkingMachine Because I don’t know for certain exactly how a legendary drop roll is calculated, and because RNG is a very heated topic, revealing any values I found would only do more harm than good. We all know they are very rare, but at least now people know to not keep farming for a legendary that only drops on Advanced while running missions on Normal. That right there could have been half the problem why there have been so many disgruntled posts about it.

[edit]
Thanks for the feedback about Rendain’s re-match bosses guys. I supoose it would be pretty OP if you could farm them but at the same time it would be nice if it was easier to farm specific bosses like how you could do so in Borderlands 2.

I think the answer is “You’re not sure yet”, but…

If I want an item that isn’t advanced only (so you CAN get it in normal), is it better to farm normal? Vyn’s Quiver, for example.

Less item possibilities, so you’d be more likely to get the item you want when a drop occurs.

So, we think that the system computes whether or not there’s a drop, then chooses from the available options as to what drops?
To use fake numbers: 3% * 50% for Vyn’s quiver on normal vs 3% * 25% on advanced?

@charlestmattson Hmm…If you look at it as, “do I have a higher chance of getting the legendary I want when i get my next legendary?”, then yes, you would have a higher chance of getting a normal drop while on normal (50% for boss drops since they will only have 2 possible items, and 100% for mini boss normal drops since they will only have 1). But to try and convert it into a raw % value without knowing exactly how a drop is calculated is definitely the wrong way to go about it and is ripe for misunderstanding.

Thanks for putting this together!!! Thank You Thank You!!!

I was one week and a half after the Chrono Key, 150 runs in The Sentinel, I asked here about this to any Gearbox Dev to answer and they didn’t have the trouble to reply my questions, they reply another topics but not mine. For that we got stick together if they don’t care about us. I was feeling like a fool, I was expecting the game since they announce, preorder the game 2 times because I preoder before and then after they include the digital deluxe edition, in the days it was avaliable and they give me the silence even with my post about the frustration I was after the Chrono Key.

I was feeling down after reading you post and ready to give up the game, I was doing the wrong thing this whole time, I’m with 349 hours in the game and promised myself that if I don’t get the Chrono Key this morning it was the last time I was going to play… and then I got doing some speed runs in Vyn Guardian, thank you very very much, I really like this game but I’m feeling a little betrayed for a company I support a long time.