This is a follow up of A Guide to Loot Pack + Taunts & Skins List which you can check out if you want to get a spreadsheet.

Tracking down all those sweet skins and taunts? Here’s a visual guide to all the ones currently in the game and where you can find them. A few things to note though…

If anyone has at least one of the Loot Pack taunts for a character I am missing the icon for, post a screenshot so I can update these. The ones that are missing are for Gallilea, Kleese, Montana, and Toby. If you want to find a preview of the loot pack taunts, try googling for the character’s name plus “hidden taunt” rather than the actual taunt name. You probably won’t find videos for all of them though since they are a very rare drop

It has been revealed that the 10th Color Skin that some of you guys have been calling “Black” skins are actually called “Cyber” skins. It looks like these will be Shift Coded out along with the remaining “Gold” skins over time starting with Oscar Mike and Rath during the next Community Event.

Created a Youtube Playlist with all the Loot Pack Taunts I have so far. Will keep adding more as I unlock them. People are also welcome to post their own video previews of hidden taunts I don’t have so we at least have a better reference than just an icon.

I have created a section on my website based upon these infographics but with the added benefit of being able to check off ones you have obtained (much like the recent feature I added to my Gear Search app). I am in the process of going through the latest big patch (which is going to take some time), but plan to hopefully get some updates coming to this and other projects in the nearish future.

The old Skins & Taunts page has been retired in favor of the new Character Rewards page, which now includes Character Titles! 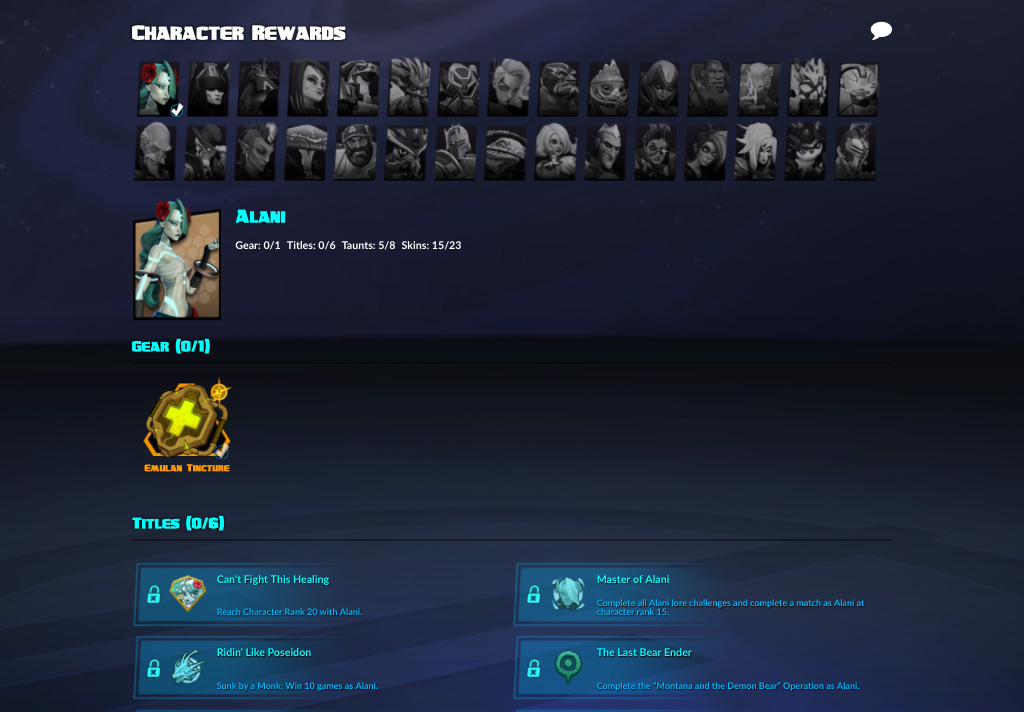 A complete list of rewards you can get for every playable character in Battleborn.

Here’s the old images, which I don’t plan on updating from this point forward.

Wow!!! This is Great man!!! ,Now I’ve a question… You say shift code promotion…What codes gave golds to deande??? and others??? The only ones I seen were for Isic, Shane &Aurox, and melka for beta players. Please let us know!!!

Yep there’s only the Open Beta gold skins and the Battleborn Tap Orendi reward at the moment, but Gearbox has stated their PR team will release the rest over time.

…I was considering leaving the other ones out since they are unobtainable at the moment, but since they are only really color changes I didn’t see the point. If these were more than that I probably would have taken them off as I don’t want to spoil stuff for people.

This is amazing and I wish I could like it once for each character, haha. It’s well organized and easy to see/read, perfect quick-ref to see what I’m missing. Thanks very much for your hard work!

They are also ordered by number. While taunts don’t follow this pattern, color skins (Tier 1) will always come from the same source and share the same colors.

Why can’t I hold all these recolors?

I agree. It can be super frustrating blindly opening Faction Loot Packs not even knowing if they will actually drop something you want (which is why I create posts like this, to reassure you guys you aren’t just dropping your hard earned credits into a well of nothingness). Overwatch has them all out in the open to preview, but the way i think you obtain cosmetic stuff in it is quite different to Battleborn. Some of the best taunts are hidden in those Loot Packs though and there’s probably not a single player in the world who has actually seen them all

…This needs to be stickied!

The only ones I seen were for Isic, Shane &Aurox, and melka

Nice!! I actually got super lucky last night and got the Rock Paper Taunt as well for S&A so I’ll update that one later today.

And hear is The Gunslinger Icon http://imgur.com/NREu3SP

Sweet. Mellka and Shayne & Aurox infographics should now be complete. I just need at least one hidden taunt for Galilea, Kleese, Montana and Toby

Sweet farming for them will post them if I get lucky!

Got some of those:

Sorry about the resolution, playing on Xbox, so screenshots are only 1280x720

Resolution doesn’t matter, I have the raw extracted textures sitting in a folder, I just needed to know which icon was for what and you sir/madam have done a great service to the community. I will get these updated today and then I can do “A Visual Guide to Loot Packs” post

I really wish there was a way to upgrade so I don’t have to spend 70 dollars just to get taunts since I bought the regular version.

The character skin & taunt infographics for the original 25 character roster are now complete!! Kudos to those that helped fill in the missing taunts.

Poor Alani…I unfortunately can’t do much about her unless someone knowledgable divulges to me how the update files are being applied on PC :’(

Just thought I’d add here that I was cashing in a heap of Credits into Eldrid Loot Packs (for Thorn and Mellka Taunts) and got an Alani taunt called Danger Splashdown. So annoying I can’t see these in the data