I haven’t seen this posted anywhere here. Here’s a link to the article referred to in yesterday’s battleplan 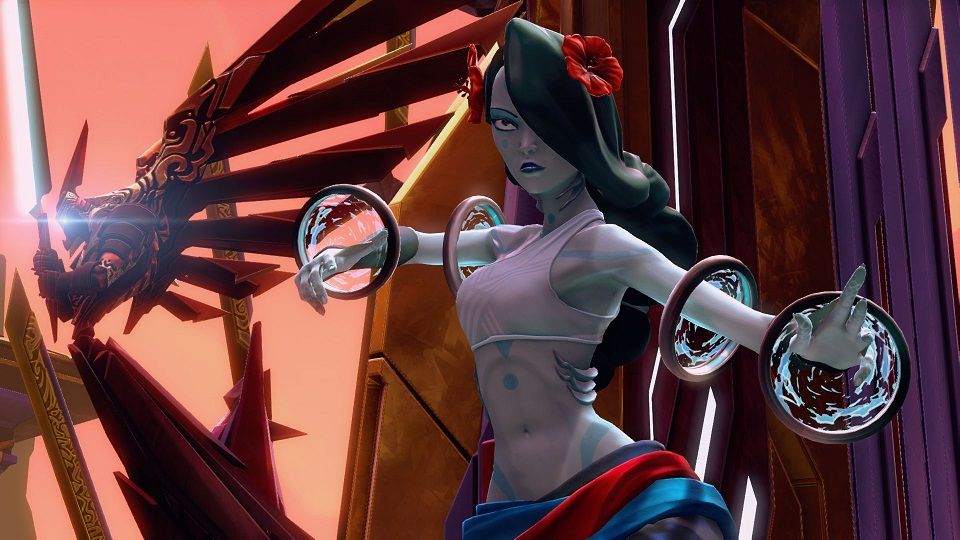 The 26th Battleborn, Alani, has made her battleground debut to a tidal wave of enthusiasm from the community. But who is she really? What’s her story? We managed to track down Battleborn Associate Producer, Anthony Nicholson for a few Alani tips and...

"How did Alani’s character come to be?

Alani is Battleborn’s latest and greatest in the Support class. She acts as an attack-healer hybrid that brings a new dimension to the game where the better you are at attacking, the better you become at healing. Alani’s character designer, Grant Kao, did a brilliant job wrapping these two roles into one by using a system that allows you to “fill” your passive ability, which directly affects your heal power, through landing hits on enemies. He also made quite a few augmentation decisions that allow the choice between heavier healing ability and damage, as well as the addition of crowd control effects. All of these things come together like a tidal symphony of power that makes Alani a true force of nature."

A DPS character with larger than usual health, small hit box and can self heal. GREAT IDEA

Dude. This is blowing my mind

“She acts as an attack-healer hybrid that brings a new dimension to the game where the better you are at attacking, the better you become at healing”

You know why it’s a new dimension and you don’t see it in other games??

Because it’s a terrible idea.

Wow, I thought this was just a balance issue that they weren’t sure how it would work in practice but it was planned?!

I missed it, thanks for posting.

And yet Alani is still pretty easy to kill with enough burst damage and decent footwork. Cry more kiddos the character is fine and heaven forbid she be fun to play too!
Yeah pretty sure I could murder Alani with rayna and hey I can support with her too!

And yet Alani is still pretty easy to kill with enough burst damage and decent footwork. Cry more kiddos the character is fine and heaven forbid she be fun to play too! Yeah pretty sure I could murder Alani with rayna and hey I can support with her too!

Pretty much this. Was playing yesterday with a group and we only lost one game. Almost every enemy team had an Alani.

Playing with a group is not a valid strategy for countering a character. The same strategy is applied and works to all other characters anyway and is not specific to Alani.

They just shouldn’t do anything exceptionally well. So the concept of an attacker/support/controller is fine as long as the numbers work.

It seems uncalled for that they “intended” for her to be OP. The HP nerf normalized her quite a lot for now and GBX said it’s temporary until they figure out more appropriate permanent changes for her.

In my opinion. An attacker should not be able to burst heal and still do decent damage. It overshadows straight up attackers.

Regarding Melllka and miko, they are already an outlier due to their DOT. Even that is an iffy effect. This game is about calculated risk and then dot creates a situation to turn the tide (eg the opponent escapes or the attacker disengages you can still get a kill) even after the battle is decided .

I agree that Healers generally should not have the damage capabilities they do, I’d like to see them focus more on Support, but my point is balance always boils down to numbers. There’s nothing inherently broken about doing healing and damage equally if it’s done properly.

I agree with you that if the numbers get fixed the idea itself is fine. Personally I feel like gearbox is not doing a great job at identifying which numbers are making and breaking characters. Alani’s healing functions almost identically to Reyna’s version of support: target player and burst heal(health+shield in Reyna’s case) Reyna is in a good place balance-wise, I think most people would agree. Here’s where things start to break for Alani- her healing is based on an alternate fire and has no real cooldown except how fast she generates stacks. Her total heal can overshadow Reyna’s heal+overshield and due to helix upgrades her “cooldown” via stacks shrinks down to about 3 seconds or less. Imagine if Reyna could overshield twice as often? It’s basically like if Reyna had a helix saying “shots on an enemy reduce skill cooldowns by 1 second”. And this isn’t even touching on her actual skills, just her alt fire healing.

Alani begins the game acquiring level 3 Osmosis in ~5 seconds. With all helix choices that goes down to about 4 seconds. It takes +Attack Speed gear to get her quicker than that. No way it will reach below 3 seconds, I don’t think. It would take very good +Attack Speed gear in all 3 slots.

Reyna also doesn’t have to constantly attack enemies to rescue teammates. She’s far more consistent at it for that reason.

Personally I’d just lower Alani’s damage a bit (I would probably lower all healers’ damage) and possibly increase their healing throughput slightly, if needed to compensate.

Mostly the healers just need targeting fixed. Reyna’s & Miko’s buttons can require multiple inputs before they do anything and Alani accidentally heals mobs all the time. They need to just give an option to prevent mobs from ever being targeted by heals.

True, Reyna need to wait for 12 seconds instead.

alani and reyna together are the death of me. anyways, i’ve had a change of heart, and that is alani is OP.

her self heal and cooldowns are ridiculous. it’s the worst when playing ambra (most nerfed character of them all) and you know you’re the kill to get.

WOW, way to come around.

Welcome to the club sir.

She can put out significant heals, second only to Miko, she has amazing wave clear, she has two forms of CC, one of which has a damage amp ability that puts the enemy in clear line of sight of everyone on her team, she has an ability that speeds up teammates, her auto attacks do real damage and she can easily top damage charts, and she doesn’t have to choose between any of it. She gets it all so long as you upgrade her properly.

Her small health pool really doesn’t matter when she can top herself off from less than 20% within a few seconds with a three stack osmosis wellspring and a healing geyser.

Her only real short coming is that she’s slow but it doesn’t matter because if you position yourself properly you never put youself in harms way.

The character is better than the Beta version of Ambra ever was, even though she was severly nerfed.

I get crazy staying power with mellka using the right regeneration loadouts. Putting that stuff on Alani…you basically have to try to die.

You should know this…