Battleborn at the top of this week's UK charts

Battleborn seems to have won gamers’ hearts as it has managed to dominate the UK charts (which are used as representative of the whole gaming community by many site) this week.

Gearbox's shooter is the first No.1 for Take-Two in over a year.


The game itself has made a good start despite the Beta of another popular game happening right now. In fact, I see more and more people on social media talking about the killed hype of the implied game. So, if you “fear for this game’s future”, these observations might somehow put your worries at rest.
6 Likes
I'm done with battleborn
salsacookies1 (Salsacookies) May 9, 2016, 1:33pm #2

So… Battleborn’s NOT dying by the end of the month? But the Steam. The STEAM SAID IT WOULD DIE!!!

Should link this in the Steam forums where there is a cancer of negative posts with no intelligence.

I am in US and I get matches almost instantly.

If you simply glimpse at the Overwatch forums its obvious the game is collapsing on itself. There just isn’t enough there in that game to attract the masses. Its designed from the ground up to be a pure Esport. I think Blizzard made a mistake having an open beta. They would have sold more if they just had people buy it out of pure hype without trying it first. Ironic that they had the open beta to try and kill BB.

Battleborn on the other hand is just all around a blast.

A few more details on the UK chart:

[QUOTE]It did get to number one in the all formats chart, but could only manage as high as number three in the individual formats charts – being beaten by both Ratchet & Clank and Call Of Duty: Black Ops III.[/QUOTE]

You can see the tables for these charts in the link above, where Battleborn came 3rd and 4th in the individual formats chart but was 1st in the all formats chart.

[QUOTE]The multiplayer online battle arena game made 52% of all sales on PS4, compared to 45% on Xbox One and 3% on PC.[/QUOTE] 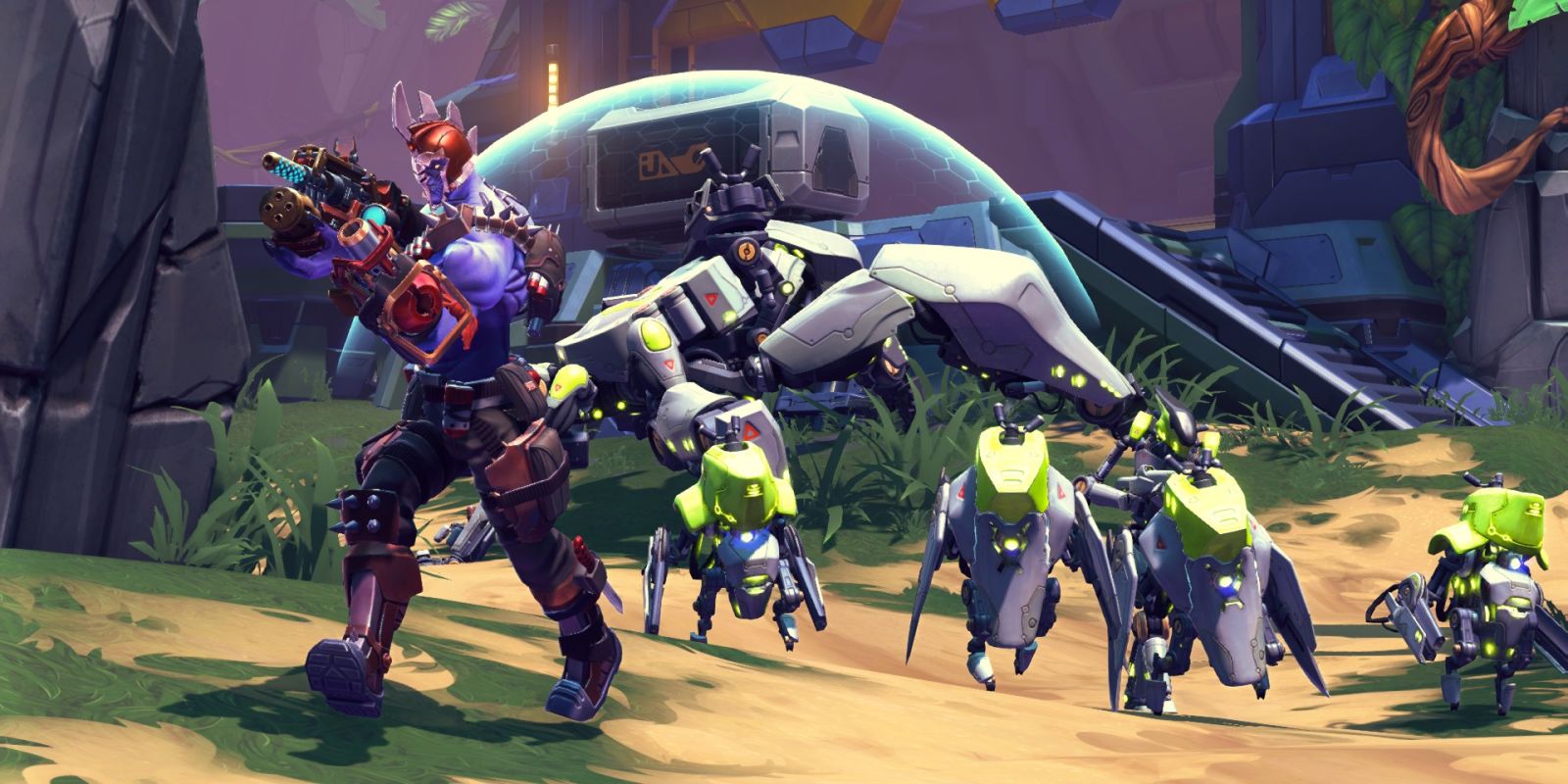 So it’s no wonder that those buying it on Steam are complaining that it’s DOA, hardly anyone bought it on that platform compared to the PS4 and Xbox One.

2 Likes
I am "seriously concerned" not "cautiously optimistic" for Battleborn
fivedepluto (HelloDolly) May 9, 2016, 2:20pm #8

Yeah, poor PC, sucks that they got short straw population wise. Maybe they should try to set up cross platform play with the XBONE.

Silly haters are the loudest… They’ve always been…

There’s more reviews up for the PS4 version than the other two and XBox One version has only 6 reviews.

I can’t understand the low reviews from some of those critics either. Having seen some of the stuff written (including that Battleborn IS a MOBA when we know it isn’t really), I just don’t think that some of them get the game. On top of that, you get IGN scoring it with 71 and yet IGN Spain (so same group, different country) score it 77 suggests to me that their reviews are just subjective based on the person who wrote it. If Battleborn isn’t their cup of tea then they rated it down, otherwise it got a better review.

It’ll be interesting to see if phrases like “The combat is frantic and tense, but often feels samey and superficial.” (in the GameSpot review) will be used when they review Overwatch…

Not to imply a trend, but…

There have been several instances where team based games have grown exponentially as standing users have convinced those around them to purchase it and “team up”.

Yup, if you really enjoy the game, and want to be around for a long, long time, with oodles more content, best thing to do is tell everyone about it.

Ironically. Save for the people who know me best, few know I’m a mod on these here forums as everyone assumes my shop keeps me busy 24/7.

I had people texting me or sending me messages going;

“Hey, have you tried Battleborn? Get it when you close up today and we can play.”

Saw one Madridista who I’ve only seen on two games in my life; Fifa 16 and CoD get it. So, that shows the pull.

Should link this in the Steam forums where there is a cancer of negative posts with no intelligence.

I will definitely do that. Steam forums and reviews are cancerous, with no moderators at all and rage posts everywhere.

I am in US and I get matches almost instantly.

I live in Greece, where gaming is hardly considered a hobby and I constantly get matches in 1 minute or less with people from all over Eastern Europe.

You can see the tables for these charts in the link above, where Battleborn came 3rd and 4th in the individual formats chart but was 1st in the all formats chart.

I do not believe a multiplatform game’s resonance should be judged based on individual formats charts. But I am no expert, so I cannot really know.

Its designed from the ground up to be a pure Esport.

I totally agree. Tried OW last night (played about 6 hours) and it’s obvious the game was designed with a specific meta and specific strategies in mind. This is no surprise, as Blizzard’s aim in all their latest games is to restrict players’ imagination and direct them to certain playstyles. It’s much easier to maintain a game that way instead of having an actual thinking and imaginative community.

I live in Greece, where gaming is hardly considered a hobby and I constantly get matches in 1 minute or less with people from all over Eastern Europe.

Still have family from my paternal grandmother’s side in Laconia and Epirus.

So a quick HELLAS, to you.

May their lives be long! Να ζήσουν!

as we say here.

I don’t know, man, I don’t know. I’d really like a blizzard product to finally fail - because it would mean people finally realized how bad they have become. Well, no, not “bad” per se, but how far the apple has fallen from the tree. Shadow of a former glory, really. I just hate when a game can’t work on its own merit anymore and has to fall back on ultra heavy advertising and viral campaign to hope to survive. They were the guys who cancelled Lords of the Clans and Starcraft Ghost because they didn’t net “Blizzard quality”, for crying out loud !

Anyway, I don’t know about the US player base but here in France, the collective hype about OW is real. Everyone’s playing left and right. Actually, I don’t even know a single French Battleborn player. The biggest videogame review website ( sadly completely owned by partial medias ) even reviewed Battleborn with a 13 out of 20, which is extremely low for them - the “average” note usually is around 16. Their cons list is laughable, and just tells anyone who played more than 10 hours how clueless the reviewer was.
“Only three game modes” is indeed a little flaw, but I can’t wait for them to praise the three extremely similar gamemodes of Overwatch.
“Looks too much like Borderlands”, which… Isn’t a negative and isn’t even educated : it just doesn’t look like Borderlands. If anything I’d deem it more similar to Wildstar.
“No depth in gameplay”, yup, they said it.

But yeah, the French playerbase is probably one of the worst. Toxic, uneducated, completely sold to “higher powers”, they’d rather wait for someone to tell them to buy product X than try it and see for themselves. And since BB had almost zero ad campaign, and people mostly thought it was an Overwatch-like, they didn’t see why they’d “waste” time with Battleborn. And, hey, look! There was an Overwatch video with a cute little gorilla, so the game must be super good !!1!

Sorry for the rant. Sometime, I just wake up depressed by my country and fellow players. Fortunately we have a bit of renown in the Versus Fighting field, which is better than nothing, I guess ?

You confused my American. I cannot Greek. Does not compute.

Nice to know it’s doing well. I love this game so much.