So the other day I was looking at the Kleese Let’s Play and I saw an interesting achievement called “Rise of the Battle Throne”. The description of it is… “Play Kleese at least once in every map in the game” and the progress on it was 1/14 ( you can see it here, watch the left side of the screen as the match ends https://youtu.be/cjINo284mcY?t=21m10s ).

That’s quite a few more maps in the game than I expected to be honest, plus the number could increase between now and release. And although I’m not talking about competitive exclusively, I saw this unrevealed competitive map in the video at the top of Galilea’s character page (it looks kind of similar to the meltdown map but I believe it’s a different map):

There’s also this volcano-looking map for the Capture gamemode in this Kleese screenshot: 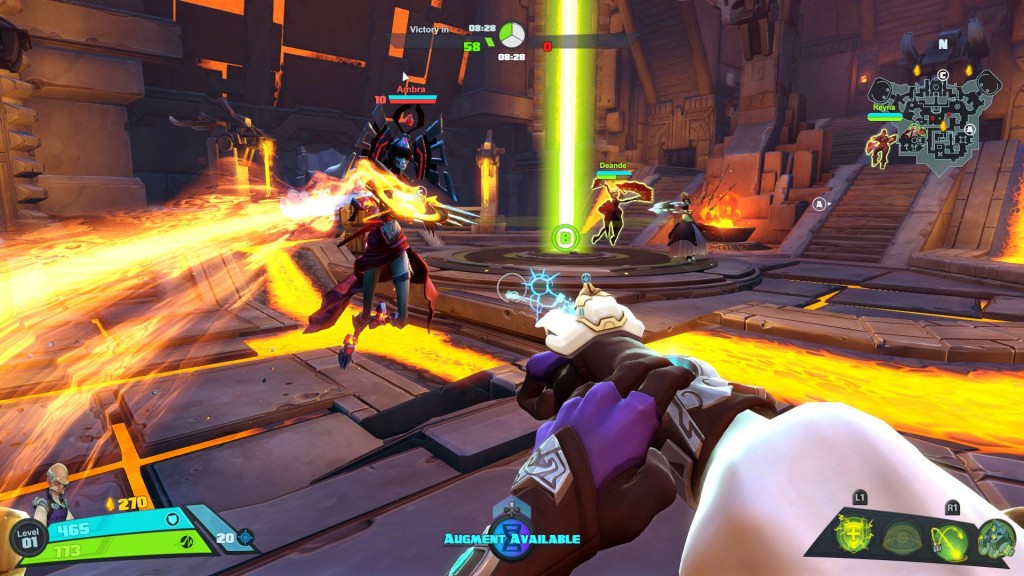 Where does the Battleborn community want to go in this game’s universe? Personally, I’m looking forward to perhaps seeing a LLC-themed map with super high tech society, that’d be awesome.

I am hoping that the meltdown maps will be different than one another. Like heros of the storm levels. Different objectives and things like that. Change it up a bit.

After I posted this I went back and checked the other character previews and found even more maps, too many to really post here (maybe I’ll start a collection?). I agree though, hopefully the maps don’t just look different, but play different as well. Variety is the spice of life, as they say.

I’d like something in the asteroid field. Orbital platofrms connected by light bridges, lighter gravity, and the constant threat of decompression would make for an interesting match.

Or maybe something in the nebulous void of empty space. Fighting for an objective in the heart of a dying star before the Varelsi finish swallowing it up. Bonus hazards include the Varelsi themselves showing up to attack everyone at random intervals.

3 maps (one for each game mode) for each faction’s “planet” is optimistic thinking, but with the ambition and resources gbx is utilizing, why not? a great bridge for pve and pvp players could be the maps with missions and multiplayer modes exploring different facets of the same map…

This might not be that far off. That’d be 15 maps which there currently seems to be 14 (it is possible that the achievement was including story mode maps, though). I also saw what seemed to be a Jennerit competitive map in Attikus’s character page video preview.

14-15 maps for multiplayer would be pretty insane but it’s not impossible.

stage hazards would get really frustrating IMO. I generally want to be focused on the enemy rather than the stage, and while it could add an interesting twist, dying to stupid things like falling gets really frustrating.

I wouldn’t call them hazards, but more ‘humilation pits’ where players can knock enemies into for gruesome, embarrassing kills. Or players can stumble into themselves if they are blind.

I hope there are maps that contain more verticality. Also in meltdown, it would be nice to see asymetric level designs. There could be a side better for snipers and the other for close quarters.

Looks like the first map screenshot I found was for the Incursion gamemode.

Having played my fair share of destiny, I am a little weary of asymetric levels

I am worried some levels might hurt the slower characters too much.