Hotfix after hotfix theres a Tiring amount of ppl on this board saying our problems dont exist. Its nice to get recognition from ppl with a wide audience.
Know ur not alone.

If true this will be what? The 5th week in a row they have said they’ve fixed something related to drops and didn’t manage to quite pull it off… YIKES!

The loot and patches of this game have become truly meme level. How this game can screw up patch after patch to address the main purpose of the game is just astounding. They have 2 loot driven events going on…both of which are going away soon but the loot is broken and the scaling is broken. People wasting hours upon hours farming things that they can’t even get because the game is broken. It’s mind boggling. 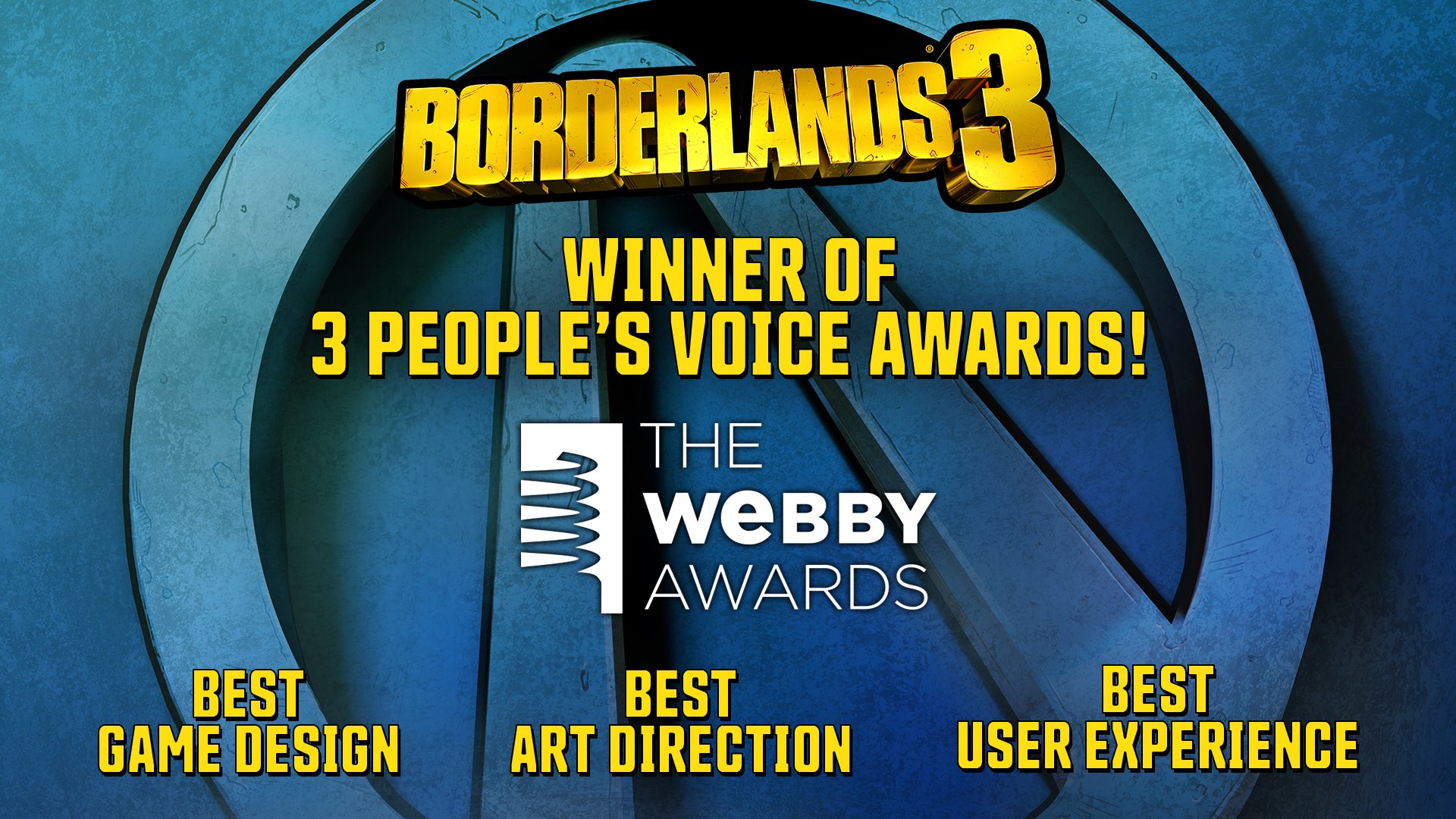 We’re honored to have won 3 People’s Voice Awards for #Borderlands3! 🏆🏆🏆 Thanks to @TheWebbyAwards and all the players who made their voices heard!

I believe a chunk like more than 70% arent even playing so they just have fond memories like us before mayhem 2.0

Part of me also believes its industry fixed.

I mean think of the star power in this game

Yeah it’s pretty low, apparently all GB staff are paid basic wage but they get a share of the profits if the game is successful ( which bl3 is the best selling in the series )

The greed is real out there no tin foil hat needed

Accusing gearbox of corruption on their own forum?

Really not cool. Not even in jest.

Since the latest hotfix where takedown loot pools were supposed to be corrected I figured 8 would take the opportunity to farm for kybs and redistributers… 234 Wotan kills later of just killing the top half and the brain (since we know the leg loot isn’t scaled to Mayhem 10) and not ONE, not a single drop of either e redistributer, kybs or moon fire… Ffs gbx… This is just unacceptable on every level. No wonder the player base has twindled to near nothing. Everytime a hotfix is out to balance or …

Why do you need someone else to prove it to you. All this garbage in the topic feed is getting old (my personal opinion).

I still run the Takedown for Mods till they disappear when the weapons get fixed, always something to shoot for.

Edit---- content change as I had bad info…Prowler and I hit the board at the same time.

You are welcome, testing you did would have drove me nuts and I don’t mind a grind. I just hope the devs take a good look at threads like that and get some steerage on identifying a genuine fix for all the droprate issues.

I agree, it’s frustrating and disheartening to feel as if issues and concerns are not acknowledged or addressed.

Its honestly needed. Posting on most forums will be ignored, there hasn’t been a bl3 general on chan since november, reddit is ignored, and here people can at least hope they have somone in the office to look at this. After the repetitive mess ups the accusations will pile up because it’s just too shady

Very welcome, your post was noticed and I hope you got some sweet mods for that effort!

. After the repetitive mess ups

That would be incompetence, not corruption.

For the most part, people can and do accuse GB of incompetence on these forums frequently. So long as the post doesn’t devolve into directly insulting GB employees (you can say someone’s work is bad without insulting them directly) it’s allowed to stay.

What you can’t do is insinuate that because the game is a mess, GB is paying someone off for awards. That has a much higher burden of evidence, and also doesn’t have anything to do with the game being messy.

We do need to make our issues known to GB. We do need to let them know when their handling of the game leads to decisions that turn players off. We don’t need to make unsubstantiated claims about them bribing their way to useless awards. If you want to do that you can always do it on Reddit, but no dev would gain anything of value by reading about that here.

If the goal is constructive criticism, keep in mind what it is you’re criticizing. This issue won’t help the game at all.

I run takedown then cartel, takedown-cartel for almost a week now, probably 50+ wotan kills and no redis, kybs, tiggs or moonfire.

Got a few m4+ legendaries though, so all good.

Given the reports that TD was a mess I stayed out of it and did the Villa / Trial loop going after each lootpot in turn to gradually refresh the bank.

Made the odd side trip to Traunt / Geneviv still not got a bloody Geneviv drop though.

If you’re on pc I can hook you up with a reflux, I’ve got many in the bank lol

PS4 I’m afraid but thanks for the consideration. Besides, grinding is part of the sweet satisfaction as long as it’s not too long, looking at you Gearbox.