I am currently working on recreating all of BL’s guns and loot system as best as I am able inside of Fallout 4:

There are differences, as one would expect between how weapons are generated between the two games. Namely, a weapon must spawn with all of its parts at a single time inside of Fallout 4, which means that things like titles and - most importantly - proc rates must also be applied at the time that a weapon is spawned.

What this means is that a weapon with a very low tech level can be generated with a very high proc rate, which is of course nonsensical according to Borderland’s rules. (Similarly, titles can be applied to weapons which violate the conditions which need to be met in order to apply said titles.)

I’d like to get some different thoughts on how to best translate proc rate and tech level specifically into Fallout 4, recognizing that both will have to be retooled in some way to work with each other and still be meaningful for influencing a weapon’s stats.

Some ideas I’ve had, and tried in various ways are:

And so on. Both properties can influence damage and % to apply elemental effects in some way it seems which would be ideal, but I hope some others on the forum can weigh in about what is most important about representing either of these in a different engine and crucially what a weapon with a high tech level but low proc rate would mean, and vice versa

(BTW, tech pool isn’t something that I would know how to support, so tech cost based on proc rate is probably only going to be useful in writing a formula to translate values from Borderlands into Fallout 4.)

8 Likes
Borderlands and other games with loot
Random Talk Thread Mk. II
What was the last game you played?
nbrownlie237 (The One-Armed Bandit) November 1, 2016, 9:31pm #2

This is a pretty cool idea. Unfortunately I don’t know a lot about the mechanics of Fallout, so I can’t help you with the tech level - elemental status difficulties, but if you could do this it would be seriously awesome.

No offence but i really wanna see this glitch and a weapon spawns with gamebreaking proc rate and crashes the game, lol. Good luck with this though.

I believe I’ve hit upon a formula which should work pretty well for balancing proc rate and tech level:

For a given assigned proc rate, the formula to calculate proc chance goes:

Some explanation: the proc rate determines size of the status effect as well as applying any relevant elemental damage multipliers, just as it should. Tech level determines the chance to apply those elemental status effects.

Thus, a weapon may spawn with a very damaging x4 proc rate, but may also have a low tech level, decreasing the chance to proc. This should guarantee that elemental damage dealt by an elemental weapon over time still depends on the quality of its individual parts.

Going down the right most column the chance to proc increases dramatically from 12% to 42% depending on tech level. Only a 12% chance to apply a very powerful x4 proc effect with a crappy weapon seems close to fair.

I’d still like to factor tech level into modifying the elemental damage of status effects or proc explosions but hopefully without getting too muddled. Four modifications for each proc rate for each element type for each tech level is already 4 x 4 x 4 x 4 = 256 conditions to track.

Fallout 4’s engine doesn’t compensate for when the sum of the bonuses from weapon modifications results in a less than -100% modifier.

In Borderlands, when this happens the reciprocal is taken and multiplied against the base value instead.

What this means is that some combinations of parts can result in dropping some stats like fire rate and reload speed to zero, in Fallout 4.

I’m going to have to recalculate all of the negative bonuses from different parts to make this work.

Alright, the way this is working with material grades/manufacturer is that I have an opportunity to use the vending machine phrases for mod descriptions, which is fun, but there are only two of them written for each weapon in the game.

I’d love to get some suggestions for other phrases to use for 2 extra phrases, for each of the 9 manufacturers

For reference if you don’t already know these by heart, here they are.

It took a while and there are a few issues and I haven’t figured out burst firing while aiming down sights, but here is working burst fire for combat rifles (and any legendary effects) in fallout 4:

…working the day before yesterday. Since changing something in the script, I broke something and can’t seem to get it back. But at least it’s possible!

Well aside from other things, I now need to make from scratch all of the actual weapon model parts:

and with so many triangles and higher resolution textures

Dang. That’s gonna be a lot of work.

Jakobs. And yet I think the Atlas revolver looks more like a Jakobs revolver:

Something I never noticed before was how revolvers are actually reloaded in BL, which isn’t at all like how a regular revolver is.

The entire cylinder comes off the peg/rod or whatever, when unlatched and is dispensed and replaced with, instead of as usual where the cylinder remains attached, and instead bullet casings get pushed out and rounds are reloaded (like as in the sniper reload animation) with a moon clip.

Because of this, the part of the revolver body that unlatches with the cylinder is going to have to be flipped, to allow loading from behind with a clip in Fallout 4 instead of from in the front, as in BL.

Getting started on making textures and finalizing effects for different elemental damage types and parts on the models that glow. Still going to take a while.

The reason why everything is grayscale is because I want to experiment with using color palettes, which in Fallout 4 essentially enables grayscale values to be assigned colors from another texture, read from left to right, based on whatever values correspond to 0-255 in the original image. That should make swapping colors between different manufacturers much more feasible instead of needing to create as many duplicate textures for each weapon part, which would quickly bloat file size.

And I made my own bullets 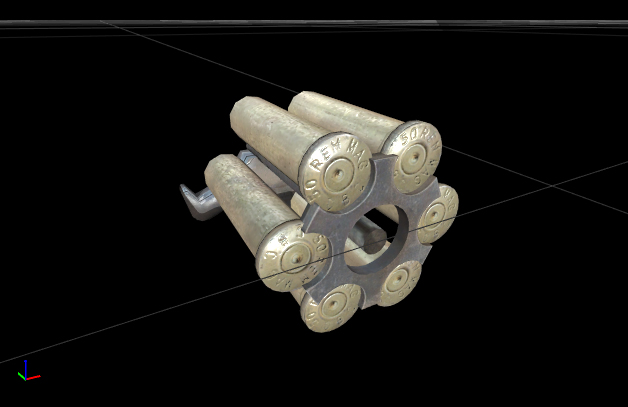 Pretty much done with the DAHL revolver:

I goofed and lost my .psd with the first revolver, but not all is lost. Just 20% of what I had planned, and which I’ll have to remake in some way.

From the center, moving up and CW: No, 4/5 of these manufacturers never made revolvers but I get to do what I want.

Another update, finally getting to see these things in-game (early WIP textures and materials): Here’s a cryo-Vladof revolver, totally a modded gun and not vanilla: Just felt like saying that it’s been great seeing this develop before my eyes so quickly. I won’t be able to try it out when you do release it, but it’s been a real pleasure seeing it happen in such a short timeline. Seriously, it feels like it’s only been 3 months since you started the idea, and to see that sexy handcannon up there so quickly is just awesome. Kudos to you.

Ok fine it’s has been three months, just saying most projects don’t skip along this quick.

Wow, just got into Fallout 4 and already I’m interested. Best of luck, I can’t wait to see how the end result turns out.