This should be compatible with existing Blitz saves. Artifacts spawn at a 1% rate, and normal elemental artifacts are weighted 10:1 vs the 3 pearl artifacts. (Someone let me know if this is too low, idk)

Hey so I figured I should post this here. After @SleepMaster discovered how to load custom characters, I decided to make an edit of Roland with some cool skills and stuff. Here’s a picture of his skill tree, and a temporary link to where you can view it in detail: 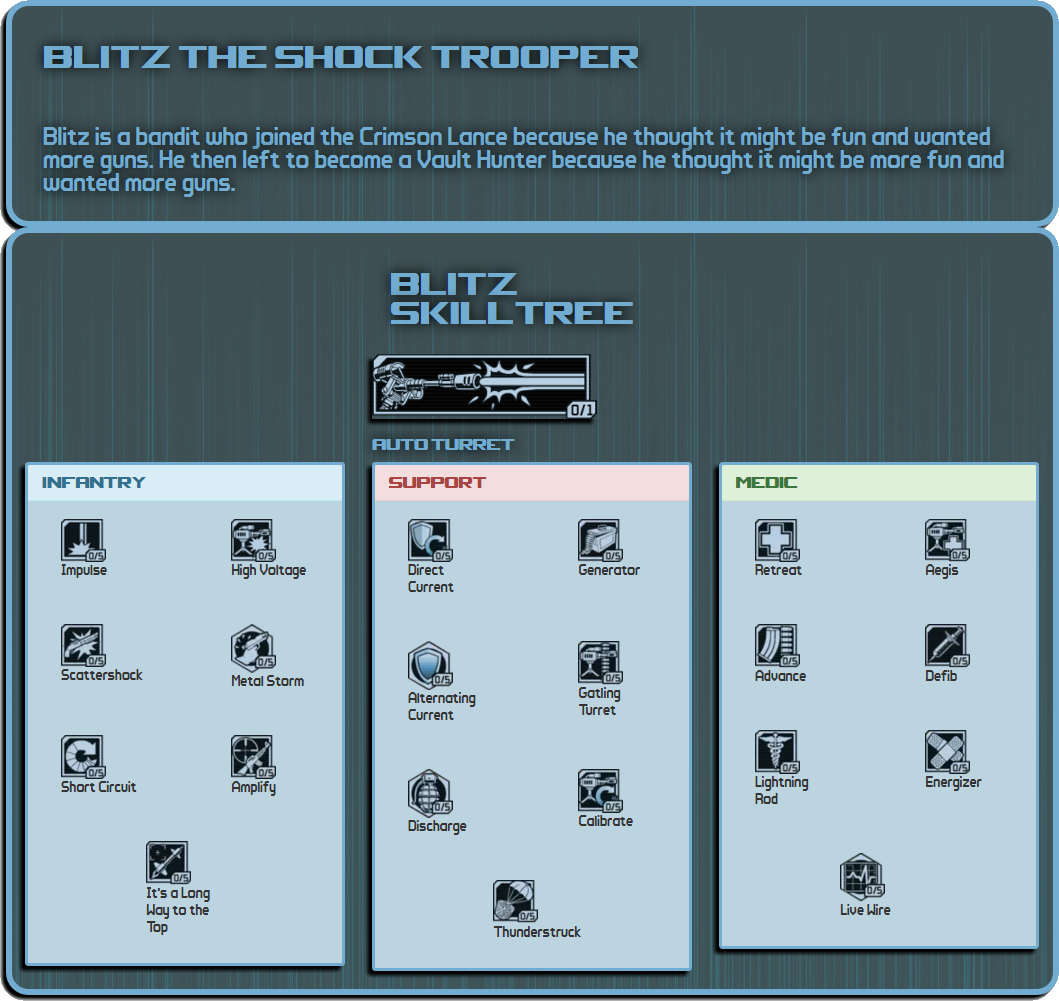 And here’s the original gameplay trailer

Get on with your bad self (and nice video)!

Looks fun and a great way to change up the game a little bit i think i will give it a try.

downloaded and will try at weekend /looks good from the vid

Thats really high quality Nola. You took care even about the smallest detail. Just from watching video I can say its masterpiece

I just love it, cant wait to test it out.

But tell me how did you get experience working? For me experience bar is not filling for some reason on custom characters

@SleepMaster Thanks! Yeah there were a lot of little things I had to get right. I added the Mohawk items because you can see the Mohawk in first-person if you look up or sprint, which might get annoying.

One thing I noticed is that when you use one of the Mohawk items, it adds an extra hidden slot to your backpack, effectively increasing your backpack size ( not sure if this is permanent or just lasts for the session). Have you noticed if that happens with you or Grimmjow’s spawner things?

As for the experience stuff, I’m not really sure. It just worked for me. One thing I did, however, was to NOT change the object name of anything I duplicated/renamed from Roland. All of his skill definitions are still named things like Supply Drop and Aid Station. The same goes for the character class itself, and all of the stuff that goes with it. It is still called CharacterClass_Roland or whatever.

I did this because I was paranoid that I might break something by changing the name. For example, class mods reference weapon types by the name of the WeaponType definition, so if you rename one something like WeaponType_MyAwesomeShotgun, it won’t receive things like the Commando shotgun ammo regen.

Okey I think I know what might cause it there is skill adrenaline_roland and I renamed it to adrenaline_sleepmaster, that might be the case but i am not sure though, I will need to do some testing.

Never saw anything of the sort happen.

@Mr_GJ Just tested it with both your Vial and my Mohawk, and they both seem to do it, and it only lasts for the current session. It’s only noticeable when your backpack is full, since there is no visual cue that your backpack size increased. Essentially, if i have 14/14 item slots filled, and use the Vials/Mohawks x amount of times, I can run around and pick up x amount of items and overstuff my backpack.

I personally don’t think it’s that big of an issue.

Oh in that way, sorry I misunderstood. I thought you meant to say equipable slots. But as in backpack expansion, yeah that was noticed. Never did anything with it because most peeps who use my stuff have modded inventories of like 100 >.

We can haz new classes? Sweet!

How about Mini Steve, or Crimson shorty? They’d be awesome!

Off-topic: What does the adrenaline_roland skill do, anyway? I can’t for the life of me figure that out.

Holy ■■■■, Scattershock with a Jackal is insane. It’s like the vertical grip on steroids. I’d try it on a Boom Stick but I’m scared of the possible framerate drops.

Also I know I said this on your YT trailer but a corrosive rework of Mordecai would be sweet.

Lol yeah Scattershock is pretty crazy! I actually haven’t tried it with Carnages or Jackals, for some reason, but that sounds really fun. I think it gets pretty OP with a +4 Scattershot Commando COM (Roland), but if I were to make class mods for Blitz I think I would avoid making one that boosts it. +9 projectiles is basically a ~100% damage boost for most shotguns (and 900% on carnages and jackals I guess, but they kinda almost deserve it).

As for the Mord, it’s one of multiple ideas I’m considering, but I won’t make another character until at least sometime in the summer when I have more time.

I’m currently playing Blitz and I love it.

Just a few things I noticed and I didn’t like:

Am I doing something wrong? I’ve done as the installation instructions read to do and I have no indications that this is working. Played up to level 5, deployed my turret and it’s the default Scorpio turret Roland has. Help, anyone?

mine did the same .if you look in your inventory it will probably say soldier in the stats page and also in willowtree
cannot remember what I did to put it right ,think I just reinstalled the blitz char?

is this mod only for enhanced? or can this be played with older version like 1.4.1 without the GOTY