I wouldn’t be surprised if so called “Borderlands 3” is released in 2019 cause that would mark the 10th anniversary of when the Borderlands franchise made its debut. Till then I’m waiting for ya “Borderlands 3”.

I think it’s fairly clear it’ll be out around summer next year.

Has it really been almost 10 years already? Damn, time flies.
I love this franchise though.

Yup. Closing in on the 5th anniversary of BL2 as well, and not a peep for that.

The Fifth Anniversary of Borderlands 2 is Imminent! What are you going to do to celebrate?

I’d just like to add, for those who are begging for them to hurry up, stop it. So many developers rush to meet deadlines and release incomplete messes. I applaud a developer who says “screw you” to deadlines when it isn’t ready. I’d rather wait another 2 years and get something amazing, than be playing it now thinking “what the hell did they do to this series?”

I can wait, plenty to do on Pandora and Elpis in the meantime

Where Brick’s fists are replaced with Sock’Em Boppers (who remembers those?) to avoid being accused of promoting violence, and Bloodwing is replaced with a drone to avoid promoting animal cruelty…

I did make some new Borderlands 1 wallpapers when that game hit backwards compatibility on Xbox. If you guys are interested in more Borderlands (1/2/3/TPS) wallpaper i get on that.

Didn’t see this on the search results but the Borderlands social media did point out its been 10 years since the game informer article:

It’s been 10 years since @GameInformer first revealed Borderlands. Dive into the past with a reboot of the reveal ➜ http://2kgam.es/BL1GI 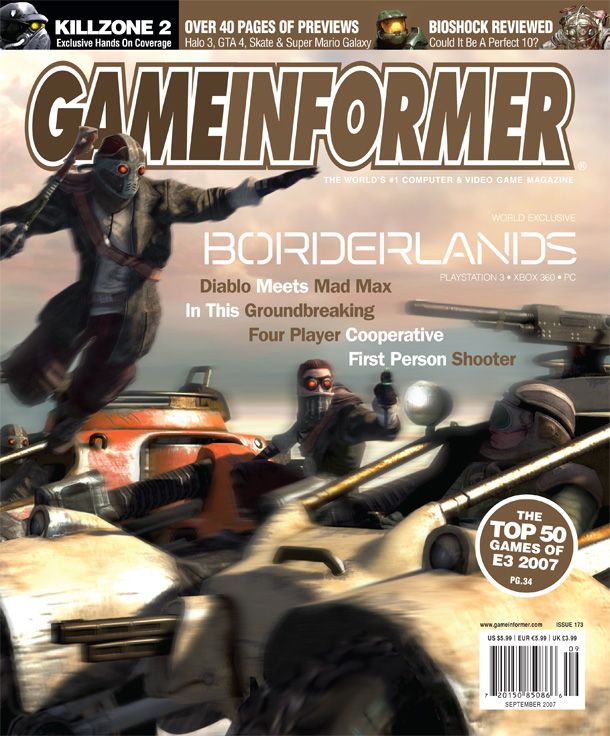 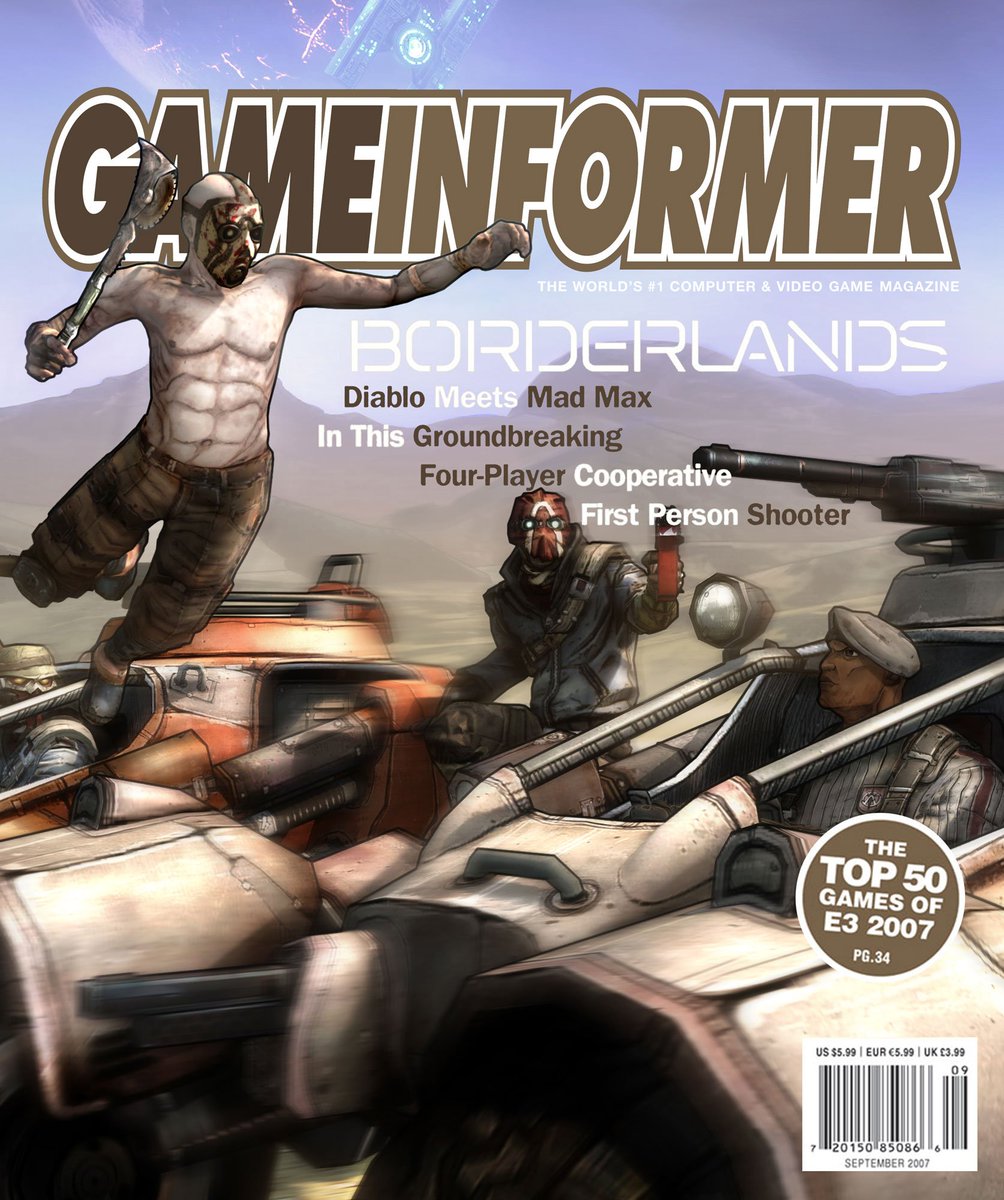 Agreed. I don’t mind the wait. With some other franchises, it’s like they’re afraid you’ll forget about them and they’d be right as their rushed to market offerings wind up being “meh…”. I’m replaying BL1 right now, having just as much fun as previous.

I do not approve remasters of complete masterpieces, but porting BL1 as it is without any “improvements” on new generation consoles will be very good, just so more people could play it.

I actually want remaster of BL2 with completed Mordecai’s original voice over
and supporting NPC Bloodwing in Tundra Express.

I have that somewhere in storage. ^ I loved the old stuff before the cell-shading. That decision did pay out in the end though for them as Borderlands is their most successful IP but you could only wonder if they went all realistic with it. I also love that Lilith was originally Steele. lol.

Bunch of features that were removed from the game, oh well… Thanks for interesting article.
I would eat raw skag meat to get an early Borderlands version, though…

Uh… People, I think I found a good place to eat raw meat.

Funny story, it’s happened just like with Borderlands, I waited this game so much before it’s released but then I missed the moment when it was actually released.
I’m talking about EVOLVE created by Turtle Rock Studios and published by 2K. It reminds me of early version of Borderlands a lot by its style, setting, story, designs, sci-fi content etc…
It’s about people who are hunting in teams of four on big super cute tamagotchis who in its turn can kill them all by oneself. Gameplay reminds of… like we were kids playing on abandoned homestead inspired by Aliens, Predators, Pitch Black and other sci-fi movies where alien cuties kill all the humans … I remember I liked to hide in thickets of raspberry… and jump from the rooftop of the old shed. I usually played as monster because i was afraid to poke someone’s eye with a plastic bullet, and though i was twice smaller than any hunter, i made curl up all the elder kids… good memories.
Well, the game produces almost same sort of fun:

but you don’t need to be afraid you can poke someone’s eye for real. Still, it’s pretty hardcore in cybersport sense, Hunters can win only by teamwork, and the Monster can divide and conquer only being savvy in stealth-action. There’s also no “rail story” but there’s a lot of qualitative sci-fi lore and setting in common is very good written and does not contradict and perfectly combines with Borderlands series (same way like Max Payne perfectly combines with GTA)

Humans colonized another alien planet (Shear) to drill, pollute, ravage and everything human colonists usually do, provoking reaction of the planet’s immune system called “the Monsters”. The Monsters in their part don’t want humans to interrupt them from feeding and breeding, so they kill all the humans. Apparently this happens a bit earlier, I mean not so far away from “civilized world” as Borderlands (and Starcraft 2) because some characters still remember they had ancestors from Earth.

there is a very cool randomization system, like in Borderlands loot is generated from the individual components, in Evolve it happen to Evacuation campaigns, which makes them highly re-playable as a multiplayer, co-op, and solo experience.

Also very cool that each character is really cool, i mean each one is interesting as a person and unique as set of gameplay mechanics and none of them is an ■■■■■■■ (though Abraham might be jokingly called so) and each have own cool stories which expand the setting awesomely and give to the players an opportunity to generate thematic lulz; they are badasses in best traditions of Third season of Exo-Squad. (Good to use as remedy after BL2)

There is even one Mordecai-style character (perhaps that’s why I pick him as my main Hunter), another freak who enjoys solitude and knows the planet better than anyone else. Has a nickname “Crow”, he’s a Retired Survey Agent (always thought up such occupation in headcanon for Early “Panda” Mordecai) Such people are sent alone on new planets where they learn the kinds of things satellites and robots couldn’t tell, taste local wildlife, study landscapes, make an expert assessment of the difficulties facing the person on particular planet, and when the job is done, eventually decide to stay on one planet to relax and enjoy retirement in peaceful solitude with nature… eventually crowded with monsters and human psychos.
Khovalyg uses long rifle that can trespass through monster’s armor, and he also has winged buddy named Gobi… who has tiny brain, unlike Bloodwing, which implies a different hierarchy; while Blood took Mordecai under the wing as her adopted younger brother, Gobi wears a stimulator which makes him think that Crow is his mum. Gobi just helps his mom to track the monster, can’t tear the monster on pieces like Bloodwing would do.
Crow hasn’t received problems with appetite, according to his comments on everything that moves.
And this hunter does not differ with eloquent speech like our favorite Mordecai. Khovalyg says short and simple sentences because afraids that naswar may drop out of his mouth. But he can also do funny bawling if the monster squeeze or burn him a bit.
(Independent qualitative character who reminds of favorite Mordecai is much better than horribly dubbed half-measure from BL2)
My being a slowpoke in joining this game is kinda canon for roleplaying this character because he joins the team later as dlc content.

on my taste Evolve is beautiful in all respects. However, I’ve seen a lot of reviews where sad people say that the process is boring and monotonous, well, I’d say that it actually can be “boring and monotonous” like a real hunt (or fishing, or picking mushrooms in a very beautiful forest) which is truly enjoyable process. It’s one of those games I’d like to play after decade, and after few decades… Huh, I can imagine myself playing with grandchildren in futuristic VR as Lennox the ThunderGranny ^ _ ^

But the publishers tend to do weird things, because old-school masterpieces of art tend to be commercially unprofitable, because things of such scale need lots of quality labor and time, and not so many people can percept them immediately after release, critics can give a good evaluation, but such things never “hyped” for mass audience.
excellent example: not so long ago I went on epic event – Villeneuve’s sequel to Blade Runner, it was one of only six shows available with the original sound in city with over 5million population (in my country films are usually shown with terrible dub, and originals are rare) but the hall was not completely filled, and I think I with my boyfriend were the only spectators younger than forty and not Japanese tourists… according to official reports, the film actually failed at the box office… a kind of quality mark.

2K hurried release of Evolve, savagely tearing it on lots of tiny DLCs which was pretty tiring for players who started to buy it by pieces from the beginning. But even though all the fetters and pressure around production of triple-A project, TRS managed to make the great one.
And now all DLC content for Evolve is available for free in completely completed version of the game - Legacy Evolve (like in update 6.66 for DOOM 2016, though DOOM wasn’t a victim of aggressive publishing policy and the original release was more like three big games at the price of one, and DLCs were just adding MOAR stuff for multiplayer)
but the next problem is now PC players can get only unfinished free trial cut nerfed sterilized version of Evolve(called Evolve Stage 2)
https://support.2k.com/hc/en-us/articles/221857488-What-s-Included-in-Evolve-Stage-2-
the last four points (Shared Dome,New Hunter Class Abilities, Map Redesigns, Game Modes) mean cutting off ~80% of the original game; turning multiplayer co-op aimed on tactical stealth-action on more than 15 unique highly detailed maps with multi-level architecture, complex lighting, water, interesting fauna, high bushes where even a monster can hide his ass and trappers with sci-fi jar which is so pleasant to unscrew with hands and throw to trap unsuspecting monster in mobile arena and where most of processes are indicated with sounds and animation… into online simulator of running decapitated chickens on emptied plains with annoying numbers sprinkling around heads, well, still providing lots of fun because of human factor; 20% is quite enough for free trial version meant to introduce the setting and lure more newbies (like F2P World of Warcraft until level 20, but technically, unlike Evolve, bought WoW stays the same game and doesn’t show different usage of engine), but then getting full version of Evolve called Legacy Evolve becomes problematic. I’ve used my scavenger skills to get for myself one retail box copy with key (paid ~5 dollars in rubles for treasure. perhaps was the last one in all warehouses of my city). Still need several for friends so they could unlock Legacy. Yup, sometimes publishers do weird things.

If someone don’t get why am I talking so enthusiastically about Evolve HERE:

ЗЫЖ
I checked for threads about Evolve on this forums; to discuss everything about only Evolve not in the context of Borderlands and not bother moderators we probably should go there
Evolve (added garbage b/c the title must be 15 long

1 Like
General thread about Immortal Steel Cojones, True Mordecai the Undying, Protector of Jimenez, Sworn Enemy of the Incubus! [In context of THE ENTIRE BORDERLANDS series]