[que intro music]
Ladies & Gentlemen!
Dancing in the left corner…
This general purpose unit manufactured by Hyperion;
-‘When you mean business, you mean Hyperion’-.
Standing at a height of 3 feet tall,
weighing in at less than a pile of Skag.
Holding a mixed programming of combat Action skills.
The current reigning ‘Interplanetary Ninja Assassin’ champion.
Fighting out of the hostile streets of Fyrestone, Pandora.
It’s your bro-bot… BR4W-LR! 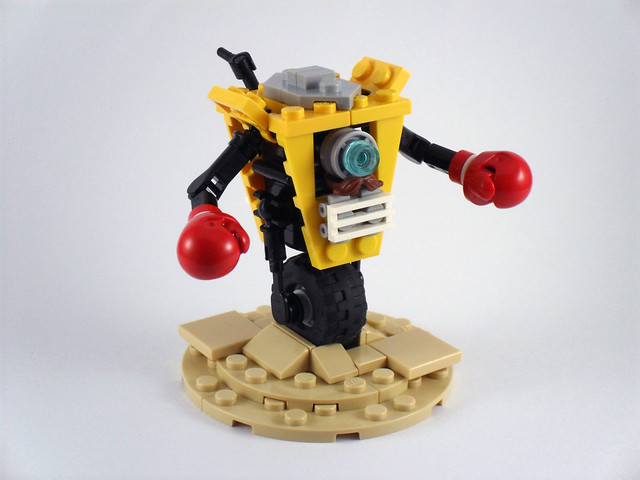 Hya, longtime Borderlands-fan here. I just felt like sharing my most recent Lego build in anticipation of Borderlands 3 called ‘BR4W-LR’. More angles can be found on my Flickr page.

A fun little build featuring; a moveable eye (can look around in all directions), turnable wheel (lean back & forth + twist sideways to a certain degree), moveable arms (detachable boxing gloves to facilitate regular hands/claws) and a modest baseplate to keep him upright.

P.S. You might have seen one of my older mini Lego Claptrap builds before.

Thanks for watching, _zenn.

This is amazing! Could you create a guide to rebuild it?

I’ll maybe create a set of instructions if there’s enough demand for it. But untill then, feel free to pm me if you have any questions.

You are a wonderful human being

I love your expressionism!!!