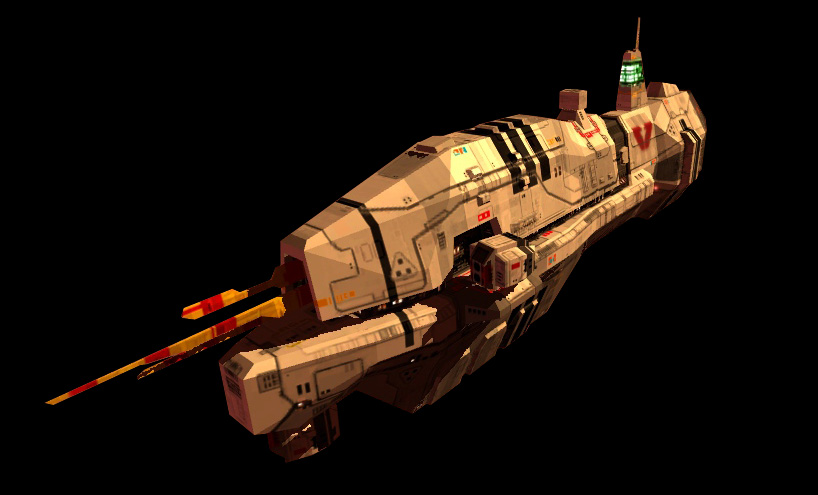 The Assault Frigate is the Vaygr counterpart to the Hiigaran Flak Frigate. Background It is armed with three double-barreled anti-fighter flechette cannons that fire conventional kinetic rounds and a single concussion missile battery. A single...


According to this description, the Vaygr assault frigate is actually supposed to be useful for anti-strike craft purposes.

Now I don’t think I’ve ever seen anyone actually use Vaygr assault frigates for this purpose, infact I struggle to remember them doing anything but being a soft counter to other frigates. I’m horribly unfamiliar with this unit.

I’m in dire need of a solid anti-fighter capital for the Vaygr and was even considering giving them flak frigates, but the description here changed my mind.
Does anyone have any good ideas on bringing this unit to equal standing with the Hiigaran Flak Frigate? Would I be able to do it plainly by increasing rate of fire? or adding a virtual turret so it is able to hit more targets simultaneously?
I get the feeling it would always be subpar due to lack of splash damage so perhaps changing the flechette shells into a small flak variant might be more appropriate?
It’ll typically be going up against 5+ squadrons at any given time and needs to be effective.

Any ideas would be good, more so if I can preserve the Assault frigates identity at the same time.

The sub weapons of the assault frigate on the other hand are fairly hefty, but are separated and can’t actually hit anything:
90x3 damage
{Fighter=.31},{Corvette=0.13}

It’s sort of misleading to say the Assault Frigate does splash damage - the thing you’re talking about is the extremely slow firing and extremely inaccurate missile launcher. The primary guns don’t splash and they’re also the guns that have the atrocious accuracy.

Bumping up the accuracy of the main guns would help give it more fighter punch and it would be a really simple mod if you want better assault frigates.

Well so far I’ve opted for something of the opposite; I found the launcher was so terribly slow that the strike craft had reached their objective before they did anything, so I extended the missile launcher to fire faster and hit targets quicker with an aoe similar to flak frigates (only slightly inferior).
The main guns now fire twice as quickly, but at half their previous damage. I had to actually lower the accuracy on these further because they were decimating HW1 race fighters like butter (at least in a group they were).

I had wanted to use the guns like you said, but they just didn’t scale very well for larger encounters. Too many assault frigates and everything is instantly dead, too few assault frigates and they achieve nothing (where as a single flak frigate can deal significant damage even when overwhelmed). AOE just had a more dramatic effect on higher numbers of SC when you have fewer frigates so I went with that.

Strangely enough, with all these changes, they still lose 1v1 against flak frigates, even though I almost doubled the rate of fire on the launcher. These frigates really seem in bad shape, it feels like relic had intended they be massed, but there are better things to use generally.

I’ll probably have to rebalance them again once the official balance mod hits, but for now I’m fairly happy with the result. I need to do more testing against corvettes however.

Instead of modding it, I would bring the sad state of the Assault Frigate to the HWRM devs attention. @scole?
Though it doesn’t have to match the Flak Frigate’s performance at all. Just be actually half decent at something.

It’s not related to official balance, but my own mod. I think it’s traditionally been a very terrible frigate though.

I’m aware, that’s why I said “instead of modding it”. But why shouldn’t it be related to the official balance, it seems like that’s what it should be related in the first place.

In HW1 the assault frigate was intended to counter corvettes and other frigates and it did a very good job. Fighters were never really its purpose. There were other counters for them. This is probably what you’re seeing here with the Hiigaran frigate. To change the stats may upset the game balance the way it was intended to be. That’s not assuming a different MOD purpose. Not saying it’s bad, just saying its purpose.

My mod aside (not a balance mod for sure), I don’t think it would hurt for the Vaygr Assault Frigate to get a new coat of paint. Any HW2 vets willing to chime in how anyone can use these things successfully?

Relic either neutered it or never got around to giving it love-each turret is double barreled in appearance only as none of the turrets have a slave set up.

So could it get some slight buff in the official balance patch?

Do you think it may have been an oversight? Or was it intentional?

It’s a Jack of all Trades units. Those either suck or they are overpowered, because they can never be as good at any job as a specialized unit, and if they are they completely overshadow the specialists. Good Generalists also scale ridiculously well with numbers, which is very, very bad.

Generalists generally only find a viable place in a game where there are more unit types than just “small ships” and “big ships” and the side that has a generalist is usually missing a specialist that covers at least one area. See Relics later RTS games for examples of that (eg.: DoW’s Space Marines have a generalist starting unit with a slight ranged focus, but are lacking an early melee specialist so the generalists have to take melee duty in a pinch).

Vaygr Assault Frigate -Jack of all trades? Is it? Let’s suppose it’s true (I really dissagree), it’s not a very Vaygr philosophy then, make it an anti-strikecraft specialist instead. Make it good at that and not much else.
I know Hiigaran = omnidirectional defenders / Vaygr = highly specialized attackers sounds like a cliche by this point, but there’s some truth to it (Lance Fighter, Vaygr BC…). Make it a specialized unit (it you think it’s not already).

Both Hiigarans and Vaygr are almost entirely specialist units. The real difference between them is where they put more of them (Vaygr have specialists for every role in Strikecraft, Hiigarans have specialists for every role in Frigates). Ion Frigates, Flak Frigates, Heavy Missile Frigates, Torpedo Frigates (and these are veering into generalist territory and are inferior to either of the specialists at both anti-capital and anti-strikecraft work), Pulsars, Gunships, these are all specialists, just like Lances, Laser Corvettes, Missile Corvettes (these are pulling double duty currently because their bugs, but in their natural state they are really straight up corvette killer specialists that are bad at other jobs).

And of course fighters and bombers are specialists too that both sides have access too. All of these units are fantastic at one thing and terrible to - at best- mediocre at one other thing. Homeworld 2 is a game built on extremely hard counters and that hurts the units without a clear target.

You could make the Vaygr Assault Frigate good at killing fighters and make them worse at everything else, but then you’re just sacrificing what little factional diversity there is on the altar of balance. Vaygr don’t have an equivalent to the Flak Frigate - and that’s ok. I’d say your time would be better spent finding something interesting for the Assault Frigate to do that isn’t “a Vaygr flak frigate”.

You could make the Vaygr Assault Frigate good at killing fighters and make them worse at everything else, but then you’re just sacrificing what little factional diversity there is on the altar of balance.

Well then make them better at killing Corvettes, but make them decent at somehing. The whole basis of current diversity lies in the fact that Vaygr don’t have the reason to build the unit in the first place, while Hiigarans do have a reason. Diverse.

But OK, generalist, it can be that. If it felt a little more like the Classic HW1 Assault Frigate, I’d be happy.

It feels quite a lot like the Classic HW1 Assault Frigate already - that one was also terrible and inferior to every alternative.

You could crank up the speed and make it outrun other frigates by a significant margin, so it could be used for raids on isolated carriers or resource collectors, but that would be really hard to balance since nothing bigger than strikecraft have that role so there’s no telling how the rest of the balance would hold up.

You could crank up the speed and make it outrun other frigates by a significant margin, so it could be used for raids on isolated carriers or resource collectors, but that would be really hard to balance since nothing bigger than strikecraft have that role so there’s no telling how the rest of the balance would hold up.

I had thought about this, but it is of no benefit to the AI…

Let me ask you just one question: do you ever build the thing?

It’s not even a starting Frigate, HMF is. This is an unlock unit…
If you had it from the start, maybe I could see it. Then it might actually sometimes even appear on the battlefield…

No one sane of mind builds this beater I suspect, Pouk.

Hell no, why would I ever build that crappy unit? Nobody should be building it - it’s terrible. And that’s with the AoE damage bug that makes it perform better than it is “supposed” to.