Borderlands Roland the Soldier
VaultHunter101 (Flying: throwing yourself at the ground and missing) March 30, 2019, 2:40pm #1

OK, up to level 63 with Roland and I’ve not been entirely consistent with my build. Here is the wobbly unfocussed mess: 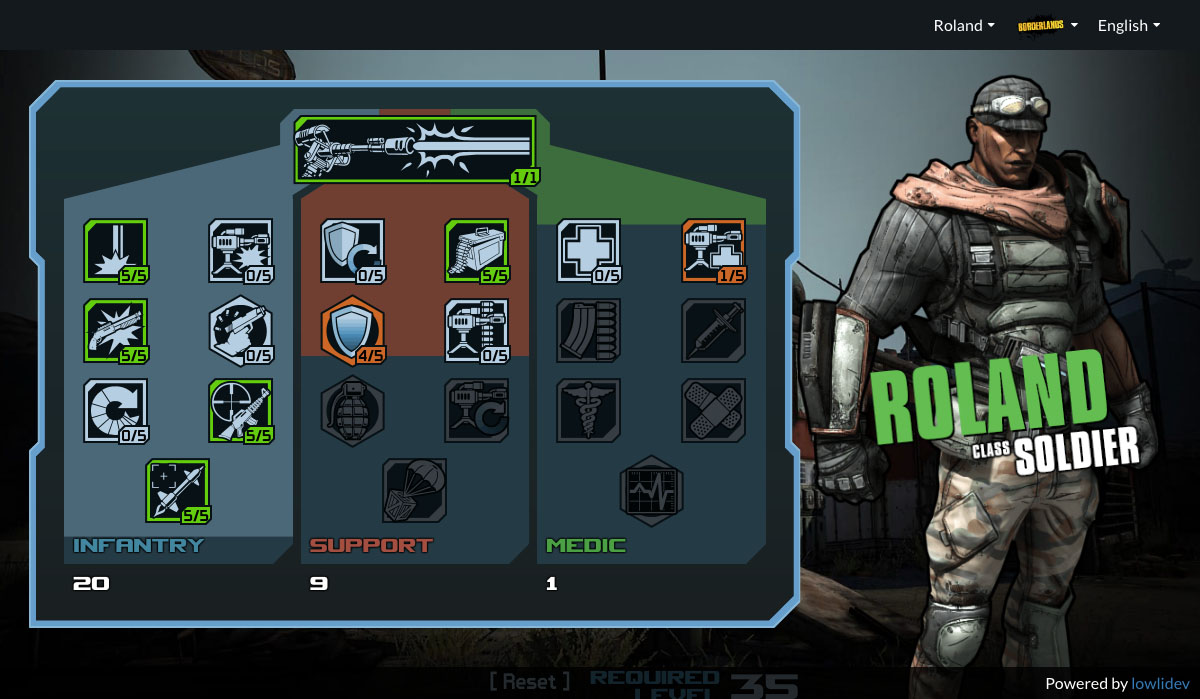 Suggestions? I’d like to get more out of my turret. I’m currently running a Support Gunner Class Mod, so I don’t need the ammo resupply quite as much. I also have a collection of other COMs in the bank (Tactician, Rifleman, Commando, Shock Trooper).

I would put less points in the scorpio damage/extra burst fire skills. You do way more damage then the turrent. Instead more points in the cool down when shooting/and or damage for yourself. Just an opinion.

The turrent is a great way to keep agro off you in fire fights, not a solid source of DPS at higher levels though.

I also learned the hard way that it’s a bad choice to throw in front of a Tankenstein, since they can heal off it quite nicely…

Was your turret loaded with shock? Special zombies heal off shock damage.

When you throw down Scorpio, do you tend to fight from behind it, or range away from it and try to flank?

I’d suggest moving the points you have in Stockpile and Aid Station into Supply Drop and Stat. Supply Drop 5/5 is more than enough for solo play, and it’s MUCH more potent than Stockpile. Aid Station is much better in that you’re not locked down in one area for it to take effect.
Having so much ammo from Supply Drop can tie into Refire, and Metal Storm is simply overpowering, I’d suggest those two.

I’m not a big fan of Support Gunner late-game. Most toons have enough ammo regen to take care of themselves, especially Roland. I’d say throw one point in Aid Station and go Tactician, or load up on Scattershot and blast things with Commando. I think stouty has more Shock Trooper experience than I do, he might have pointers on that.

If I was going to do a solo play Scorpion build it’d look something like this.

There a couple thing’s I’m missing out on that I’d usually go for, namely Scattershot and Grenadier. 3/5 is usually enough to keep you supplied unless you’re going something like Heavy Gunner.
The wikia has a useful chart on Guided Missile if you choose to spec into that.

I’ll take a look at the rest later; right now I have a Psycho to finish BL2 story with.

Roland, as a character, is best off focusing on himself up to level 50. Impact, Metal Storm, Fitness, Overload, Grit, Stat, Defense, and Quick Charge combine for a great overall buff for him and it is difficult to justify not maxing those skills out at 5/5.

Between Assault (Assault Rifles) and Scattershot (Shotguns), the latter is by far the better of the two and is simply an outstanding skill. However, that comes down to what you prefer and people that run Heavy Gunner might opt to select neither weapon class. In general, as Roland, you are almost always best off running a very offense-orientated class mod because the Scorpio Turret provides good defense.

Once you have all of the Roland-first skills, I recommend making sure the turret is available as much as possible. Having both Deploy and Refire at 5/5 might seem redundant, but it is not and goes a very long way in keeping Roland on his feet more as enemies will be more consistently distracted.

After that it becomes personal preference. I usually max out Barrage and Sentry and place one point in Guided Missile, Supply Drop, and Grenadier. All three of those skills provide good returns with just one point, with the first two not improving as much at 5/5 as you would hope. This approach tries to squeeze as much out of the turret as possible after Roland has been maxed out.

This would be an endgame Commando Roland.

However, if you do not like Shotguns, then you could shift the points elsewhere. I think Aid Station and Stockpile are extremely underwhelming. The former makes you camp out near the turret, thereby losing all of your tactical flexibility and Stockpile loses to a single point in Supply Drop on top of once again losing all of your tactical flexibility.

Also, remember that the turret can debuff most enemies by applying corrosive damage over time! This makes Roland better in a similar way to Axton’s Double Up!