Homeworld Cataclysm devs: Martin Cirulis and Chris Stewart said they can remaster their game easy and in a small amount of time, even without the source code. All they need is gearbox interest. Please GBX, remaster Cataclysm !

Rather old news there chief,

Saved Twitch broadcast It’s long, but interesting podcast with Cataclysm devs. They talk about production of that game and discuss remaster/recreation possibilities. First hour is about Cataclysm, they start playing Treasure Planet after that.

but it would be nice to see it happen.

My goal is to show the exact moment when they say : “We can remaster it”, and not just to share this video

I hope if they do, they do it right. Yes. Blackbird did Homeworld (1) “Remastered” wrong.

However. This is unlikely.

Edit:While many would take issue with how wrong Homeworld (1) “Remastered” was, most will agree it could have been done better. I do not wish the same fate upon Cataclysm.

Yeah I don’t think I would want it unless it was in a correct engine.

Yeah, I also don’t want to see Cataclysm being remastered right now. The classic version is pretty good and doesn’t need much of an overhaul, if only better support for newer OS.

I think they should build a new engine and use it to remaster Cataclysm and re remaster Homeworld.
Not necessarily in that order!!

The is quite old news, and also utter non-sense. I won’t even attempt to detail why - virtually anyone with game dev experience understands this to be hyperbole and nothing more.

I hope if they do, they do it right. Yes. Blackbird did Homeworld (1) “Remastered” wrong.

However. This is unlikely.

Edit:While many would take issue with how wrong Homeworld (1) “Remastered” was, most will agree it could have been done better. I do not wish the same fate upon Cataclysm.

You are incorrect, Blackbird did not do it wrong, Gear Box did, you need to figure out who the various developers are dude.

I got the impression that they thought Remastered was done by re-creating Homeworld 1 & 2 in a modern, modular engine, like Unity or UE4, in which case it’s kind of understandable that they would think it wouldn’t be too much more work to build on that foundation to do Cataclysm as well. Had they realized it was a retro-fitted Homeworld 2 engine, I think they’d have acknowledged that getting Cataclysm going in it would be a fair bit more complex and time consuming.

i do believe HW shipbreakers was being developed using unity. but i don’t think the cata devs were implying that they would use the hw2 engine engine at all. they were just saying that having the source code is not a prerequisite for doing a cata remastered, and if gearbox reached out to them, they would be interested.

@bitvenom, as a game dev myself, i call bs on that statement. feb 19th is hardly quite old, considering hwr was released on the 25th. as for being non-sense and hyperbole, i find that hard to believe coming from 2 very established, veteran developers with multiple titles under their belts. just my opinion though.

Nope. Hyperbole. Game dev or not, we just did a remaster - there is nobody more qualified to weigh in on the difficulty of the task. I think it’s more that they would love to try it, not so much that it wouldn’t be hard or expensive or time consuming.

Using the existing engine would be crazy because Cata was on top of HW1, which we didn’t really touch - so all sorts of stuff would have to be rebuilt, recreated, etc. Doing it on top of Remastered would be easier - but have issues with the ‘HW1’ stuff - Strikegroups instead of large group formations, etc. Art-wise, now that we’ve created the systems and it is all mostly defined (which was far from the case during dev), they’d have a much less difficult time. It is though still a TON of new artwork.

As for using a new engine - that’s no better. Tons of work to rebuild the old game logic systems - some of which are far, far more complex than you might imagine - tons of work to create new assets from the old ones - techniques and configuration of that art has changed or would create new problems to solve, etc.

There is ZERO chance the final product would be successful or functional and on any fair budget and still be called ‘easy and quick’ - zero. Period.

I’ve been making games for 20 years, have tons of shipped titles on almost every platform in existence, and I call it Hyperbole.

As for using a new engine - that’s no better. Tons of work to rebuild the old game logic systems - some of which are far, far more complex than you might imagine

believe me, i know exactly what is involved in trying to rebuild cataclysm in a new engine

, it is not easy… but not impossible.

OP was talking about easy. And that’s the whole idea - I believe Dave’s position is that there’s not enough profit in remastering the game as it would possibly cost more than sell. It’s too much risk, if I understood properly.

So “getting Gearbox attention” is not as small thing as it sounds, as it’s a decision the whole studio will have to pay unless it’s a huge success.

I’ll be controversial, hate me if you will for what I’m about to say, but I don’t miss Cata at all.

Gameplay-wise it did some very interesting things. Modular Mothership, these shield Drones and Leeches etc.
But it didn’t have too many units. The Corvettes were just two conjoined twins fighters (what the hell?) and there were some very oddly imbalanced things as Siege Cannon, Super Acolytes, Nomand Moon, Naggarok. And by imbalanced I mean literaly comic book over the top impossibly powerful. Cringeworthy imbalanced.
And a Ramming Frigate? Well, that was a thing…

Visual aesthetics-wise it was bad and sort of amaterurish (this is the part of the criticism I was warning about in the beginning).
The ships didn’t look like they had a clearly defined shapes, they looked rather like random blobs made by starting modders. A bit naive. And the wide proportions in all dimensions didn’t leave much space for a sense of scale. Everything was just too damn bulky. It had proportions of toys.

Is this a good design? 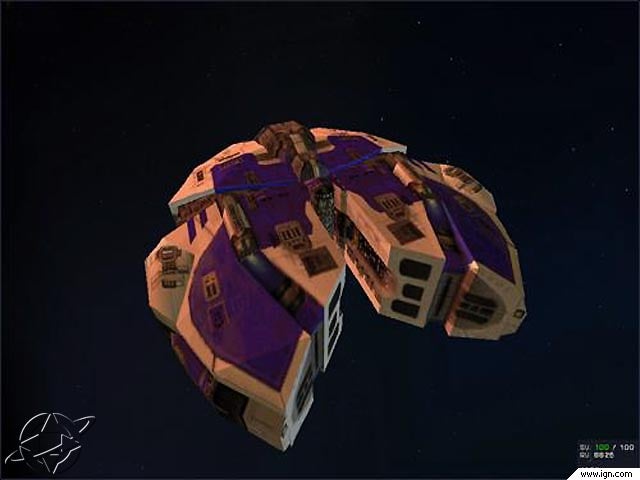 Does this look mature and professional to anyone in the world?:

And just what in the bloody hell is that? Seriously? Are we all looking at this thing saying “yep, that’s legit. Top notch art, a piece of history”, just nodding in admiration with a straight face?

And to close it off, take a look at the Somtaaw badge and honestly tell me it isn’t the cheesiest thing:

The game had a good music. I did like the thing with Bentusi, that surprised me, that was a chilling moment, I’ll grand them that. But other than that, I don’t miss it. And I didn’t find it very professional, it was a level or two below the rest of the Homeworld games. A power fantasy with naive aesthetics, as if it was created by an immature imagination.

-A plot for an 80’s cartoon. A flesheating virus with stolen voices that you fight with ramming frigates (because that’s obviously the safest approach), with a superultra Yamato siege cannon and with fighters that join together morfing into Acolytezord. In the middle of that there’s a Death Star superweapon going bad. And you fight this all with colorful toy-like ships.

I’m sorry if I stepped on someones sacred memories, I really am. But it really wasn’t as good as you remember it.

@Pouk I’m currently playing the game and I love it. And I actually enjoyed it more so than HW1, because it added a lot of neat features that should have been in HW1 Classic, although HW1 Classic is still an epic game and both are miles better than HW2. The story was focused on a kiith, so things were supposed to be scaled down and kept small (the smaller fleets made the game harder on the higher difficulties).

My only criticism of Cataclysm is that it’s very easy to get a high count of resources early on: by the latter 5-6 missions, you won’t need to harvest again.

I would avoid suggesting that we’re all remembering the game wrong, because it’s a false statement only based on your own opinion of the game, rather than that of the majority.

I would avoid suggesting that we’re all remembering the game wrong, because it’s a false statement only based on your own opinion of the game, rather than that of the majority.

Well it’s not a false statement only because you say it is. You actually do the exact same thing with that.
You literally said, my statement is false, because it’s my oppinion.
By the same token, why couldn’t then I say that your stetement that my statement is false is false, because it’s your oppinion?
By your logic everything everyone ever said would be false.
The difference between what I said and what you said is that I actually made a case and explained in detail why I’m holding that possition.

And how about keeping the story small? Cata wen’t crazy. There’s nothing small about a demonic superorganism with a Death Star mixed somewhere in the plot.

Often you need to remove some portions of your collective body of work in order to elevate it. To get rid of the weaker links to make the product better for it. And Cataclysm was a weaker link, it was very immature and I do say the Homeworld is better without it than with it.

Feel free to counter my points one by one.

This topic again? I guess I’ll just link my old post on the subject: http://oldforums.gearboxsoftware.com/showthread.php?p=4713076#post4713076

TL;DR, I think Cata is a net positive to the setting and a lot of fun. If the positives outweigh the negatives is an entirely subjective judgement and can’t really be proven either way.