I find the combination of these two things to be incredibly perplexing. CC Duration gear is intended to be anti-CC gear. In a CC heavy meta, it should be basically required since it’s intended to be the counter to enemy CC.

Of course, I only find it perplexing in the abstract. In actual play, CC Duration gear is worthless because it doesn’t actually help with CC effects in any appreciable way. The most significant CC effects last 1-3 seconds (stuns, blinds) and no one is going to notice a fraction of a second reduction in the duration of time that they’re stunned (14% CC Duration reduces a 2 second stun to a 1.72 sec stun, which is well below the threshold of perception for people), not to mention the fact that, a lot of the time, the advantage of a CC effect happens in an instant: it breaks the target’s flow and interrupts skills. Even if it lasted .1 second, it would still do these things and be extremely useful (there’s also a psychological advantage in a target being pissed at not being able to control their character for a period of time; losing control, even for a little while, is extremely aggravating to competitive personalities).

The solution, in my mind, is pretty simple: change CC Duration into CC Resistance.

To explain a bit, what I mean is to completely change CC Duration so that, instead of reducing the duration, it instead gives you a chance to completely ignore CC. Instead of a 14% CC Duration gear reducing the duration of all stuns, blinds, slows, (and wounds, I think?), etc. by 14% so that you don’t even notice and still get affected no matter what, 14% CC Resistance would provide you with a 14% chance to completely ignore the CC effect in question: you’d still take damage, but you simply wouldn’t be stunned, blinded, slowed, etc. I would also make it apply to forced movement effects, like pushes, pulls, knock up effects, etc.

It would definitely require some tweaking of the back end (especially since they would need to make the CC gear additive rather than multiplicative) and would definitely require some changing of the numbers (which is kind of necessary anyways), but I can see it significantly helping to mollify the extremes of the CC meta while still allowing CC to be relevant (especially when combined with draft mode, so that you can actually see if your opponents are putting together a CC team).

As for Pendles, if they want to eliminate CC Duration altogether and just make it CC Resistance, they would probably need to dramatically reduce the values on his passive and helix, but it would still work (and make those significantly more important and valuable). If they leave his as CC Duration while changing the gear to Resistance, it would probably be fine.

If possible, I would make it so that “resisting” a CC effect also counts as “recovering from CC” for the purpose of gear, which would make the CC Duration legendaries much more appealing: get hit by CC, resist it and get a buff in the process. I’d also want to change Hate Reflector so that it reflects the CC back at the user any time you resist rather than having a flat chance when affected.

I am all for a change that would allow certain gear to be worn that never gets worn.

Also this would give a player a chance to out gear or play a new style due to gear, thus pushing forward flavors of the week…

I like this idea. Although I would really like to see them just up it to 50% (and 25% secondary) and see what the data says. So it turns a 2-second stun into a 1-second stun or slow. For a pull, like Gali, Ghalt, and S&A it just pulls half the distance and same thing with the Boldur’s and Montana’s dash push you half the distance. Something like that and see how that effects the meta.

Edit, if you put a solid blue on Pendles, like this one, he will be over 100% while cloaked. It would make him WAY more viable in competitive matches, even with characters that have reveals. 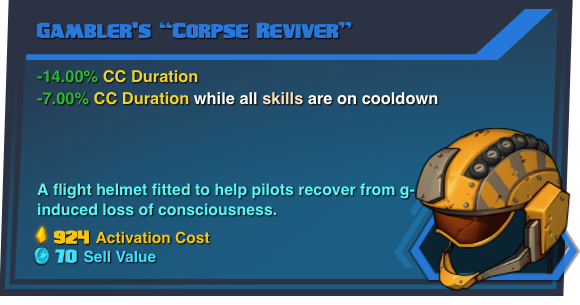 [quote=“vegancookies5, post:3, topic:1553447, full:true”]Edit, if you put a solid blue on Pendles, like this one, he will be over 100% while cloaked. It would make him WAY more viable in competitive matches, even with characters that have reveals.
[/quote]

Massive values like that don’t really solve the problem though. Sure, you’re reducing 2 sec stuns to 1 sec, but they’ll still interrupt skills and stop players in the middle of doing stuff. A binary resistance system (where you either get the full CC effect or none of it) is easier to balance (since you have 2 states rather than a whole spread to consider) while being much easier to notice (when you get hit by Gal’s shield and don’t get stunned, you will notice it a lot; tests have shown that it’s much more satisfying to have an all-or-nothing rather than gradual reductions when you’re dealing with short term effects like this).

While I actually think this is a great idea, I also think it’s totally not. There’s famously two things the community despises. You said the first yourself

No one likes to have something suddenly not work. That delegitmizes their experience and makes them feel as if they accomplished nothing. Absolutely terrible

And no one likes RNG. Especially in a competitive game where even Spinning to Win was a static accomplishment and Phoebe rigs her taunts so she doesn’t have to get anything but triple shards

I really like this idea and wouldn’t mind this change at all.

No one likes to have something suddenly not work. That delegitmizes their experience and makes them feel as if they accomplished nothing. Absolutely terrible

The thing is, if this did go into play, you would still have control over your character. Yes, you still damaged your enemy with said skill but with the resistance gear they wouldn’t get the CC portion of it. Remember, if they geared up for CC resistance then they are missing out from other stats plus I’m sure this will make the AOE CCs more useful since I highly doubt you can constantly resist that unless you have 100% resistance

i like this idea. its great because its not like people are only ccing once a match. both sides have a chance for rng to take their side (if the victim even gets the gear up and running after picking a loadout with it) and most ccs have short enough cooldowns, barring ults like deande’s, so that it would still allow for game changing plays.

it also has the bonus of tempering the cc user, as they cant just barge in with it, they need to consider an out if the victim gets immunity, otherwise, they could die.

This nearly sells me on it

The only thing that I am worried about is as a Deande main, getting a well-placed ult nullified.

I dont want rng… I dont want to play a la Joey wheeler, that will make me go salty. When my enemy out skill me i feel good and try to improve but if they win because my stun didn’t work but his did ill get rly mad.

Yeah this is what I was talking about haha

Instead of resistance to CC which I think is way too powerful a buff for CC gear and opens up competitive play to the whims of RNG, I’d rather CC gear apply severe diminishing returns on subsequent CC attempts after the first successful CC is applied (with some sort of internal cooldown).

One might even say he’d have some “brooklyn raaaage”

The solution, in my mind, is pretty simple: change CC Duration into CC Resistance.

Almost what I thought. Here follows my solution:

Change CC duration into Damage reduction during 5s after being CCed.

Example: Galileia toss her shield at your face. For the next 2s plus + 3 seconds after the stun you receive 25% less damage. (or any amount of time, really)

If she silences you right after the stun the DR reset its timing (its not cumulative DR).

I prefer DR over CC resistance because RNG can make people really salty. How would you feel after being CCed to death twice completely packed with CC resistance gear.

25% its not too much considering it won’t be up all the time. Plain DR gear will still have its spot even against CC heavy team. Its gonna be situational or difficult to choose between 9% DR all the time vs 25% for a bunch of seconds during a entire match.

TBH, that would make slows, the most common type of CC in the game useless, and even counter intuitive. Just think about taking out a tier three thumper at level 1 with a 0 cost CC item. You would take so little damage it would be comical. I just think they should up the percentages and see how the meta changes before they do something totally crazy.

Disagree because It can be bypassed by setting the DR duration to 2.5s or just by considering Slow not a “Hard CC” therefore not enough to proc the DR from CC gear.

Agree because it certainly would required unnecessary programming time, since there are other (better, simpler) solutions to the problem.

I agree that CC reduction gear is worthless, but I don’t like mechanics that are based on random chance. It’s one thing for some oranges to have aux effects that are chance based, but something as common as anti CC gear will either have so low a chance that it’s still not worth taking, or high enough chance that in actual competitive games it would make or break pushes based on RNG instead of skill.

They should just get rid of CC gear and that’s it.

And if they did that 50%/25% CC gear or smth similar… I really wouldn’t want to play in that environment where you will gonna start pick helixes based on the opponents gear loadout and not their battleborns pros/cons.

What worries me is that Mellka’s venom is classed as a CC by the game right now, and accordingly it is affected by CC reduction (including Pendles’ passive.)

If they ever decide to add diminishing returns or - as you suggest - CC resistance, it’s going to be the heaviest nerf she’s ever experienced. And she’s had a few. Even if CC resistance was 25%, as people are suggesting, that means her venom would do nothing a quarter of the time.