Apparently Sentrys are Vulnerable to pokes, characters are finding ways to peak out of corners and slowly deplete the shield of the Sentrs. This can be very frustrating when the game is nearing the end and the opposing team simply brings our sentry down to 99 or 49 and the entire match is lost. Anyone else feels this way?

poking the sentry is the whole goal of this mode. you can do the same.

shields were patched to reload only after 12 seconds or more without damage taken. So either use this and prevent any damage or pressure their sentry…

I have nothing against poking but I don’t think it’s fair that Marquis can snipe your sentry from the other side of the map.

In fairness, EVERYBODY knows this by now. If the opposing team has a Marquis then you’re just going to have to try to keep them harassed. Adds a new tactic. And I think a lot of people don’t want to be branded cheap or cheats by picking him so I’m seeing a lot less of him in incursion matches. I don’t honestly see what GBX could do to change the way it’s set up. The sniper snipes unfortunately

While I do get annoyed by Marquis abusing this, I’m kinda fine with him doing it because it means he won’t be poking the teammates in the middle of the lane instead.

If they want to keep it in, they can just make it so that the Sentry starts with a “Damage reduction from players as long as the shield is active” bonus that gets reduced over time so it becomes possible to 5-man rush it near the end of the game while still allowing poking but much weaker if you abuse it from the start.

Something like, 75% damage reduction and going down by 5% every minutes so after 15 minutes, both side should start going all out already or lose if you let Marquis continue to abuse the poking.

I poke the sentry… with an ult ISIC.

there’s a counter to everything

i lost games with such a marquis on team

i won games without such a marquis on my team

and since you already found the other thread, why open up a new one?

I open this thread up because I see significance to it. Yes, there is one about Marquis but that’s only Marquis. We’re talking about characters poking the sentry in general and winning the game because of it.

I’ve seen just as much of this from Caldarius and Shayne, Caldarius usually creeps up a stairway and Shayne will use the side tunnels on Overgrowth to boomerang constantly. Yes people eventually react to it but they can both get away really fast then return if we focus elsewhere. The tunnel is a bigger problem for me simply because I’m usually Attikus and going in there is often a death sentence (too big to run away if they ambush me, one person can get behind and I’m trapped).

Attacking the sentry from complete safety is not OK, end of. You are delusional if you think otherwise.

Playing peekaboo with the sentry is fine however because you are always at risk of retaliation. Do the same to them once you gain control of mid. 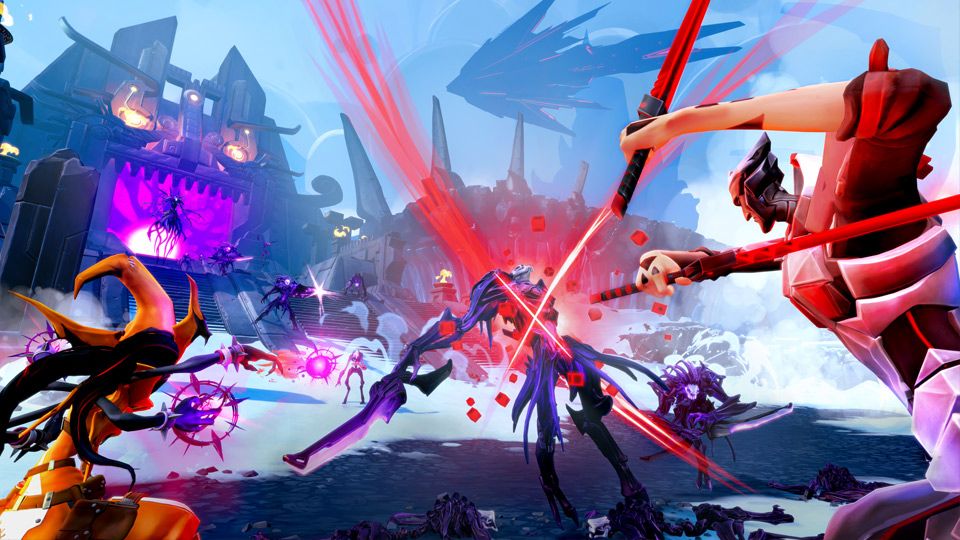 Battleborn launched yesterday – and already we’re updating the game based on YOUR feedback!

If you read the bottom part they say the first major update is going to look at fixing Marquis poking the sentry, so I assume they will probably make slight height adjustments on the map to make his super long range shots impossible. Whether that also fixes it for other characters I don’t know but the good news is they are already at work.

This thread is my main issue with incursion as a game mode. The balance between player damage, minion damage, and ease with which you can take cheapshots to the sentry regardless of shield or no shield is just non existent. Minions are too squishy first of all, a competent team can wipe the standard wave plus an elite bot in under 3 seconds. Thralls can help but again against skilled players three thralls can be wiped in under 10 seconds with good team synergy. This leaves you with the only other valid option, taking out the sentry with potshots from ranged classes and circle strafing the sentry if you are melee(the sentry will deal 0 damage to anyone if this is done properly).

This, to me, is not fun. Pushing the lane feels like a chore and most people ignore it to team death match, because that is literally the only way to win: kill a couple opponents so they can’t stop you from DPSing their sentry.