Presumably, this is already in the works.

…it’s a good possibility, and would includes optimzation to quickly build a weapon for any of the 5 basic stats: 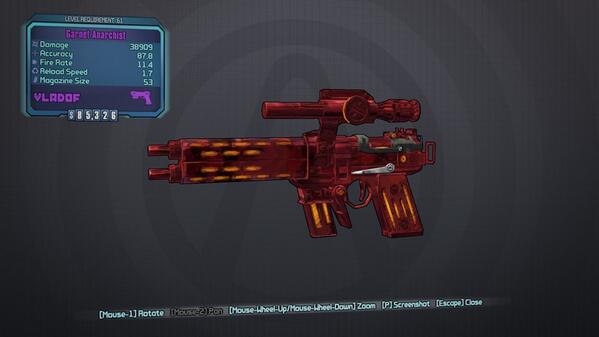 Ammo would be obtainable from defeated enemies or digistructed ammo box stations (like those found in the Torgue arena and Pyro Pete’s pit). If from the ammo boxes, ammo would be generated with grenades (x2) and ammo (x6) for whatever weapons you currently have equipped, prioritized by the order of what you’re lowest on.

I can get behind this as long as dots are not super OP and health gate is still a thing in pvp.

Look interesting. A bit more complex than in previous installments, but is awesome. As I understand, consoles are kinda priority platforms for development. So if these mechanics won’t work on consoles, they won’t reach, us, PC players. But, I hope for the best :-).

If they do include a competitive multi player option in BL3 I sincerely hope it has nothing to do with the pve side of the game.
Two other games I play, Defiance and Destiny have had rewards requiring pvp participation which is a total turn off for me.
The only reasons for adding it that I can see is to attract players who like pvp but want something a little different and adding participation required by the pve player is only to give the pro pvp players someone to kill.
Battle born has a pvp aspect so let them go play that.

@Piemanlee That would be entirely up to Gearbox.

@KauluMaisas TBH, I kinda threw this together after having tried Battleborn and finding it…for lack of a better word, chaotic with all the VFX onscreen. What I proposed here is something that breaks it down to near-“Call of Duty” simple while (hopefully) still keeping it as “Borderlands” as possible.

Heard PvE tossed around a bit recently; having never heard it before, I had to look it up: https://en.wikipedia.org/wiki/Player_Versus_Environment
So as I understand it, basically standard “Borderlands”, huh?

I was kinda thinking PVP, but now that it’s been brought up, what about something like “Battleborn” where PvP and PvE are mixed, and one or the other grants more points depending on a sub-mode/setting?

Oh I can’t emphasis this enough “no way” do I personally want anything to do with pvp.

They are two different game styles and have no business being together.

I’d enjoy it if it was very balanced. Like with +/- 3 lvls and I think gear from your single player story should be what you used in pvp. But there should be NO pve content that requires you to do pvp.

@Bentu/@Piemanlee Pretty sure it was “Resident Evil 5” or “Resident Evil 6” where there was a mode that mixed PvE and PvP, which gave a bit of competition. What I was aiming to do with the “Battleborn”-esque draw-up was mix the two, but orient it via scoring towards one or the other. In this way…:

[quote=“Piemanlee, post:9, topic:1363580”]I’d enjoy it if it was very balanced. Like with +/- 3 lvls and I think gear from your single player story should be what you used in pvp.[/quote]The core of it is basically no red-text gear, which IMO is about as balanced as you can get.
Of course, there’s also the shield combinations and Gunsmithing to make things more interesting.

[quote=“Piemanlee, post:9, topic:1363580”]But there should be NO pve content that requires you to do pvp.[/quote]The point of it is that you can, but you don’t have to.

I don’t think you’re understanding me, no pvp at all.
Go play something else for your pvp kicks but don’t drag Borderlands down that route.

Destiny is pretty much your concept. It’s about 50/50 pve/pvp. Gear is balanced in pvp. Action skills are still active in pvp but they are quite balanced.

I agree with bentu. There’s plenty of pvp on offer these days but pve is by no means dead. Fallout 4 is hugely successful and is not only pure pve, it’s entirely offline

With no action skill, passive abilities and no red text gear would make it NOT Borderlands. Add in gun smithing and you are now playing a completely different game with borderlands characters. If PVP in Borderlands becomes a big part, I may not want to play it anymore.

@one1oh0one1 Haven’t seen “Destiny”, and TBH, I thought it was strictly PvP. Also, how exactly are you reading this? Because the way I wrote it up is with three things in mind…:

…with the idea of a PvP-capable battle system where the playing field is completely level, almost like “Call of Duty: Modern Warfare 2”. (Say what you will, that’s the last one I can recall with a level PF.)

@Bentu You’re entitled to your opinion about PvP, but…:


And all due respect, but you seem to not realize that this idea was an eventuality, whether it stayed on paper or got off the drawing board – point is, somebody would’ve dropped it sooner or later. Frankly, if I had wanted PvP so much, I’d’ve not even considered/figured PvE into the concept at all.

@Master_Beef You would know more than me, sir. That said, while it is true that a lot of current titles offer PvP, the gear they present is pretty normal by comparison, correct?
As for player-versus-anything, neither did I say that PvE was dead, nor that it was gonna be strictly online.
And regarding “Destiny”, I heard it was exclusively PvP. Which was the one reason I didn’t want to play it.

Before anyone starts pointing out that what I wrote up goes against my preferences, this was something that just happened, and IMO was better off expressed now than never. And the whole process snowballed -- the proposal was originall PvP-exclusive, but evolved to the point that it is not -exclusive, but -capable as a means of hindering the opponent(s)' ability to score.

@Nick_Infidel As for Gunsmithing and PvP in the way presented above, I don’t see them (respectively) as a completely different game and becoming a big part, just aspects of a different mode aimed for balancing and less visual chaos/clutter.
Additionally, I have underlined elsewhere/previously that Gunsmithing in regular “Borderlands” would simply not fit in. So we are on the same page for that at least.

[quote=“one1oh0one1, post:11, topic:1363580, full:true”]
This is a good idea but just don’t in any way link this with PvE like destiny unless the only thing you get out of PVP is just gun rewards not XP rewards cus that would make it unbalanced af for PVP pros[/quote]Not that it didn’t occur to me, but I wasn’t even thinking about XP at all. Gun rewards, tho, would be good, allowing better Gunsmithing customization.

[quote=“Raven_Ghosthawk, post:16, topic:1363580”]
You would know more than me, sir. That said, while it is true that a lot of current titles offer PvP, the gear they present is pretty normal by comparison, correct? [/quote]
I don’t know more than anyone! I do know a bit about Destiny, and I think it’s the game you’re looking for. There’s a huge range of gear, with special effects, in rarity tiers (white/green/blue/purple/orange - sound familiar?) and it has a massive PvE component.

And regarding “Destiny”, I heard it was exclusively PvP. Which was the one reason I didn’t want to play it.

Whoever told you it’s only PvP knows less than John Snow. It has PvP, and it’s fairly central to the game, but you can avoid it pretty much entirely if PvE is what you’re after. I’ve played maybe a dozen PvP matches in over 200 hours in Destiny.

Also, I realise you were not saying anything about PvE/offline being dead. Sorry about that

[quote=“Master_Beef, post:17, topic:1363580”]I don’t know more than anyone! I do know a bit about Destiny, and I think it’s the game you’re looking for. There’s a huge range of gear, with special effects, in rarity tiers (white/green/blue/purple/orange - sound familiar?) and it has a massive PvE component.[/quote]Correction – you know more than I do on the subject. As for what I proposed, I suppose it is a simpler version of “Destiny”.

As for the misinformation, thank you for pointing that out. Was told by a friend, so I didn’t exactly question him.</font color> Just looked it up, and you seem to be right about the massive PvE aspect: http://gamerant.com/destiny-pve-focus-update-patch-dungeons-dragons/
However, what I’ve drawn up is pretty much the basic requirements (IMO) for “Borderlands”, and is relatively easy to balance/process for even fresh players.

Also, I realise you were not saying anything about PvE/offline being dead. Sorry about that

I’d rather they just take some of the borderlands characters and revamp them for Battleborn. Screw continuity. I want to play meltdown as Maya, with kreig, Nisha, Lilith and claptrap as my team mates!

VERY late addendum to this – after having played “Destiny”, I’m finding the scaling can be pretty WTF compared to “Borderlands”.

In my opinion, Borderlands series should steer clear away from serious PvP. The casual duels we have now are fine. I would say they could create a spinoff game and have serious pvp there, but to me, that’s essentially Battleborn. So…

edit: more why i feel this way

Developer focus - I want the developers to focus on making Borderlands 3 a great borderlands PvE solo/coop game as usual. Unclear focus might make those aspects of the game suffer.

player focus - if you have too many game modes, the player population is spread too thin.

balancing - I don’t want to see patch notes updating a gun or skill because it was too powerful in PvP and then discover that the skill or gun is now bad in PvE. The only mitigation here is to separate balancing of PvE from PvP (so that they would only adjust something in the gamemode where it’s unbalanced, leaving it’s functionality in other gamemodes unchanged).