See that holster that isn’t a holster on Mordecai’s chest? 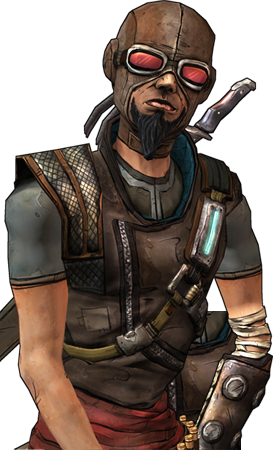 I mean, I’ve always loved how GBX explained their version of Hammerspace with Digistruct technology(that’s the holster looking thing on every playable character’s thigh), but Mordecai is the only dude out there with one of these things on his chest.

Maybe being continually re/de digiconstructed is how Bloodwing got the sex change?
(it’s my headcanon now, I dun care if that’s not how Mr. Burch said it, I like this more)
Anyway, had never really looked at that part of the coolest outfit out there.

That’s a cool theory actually, Bloodwing being digistructed out and into battle. I’m pretty sure Bloodwing would be a regular flying companion, as in he/she is flying around on his own and comes to Mordecai when he calls him/her. We do know that action skills aren’t necessarily all canon, so action skill duration/cooldown don’t exist so Bloodwing might as well always be on Mordecai’s shoulder or attacking enemies 24/7. For me, the sex change is just Burch/GBX ■■■■■■ up.

Yet, the whole thing could have been quickly and easily cleaned up with a lampshaded “I never bothered to check” line.

I like the way you think Billthebetta. I too comtemplated this exact thing a couple years ago and came up with that same theory. That its where Bloodwing resides. I mean, if you watch Mordecai summon Bloodwing, he kinda sorta grabs at his digistruct module to do so.

Or I could just be grasping at straws here and its totally possible I overthought it…Ha.

Sounds like a good theory, but I don’t think that’s the case. I think he’s just reaching his hand out like if you were setting a bird free.

Best part of this post. If Blood isn’t killing stuff in every engagement, then you aren’t using Mordi to his full potential.

But I like this concept. Makes me wish he actually had a Digistruct console on his bracer.

if you have a higher killcount than bloodwing, you have done something horribly wrong.

There’s stats for that?

no, but if you can actually see bloodwings enemys corpses you’re doing something wrong. i can kill everything in a room with just bloodwing, easy.

I checked this out in split-screen. What I saw supports the theory that Bloodwing is digiconstructed into and out of battle. For what it’s worth I think it’s a pretty cool aspect of Mords character.

So at which Level will Bloodwing evolve?

Bloodwing doesn’t evolve by level, you have to use an Eridium Stone.