I’ve done this mission twice, and gotten the E-gun reward both times, because purple laser > green grenade mod. But is it really? Should I just turn the mission in to Pickle and hope for a useful nade? Are there any interesting effects that have escaped my notice? Do any of the playable characters have any synergy with it that I haven’t sussed out yet? Or is it just something to sell or grind? 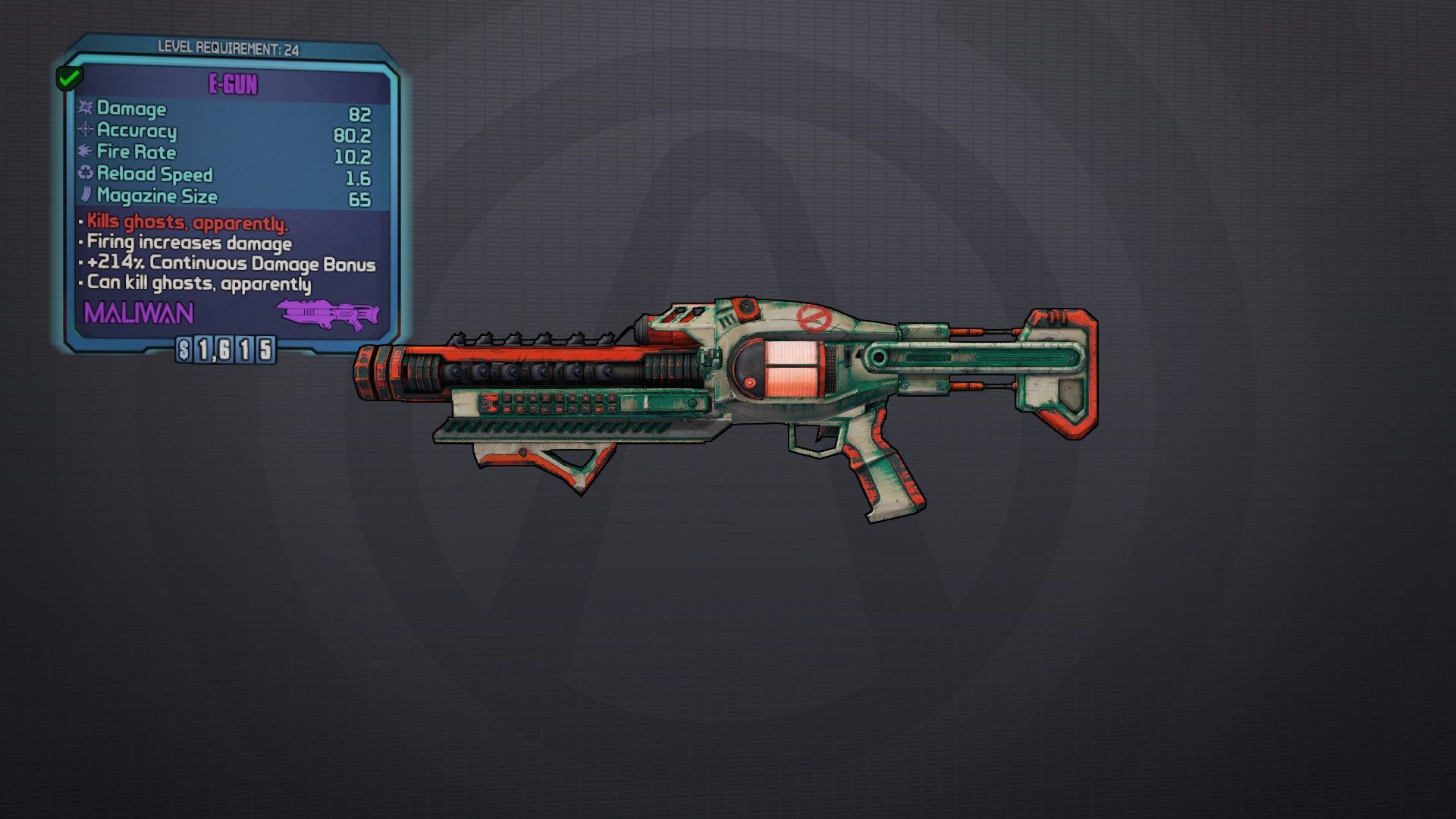 Particularly good on Nisha, apparently, due to greatly reduced recoil?

Funny thing, I actually read that before I created this, now apparently unnecessary, topic. PewNishaN prefers Jakobs arms unless element matching, but maybe I’ll start her up a sibling that prefers lasers one day. Oh well… I guess on to the next permutation of the topic, namely: Has anyone had any positive/negative experiences with it? Did it terminate any digital nuisances with particular speed? Regale me with tales of its epic wins, or fails, please.

It’s a solid laser, but the recoil is brutal.

Now this is a keeper:

I’ve found that the E-Gun, with its pseudo-incendiary beam, can be nice for taking on the DRS in Overlook if you’re insistent on using lasers. Otherwise, it’s a solid-but-not-great laser option that you can take advantage of when you first acquire it. I tend to view it as more of a leveling weapon than an endgame piece.

It’s a fire laser with none of the upsides, and all of the downsides. A normal purple Maliwan beam will out perform it, and a glitch one will blow it out of the water.

It’s not bad, but it’s nothing of note.

In my very first playthrough of TPS I remember keeping the Vibra Pulse from level 16 (IIRC) to TVHM when I got a brand new one, it’s extremely good.

On topic : the E-GUN is pretty intersting as it’s the only non-elemental laser in the game, and IMO it looks great. But get yourself an Absolute Zero and it will blow the E-GUN out of the water.

I definitely like the Vibra Pulse. It was TheClapIsATrap’s main weapon for dropping the Sentinel, and I’m certain that I’ll be using it plenty in subsequent playthroughs (read: until I get one at a higher level). I tried the E-gun once outside of the mission, and the recoil got it pushed out of an equip slot real quick. So I’ve decided to vendor the ones I have, but I am still curious to know if anyone has given this maligned piece of gear a second or third chance.

I am still curious to know if anyone has given this maligned piece of gear a second or third chance.

I once cooked a build focused on the E-GUN with Nisha, and it absolutely melted everything.
But then again, what Maliwan Beam Laser doesn’t shine with her ? As I and others said earlier get yourself a Vibra Pulse, a glitched Splitter or an Absolute Zero and they will totally outperform the E-GUN on every single character.

Vibra Pulse, a glitched Splitter or an Absolute Zero

Check, and I’ll take a Claptastic Voyage for the first time trying for the next two items, after I get PewNishaN through Normal, probably later today.

I have tried to. Since it was nonelemental, I thought it’d work great with Nisha’s Hot Lead skill. But for some reason the game still recognizes it as a fire gun for some things, and not a nonelemental one. That is what I meant by “it has all the downsides, and none of the upsides of a fire gun”.

And all that and it still has the same card stats as a purple Maliwan beam, so what’s the point? As it’s special effect is literally being a subpar fire beam.

(Oh, it looks like it even has a bit less continuous damage bonus.)

I trusted you at your word, you being Pandora’s Industrial Engineer and all. Thank you for elaborating. It’s definitely not worth anything to me past the references to Ghostbusters attached to it, although now I wonder if something happens when two or more players cross the streams. It’d be interesting if the damage stacked, but that seems like something folks here would’ve already tried. I’d be amused even if it only uttered a parody of anything Egon said about it, but not enough to go out of my way to test it.

If the Adaptive Glitches can’t match elements with it, that would be one use for it in a laser-focused build with Wilhelm for example.

As it’s special effect is literally being a subpar fire beam.

B-b-but… it can kill ghosts!

I just wanted to elaborate on the second chance I gave it, I didn’t think that you doubted me. But nice to know you trusted my word.

If the Adaptive Glitches can’t match elements with it

True, but you could also just switch to a different element laser.

B-b-but… it can kill ghosts!

You got me there, I forgot about the side quest. Sad thing though is, once you can actually own the gun, you can’t actually kill more ghost.

True, but you could also just switch to a different element laser.

True, but why bother when you’ve got an E-Gun. You get that continuous damage bonus uninterrupted.

And you can always reset your play through to kill more Ghosts.

In all honesty it’s a situational novelty weapon, more of a trophy than anything, unless a person doesn’t have any on level beam weapons and would like to. In that case it’s useful in that role until something better comes along.

For those of us who overload our Backpacks and use mission rewards to swap out/ pickup & equip desired drops, it’s at least useful as a space creator to grab another weapon.

A lot of people are getting their facts wrong, so here’s the truth:

The E-Gun has great damage and a unique element type that is stronger than fire (2x dmg vs Flesh in UVHM) without being resisted by Shield and Armor, not to mention the 214% continuous bonus. Overall, it is one of the best lasers in the game, but can’t compete with an Ol’ Rosie when min-maxing. It’s still a solid option in terms of damage and has lower recoil than most Maliwan beams, so it’s definitely worth keeping equipped if you don’t have a Rosie of every element yet.

Edit: And on the matter of people saying “Purple Maliwan Beams can outclass it” (barely), I say that the E-Gun still has better elemental modifier than fire, doesn’t need to be switched out for another gun when a resistant enemy appears (losing continuous bonus in the process) and can be farmed MUCH easier

No skills, bar, and I was using a Strafing Run Oz kit which didn’t affect the test.

without being resisted by Shield and Armor

Note the resist being displayed.

not to mention the 214% continuous bonus.

Which is less than a purple beam, can’t proc a DoT, can’t come with luneshine, and can’t even come close to competing with a glitch beam.

A lot of people are getting their facts wrong, so here’s the truth:

I don’t take too kindly to having my words be called “false” without evidence to back it up. Which I suggest you should do in the future, to prevent making a fool out of yourself, and so that you get off on the right foot.

I make mistakes every now an then, just like anyone else. But you shouldn’t accuse someone, even if you don’t mention their name directly.

I was not specifically talking about you, so there’s no reason to take it personally and get all butthurt. Also, the damage against Flesh/Shield/Armor results you produced in the above comment do not reflect how the gun performs in my game. Not sure if it’s because I’m on PS4, but I’ve done enough testing to know that my E-Gun works exactly as I described.

And, as a side note, Luneshine bonuses are pretty lackluster and don’t really make or break a weapon