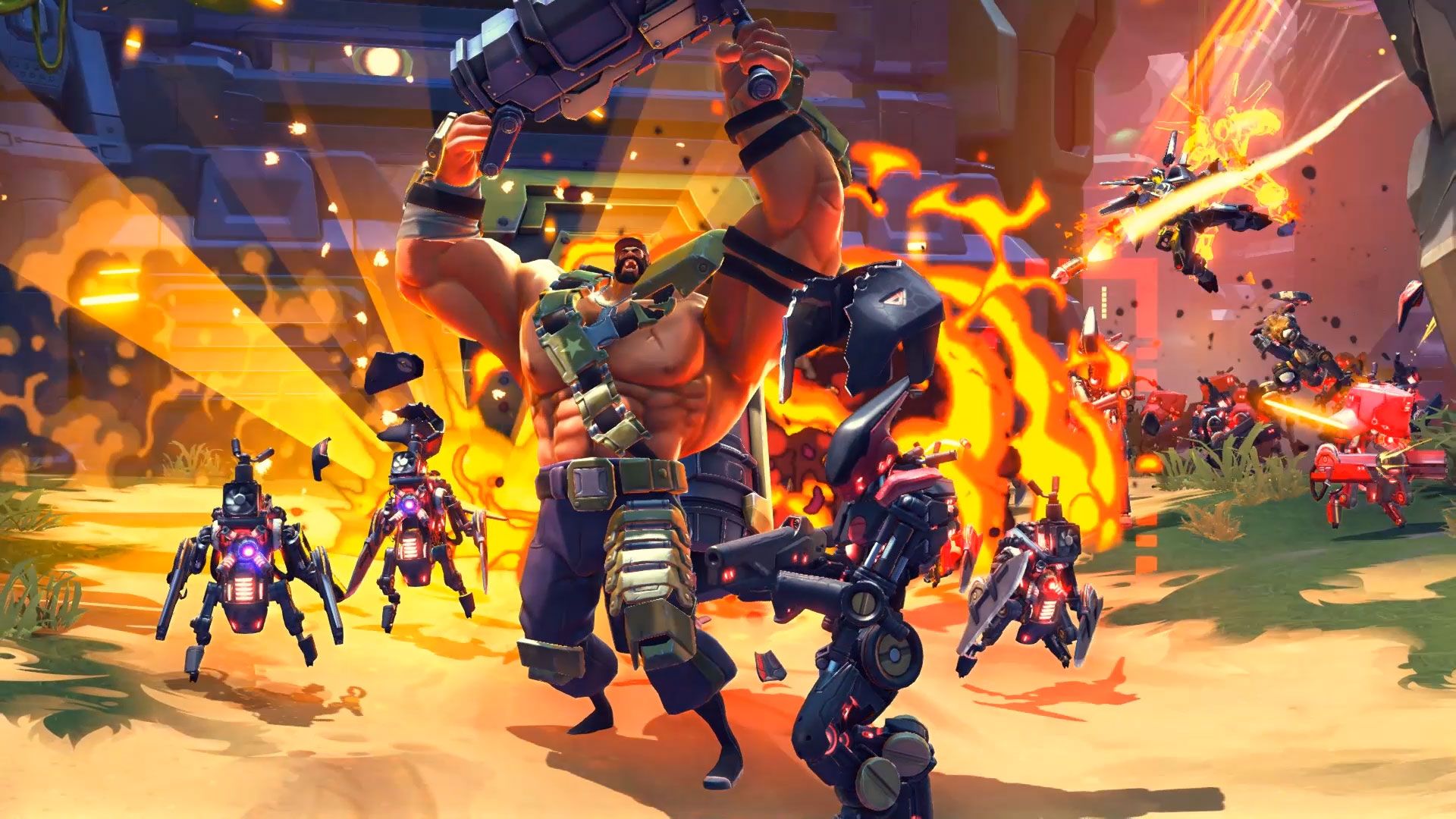 Battleborn now has a Free Trial, what does that mean?

The Battleborn Free Trial is a whole new way to experience Battleborn without having to pay a dime. The Free Trial encompasses UNLIMITED Competitive Multiplayer play, including access to all four competitive multiplayer modes, a rotating roster of free playable heroes, and the same character and account growth and progression you would find in the full game.

Yes, with the Free Trial, you can play UNLIMITED Competitive Multiplayer matches, no time limits or artificial level caps. Everyone who downloads the Free Trial will have access to all four competitive modes: Incursion, Meltdown, Capture, and Face-Off, with a fifth mode, Supercharge, arriving on Thursday, June 22, 2017.

Each Free Trial player will also have access to a subset of Battleborn’s 30 unique heroes through a rotating roster of six heroes that changes weekly. Love a hero and want to keep playing after the roster changes? No problem! Unlock your favorite hero from the in-game Marketplace using Credits earned while playing matches. Or with Platinum premium currency, unlock your favorite heroes and customize them with a myriad of skins and taunts.

When is the Free Trial available?

The Free Trial is now available globally on Steam and Xbox One, and is available in the Americas on PS4. For Sony Europe and Sony Japan, the Free Trial will be available starting June 13, 2017.

The Battleborn Free Trial is available on PlayStation 4, Xbox one, and Steam. Search for Battleborn in the PlayStation, Xbox, or Steam stores and head to the store page. Each page will have a “Try Now” button to download the Free Trial.

PS Plus and Xbox Live Gold memberships are required to play the Free Trial.

We love that you’re enjoying Battleborn’s Competitive Multiplayer! If you’re interested in unlocking more heroes, further customizing your favorite hero, or even playing the Story Mode missions, there’s a whole Marketplace to choose from. Keep reading to see how you can upgrade your Battleborn experience.

What does it mean to upgrade Battleborn?

Upgrading Battleborn means getting access to the full base game, including unlocking all 25 base characters, all eight Story Mode missions and the Prologue, and permanent access to private matches.

What happens to my Free Trial progress when I upgrade?

When you upgrade Battleborn from the Free Trial to the full base game, all of your player progression stats – Command Rank and Character Rank – will carry over. Character challenges and masteries will also carry over, and you will be granted access to earn the character masteries that are only available through Story Mode missions.

PlayStation 4, Xbox One, and Steam achievements or trophies will also be granted upon upgrading to the full game. In order to complete the transfer of challenges, masteries, achievements, and trophies, complete the task one more time by hopping into a match or mission to complete the action (ex. get a kill, play as a Peacekeeper) and earn the corresponding reward.

How do I upgrade to the full game?

To upgrade digitally, the full game can be found in the PlayStation, Xbox, and Steam digital storefronts. If you want to hoof it to get a physical disc, there’s a chance you can snag the base game for a nice discount at your favorite retailer.

Remember: on console, if playing the game with a physical disc, the disc is required to be in the console tray to play the full game. Ejecting the disc from the console tray will revert the game to the Free Trial version with unlimited Competitive Multiplayer gameplay AND any a la carte content you purchased. You WILL keep any a la carte purchases you may have made, such as characters, taunts, or Story Operations. Pop the disc back in and you’re back to the full version.

Season Pass content is available within the Battleborn in-game Marketplace for anyone to purchase, whether you have the full game or the Fee Trial. This includes all five replayable Story Operations and heroes 26 through 30 (Alani, Pendles, Ernest, Kid Ultra, and Beatrix). Each Story Operation also includes a variety of skins, taunts, and titles that you can unlock by playing the Operation.

What if I already own characters or a Story Operation when I upgrade?

Great question! If you upgrade to the full game or purchase the Season Pass bundle, AND you already own some of the content in the bundle, you will be credited the value of that content in Credits, the currency earned in-game.

For example, if you already own three Battleborn heroes (let’s say Thorn, Boldur, and Alani), and want to upgrade to the full base game, you will be granted earned Credits for the heroes that are part of the base game (Thorn and Boldur). Alani is a DLC hero (heroes 26 through 30) and was part of the Season Pass, not the base game. As such, her Credits value would not be included when upgrading to the base game.

Not ready to upgrade?

Not a problem! There are many a la carte options to suit how you want to play. Check out the in-game Marketplace to get as many extras or as few as you want. From boosters that will increase your XP gain for a day, to the full package of Season Pass content complete with five Story Operations and heroes 26 through 30. The choice is yours.

In the Marketplace, you’ll find a number of items that can be purchased with Credits earned in-game or Platinum premium currency.

What can I expect as a new player or if I haven’t played Battleborn in a while?

There have been TONS of updates, additions, and changes to Battleborn since launch – Over 1,600 changes, in fact! Keep going to see what the big changes are for new players.

Novice Queue – With the launch of the Free Trial, we’re also introducing a queue specifically for new players. This queue was created just so new and lower rank players can learn the ropes without having to go up against more experienced players. Even if you’re a quick learner or an experienced MOBA player, we wanted to give you enough time to find your Battleborn play style and favorite heroes.

Don’t worry, you won’t be stuck in the Novice Queue forever. Once you reach Command Rank 20, the Novice Queue will disappear and you will be able to join other Battleborn players in the regular queues.

Matchmaking is an ever evolving process that we’re continually working on. As more players join Battleborn, we will keep refining this process using players’ Elo ranking to make it the best experience possible.

Free Hero Rotation – Each week six of Battleborn’s 30 unique heroes will be available for everyone to play. This weekly rotation will give you the opportunity to play all of Battleborn’s heroes and find your favorites. If you love a hero and don’t want to wait for them to be back in the rotation, you can permanently unlock that hero from the in-game Marketplace.

Training Modes – Prior to the Free Trial, we introduced brand new training modes to help players of all skill levels master Battleborn.

Play UNLIMITED Competitive Multiplayer matches in the Battleborn Free Trial! Become one of 30 badass heroes as you fight in four unique PvP modes to claim what's left of the universe. Join the...

Why is this only 1.8 shards per second?

Edit: Answered my own question, it has no negative I guess

More so, it has been a joy and a privilege to interact with the Battleborn community over the past year, and we want to show you how much you mean to us. We consider you our Founders and we’ve created something special just for you.

I’m glad to have been part of your year long extended beta.

Competitive and Casual only queue’s have never been popular and you always end up changing them eventually. So rather than wait this one out can we please cut the middle time and switch the queue’s? I’d settle for some way of being able to choose game type without having to solo draft.

“Try Trial Now” Button is not appearing on the steam store :[ 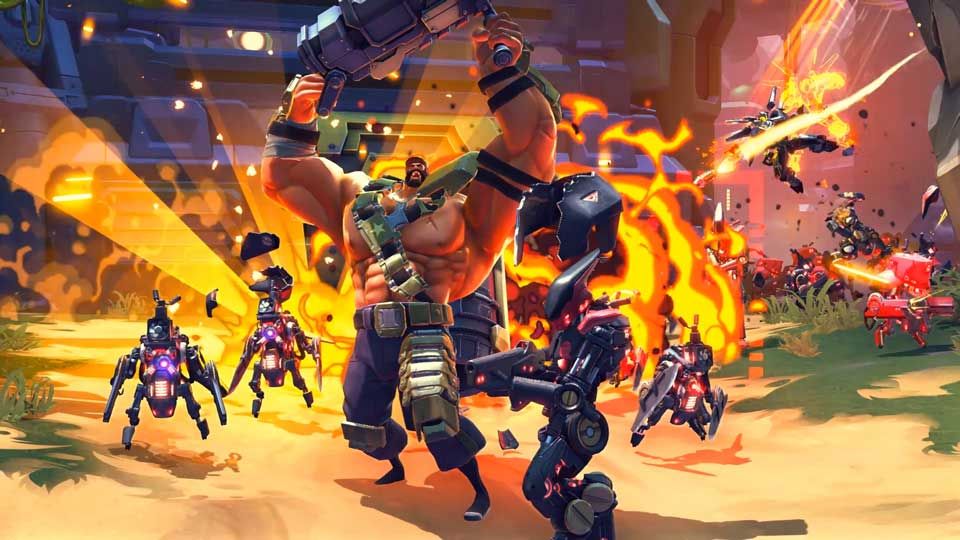 Answers to your questions about Battleborn's Free Trial

Where is the marketing?

Unfortunately It’ll be a while until founders start seeing newer players more regularly with the novice queue, but at least they won’t be pup stomped on their first day.

so i just checked ps store and its not on their. is the trial coming out for ps4 too?

Am I the only one slightly aroused by this news?

You had to wait until 9am PST for it to pop up. You can download it now as the demo.

Now let’s pray for thousands of new and cool players and good matchmaking.

I need more pieces of flair. Is there a special bonus if you equip 37 pieces?