I’ve been playing Battleborn since day one and played several fps/mobas before like Hots, Dota, Lol and Smite. I going direct to the point.

Battleborn has the worst matchmaking I’ve ever see in a game, don’t know how, don’t in which criteria is based to put players together, but this image is only one of the examples of my last 10 games 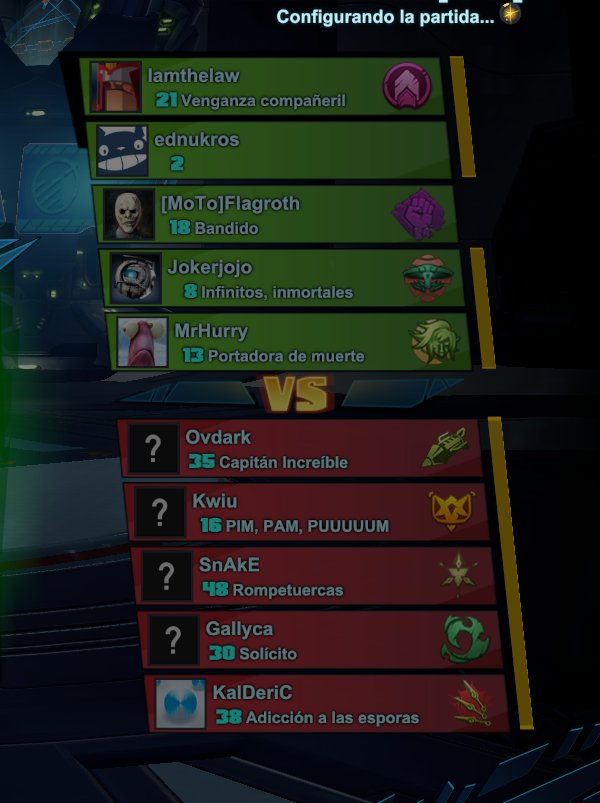 In about…my last 10 games, I’ve faced teams with ALL OF MY RIVALS were level +30 or even more, while in my team MOST OF MY TEAMMATES were level -10 or even less.

The more games I play, the more games this happens. It didn’t happen in the first days after the launch, but now, it’s simply amazing the highly unbalanced teams I have to play with. The funny thing is that never happen that my team is over leveled vs my rival team.

Don’t know if this is happening only to me, in the last days or simply I have “bad luck” in every game I’ve played, but the experience is becoming awful with every game I play.

Jythri (Creative Director) has said this about matchmaking:

[QUOTE]Matchmaking. Your player level score is not used at all in matchmaking. They use a hidden (for now) ELO score to facilitate matchmaking. ELO rating is more than K/D average, it’s based on wins and losses, based on who you win or lose too. The stronger the opponent, the more ELO rating you get. If you lose to a weaker opponent, you lose more ELO.[/QUOTE]

[QUOTE]The data is not 100% supporting the feeling that a 5-man group will curb stomp everyone else. They’re doing data analysis right now.[/QUOTE] And as I put in my match making thread their ELO claim is flat out false. 116 wins 38 losses at lv 46 while with my premade everyone has insane W/L records like this. if they really have a hidden ELO explain why i fight single digit level players… 47 straight wins tonight… Unlocked Gault tonight 17 wins 0 losses still dont see how a lv 2 could have an ELO anywhere near mine or my team…

Well Gearbox would currently disagree with you. They do have a lot more data to go on than our own views of only what we see.

As was also stated in that thread, if you often play with the overpowered Galilea then it’s not surprising that you win a lot.

pick a champion Ill get a 90% win ratio without an issue. Currently proving this point by usin Gault I will bet money ill hit 100 wins before i hit 10 losses at this point I haven’t played much since the beta due to lag so my command rank is only 10. Does that make me a bad player? No.

IMO it shouldn’t even be shown in the matchmaking screen. It’s irrelevant.

Because you think “how long someone has played yet” isn’t important ?
Unless for beta & CTT players, a rank 3 is definitely a newbie compared to a rank 20.
Do you really think a rank 5 like on this screenshot has any change against some lvl 45 players ? They played like 20 time more than him. I do agree there isn’t much difference between a level 20 and 40, but too low level shouldn’t be matched against this.

Yes they do have a chance. If they already know how to play the mode, and are good at shooters.

That’s all you need to have a chance. Command rank doesn’t imply anything other than what characters you have.

It does mean more than the character.
Someone with a higher command rank knows more characters, how they work, how to play against them, how their animations & abilities look like etc etc…
“the character” isn’t even a question of command rank, I unlocked ghal at lvl 16, that’s what the challenge unlock is for.
We’re talking about a moba-like game, do you think someone is good at LoL or DotA because they know “how to click on the right enemy” ? No, and it’s the same here, you can’t be good at battleborn just because “you are good at shooters” and because you know the rules (which are explained at the begining of each round)

Even if he says this i feel this is a very bad direction to go with a very new game. There is no point of using an elo system outside of either ranked or capped limits. For example in league When your level1-10 you are not playing with lvl 30s unless you yourself are premading with a lvl 30 friend. So lets say you are smurfing, and haven’t lost a game yet and have a great elo rating, you STILL will not be intentionally pitted against higher level summoners until you get into those brackets- the same is for smite, Hots etc. Using and elo system this early in the game is pointless and causing the community unneeded stress. It would’ve been much easier to simply make a pvp level and a pve level just like they have two different ways to unlock most champs. Then regarding pvp elo shouldn’t kick into til about lvl 40 since that is when you have fully unlocked all other characters by experience even if you have played PvE til level 40 you still have ALOT of game experience to be versatile in pvp. That way placing maybe 2-9, 10-19,20-29-30-39 brackets would better smooth out the matchmaking. This elo distribution system could take weeks maybe even months to balance and it’s hurting EVERYONE. I was one of the lead people who argued on league forums and tribunal to change their early elo system and they DID, just because it is implemented doesn’t make it right, fair or perfect. It’s burning tons of players out, and it’s hurting the community as a whole to just tell them to wait their elo out.

At least someone agrees…
But I feel like the problem is more (for pc at least) “they lack of player to make you match with”.
The 5+ min queue shows us that the game lack of players… a lot.
It’s hard to find people around your level when there aren’t any available

I normally don’t wait more than 2 m for been queued, but as I pictured and other mates have told here, the Matchmaking is totally senseless.

The devs could say anything they want on reddit (they don’t even answer HERE in the OFFICIAL FORUM), but my experience as a player, and as I can see the experience from other players, is totally awful in this matter

I actually agree that the matchmaking is pretty bad I just think you guys are putting way too much emphasis on command rank. A low ranked player who is good at FPS could easily own a high ranked player. BB isn’t as anywhere near as complicated as Smite or LoL so total playtime matters less IMO.

[quote=“Ana, post:9, topic:1437569”]
Yes they do have a chance. If they already know how to play the mode, and are good at shooters.
[/quote]And if, like me, they’re entirely new to the game and play literally zero competitive shooters (mostly because I’m terrible)? It sure is fun to go up against not only an extremely skilled player, but one who knows the maps, characters and best strategies who is level 40+…

This needs to be fixed before players start leaving in large numbers. We’re still entitled to a refund at this point, and there are other competitive shooters or other genres that we could easily throw that $80 at.

[quote=“Ryballs, post:14, topic:1437569”]
A low ranked player who is good at FPS could easily own a high ranked player.
[/quote]Absolutely, which is why even showing the command rank in the menu is a terrible idea. It’s also why they need a better system to begin with, even if it’s just a win/loss ratio (and surrender does not count). No way should someone with a 1:15 win:loss ratio be put against players who are 20:1. That alone should be enough to somewhat show how skilled a player is.

That’s incorrect, the developers are often posting here on these forums. That’s what the Dev Tracker link at the top of the Battleborn forums is for, to easily see their posts.

To be honest: If about 100 people are ranting, crying and cursing you, would you take the time and reply to each message, even if 50% of them are the very same rant?
Its not that the Devs do not care, its just pointless to make 1000 times the same explanation to single users when the next day 1000 more are asking the same questions. Its kind of a Sysiphos task. Not a developer task.

And in that regard: I never came across a game company that its so close in touch with their community. Maybe GrindingGearGames, but that was some years ago when PoE was still in the Beta.

As Martok said: Use the Dev-tracker here or if you´ve a question ask them directly by using the “@ insert name” function. Just don´t expect an answer when 20 or 100 other asked the same already.

a rank 3 is definitely a newbie compared to a rank 20.Do you really think a rank 5 like on this screenshot has any change against some lvl 45 players

Agreed, but passed level 15 the lines get more blurred. That’s why people say level does not matter as much and I tend to agree with that as well. Level does not take talent and experience in similar games into account.

I think you can say that two people of similar level doesn’t necessarily imply skill. Two players in their 20s might have a huge difference in skill, of course, but I myself (and I suspect most other people as well) cringe when I have a level 2 on my team versus a level 50. Maybe it’s the greatest level 2 to every play a shooter, and they just now picked up the game, and the level 50 has only played story mode and doesn’t even understand the objective in Incursion. Maybe that’s what will happen. More than likely it’s a brand new player still learning the game versus someone who definitely knows what they are doing.

Thats a delusional statement a level 2 has played the prolog and thats it. Acting like hoping for a .000001% the lv2 can out skill a 50 is stupid.