A dumb question that has probably been asked before but since I’m bad at searching, I can’t find a thread for it.

When you reload an empty magazine to gain the Legendary Effect of:

does that stack? As in, first empty magazine is Mag 1. You reload it to get 15% reload speed and attack speed (assuming that’s the same as fire rate) on Mag 2. You empty Mag 2 of bullets, then reload it to get the bonus for Mag 3. Does Mag 3 have 15% more reload speed and attack speed than Mag 2? I don’t think that’s how it works, but I just want to know. It does kinda feel like my overall speed is increasing the more empty mags I reload, but that could just be my brain messing with me.

No, it doesn’t stack. If it did than WF’s DPS would approach infinity and he would eventually kill anything and everything near instantaneously. That said, it’s still one of the best pieces of gear in the game.

Don’t give gearbox any ideas! That would be the most busted thing if it worked like that. It is one of the best character specific/lore legendaries already imo.

I can’t agree with that. I think it’s my old CoD and Halo reflexes, but I rarely shoot until my magazines are empty. I’m almost always reloading so that I’m always facing people with full clips, so I wouldn’t get the legendary benefit from it.
instead, I run this to fit my playstyle. 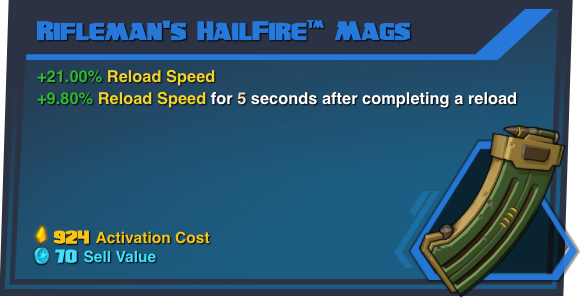 I haven’t played in a long time but it does help that the legendary shard costs were cut down (which is what kept them from being viable). the cost to added effect wasn’t often worth it.

Now, the only problem is not having enough gear sets to specialize sets for all the characters I play. For instance, my WF set would work really well for playing OM or Marquis or Caldy, etc, but would be a lot less attractive to use for multiple characters if I replaced that mag with WF legendary gear.

That is a great reload gear and I agree that it’s better for more than one character but you could say that when comparing any character specific gear to any non character specific one. I said I thought it was one of the best character specific gears and it is. As for the issue of emptying the entire clip, this is not a game where you can kill someone with a few well placed shots like cod. You are going to have to dump an entire clip into most characters just to put a dent in them. The only character that gets a benefit from reloading with bullets left in the mag is Oscar mike and that is because he is the “cod quick twitch shooter character”. Most of the time reloading early will hurt your overall damage output.

I thought about mentioning it but didn’t bother.

and many other times, you or your opponents run and break the engagement before the mag is empty, so it always seemed a waste of time to empty the mag into the scenery to get it to proc. The timing for it was too rare and its use as intended was so rare that i couldn’t help but ditch it after trying it out.

Seems to be a specific play style choice. I never took Whiskey’s legendary into PvP so I can’t speak on that front, but I did enjoy using his orange for sustained DPS on the bosses. Keep firing until the clip is empty, reload, fire faster and reload faster, chain indefinitely for high damage output. I’d assume a similar school of thought applies to Whiskey vs most of the big boys. Sustained DPS with high accuracy on the likes of Toby, Montana and ISIC will easily pressure them out of lane. His decent speed and health pool lets him actually follow up with a chase if the current battlefield permits, too. Tack that in with slows, stuns, silence, etc and that makes Whiskey’s orange rather attractive, even against Kelvin.

His passive also makes it so bullet management during damage boosts are important. Very easy to kill a minion and then immediately switch to a Battleborn, where wasting time reloading during the passive will hurt.

That’s like saying that the double hug is no good because of its condition. @HandsomeCam I’m not saying you ever miss a double hug, but hypothetically, if you did, would you ever drop a mine just to set up the next one?

If i know i don’t need a stun for the 12 seconds of cooldown that will ensue? Yes; every chance i get. Micromanaging gear and power conditions is just something one does when the reward is worth it; a follow up stun is most DEFINITELY worth it. Characters with stacks are no different.

Yep; although i go for a health regen build on Whiskey, and instead fire once and reload for the extra effect from Vyn’s Quiver.

But his lore Legendary is the only thing that makes him “good”.

Of course, I’m more than a little biased in that I want Whiskey to be the strongest Battleborn.