“Yes, absolutely [it will run at 1080p on PS4 and Xbox One]. That is always the plan. The game is still in development so you never know. But 1080p is the goal and that is what we are trying to achieve.” 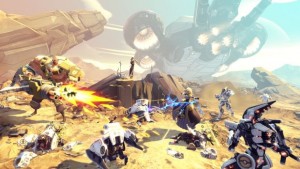 That's always been the plan for Gearbox's upcoming co-op shooter.

Nothing about frame rate in there

I guess we will find out more on framerate closer to launch as the game is still being optimized.

This is a continuation of a older thread:

Any details on what it is for PS4 and XONE even though it might be subject to change?

Unfortunately that thread is currently locked due to trolling =/

that 60fps seems to be an issue for alot of games out lately, but some have managed to pull it off, Hope GB gets it figured out to play at 60fps or higher on PC, game would really hit home for alot looking for higher framerate on gameplay, would be a plus for them on this game if they get that worked out to work good on this game, just saying, they had issues with the Handsome collection on that, hoping they get those bugs worked out for this game, sense its most likely the same engine just tweaked in ways

The fps will also depend on what FoV the game is set on for Consoles.
You might have 60fps in 1080p on a XBoxOne, but also have a forced 60° FoV.

Well to be fair most games on pc run at 60 fps and more its just a few big AAA new titles that came out. Im not worried about battleborn having unlimited frames on pc

I heard that with the new Direct X there is a tool that helps optimize games for xbox one. This has something to do with making good use of the memory subsystem that adds an additional 32 MB of “embedded static” RAM (ESRAM). This might be something that @scottv could explain.

so maybe there is more hope then you think

More on the res thing, Any chance of a “use native resolution” option for PC? I’d really like to run a game using mosaic and get a silly wide field of view during campaigns and such.

If the “has” to come out on 60fps if they want to push competitive game play. The story is good and funny, but we know multiplayer is basically the end game. If the frame rate isn’t made to par on console think anyone looking for console ranking might be disappointed. Some people are already pulling away just from the idea of the game running on 30fps.

I’m other news, ISIC is the man.

Maybe I missed it but I don’t see people complaining about that.

Destiny is 30fps, but no one complains about it because Destiny doesn’t have a Pro-Leauge. If Battleborn is gonna be a “We are not a Moba” MOBA then higher frame rate is needed if Gearbox wants this game to become a E-sport. I assume they do because (Pffffffft) 8 story missions that look like they are going to take 5 hours max to finish.

One of my biggest issues with BB so far is has story mode that (debatable) worst than Destiny, and a MP that doesn’t really take itself serious. Is BB aiming for a good story? or a good MP? Cuz from the beta the Story looks short, and a bunch of unconnected missions. And the MP between the Maps and the how the modes work also needs work.