Yeah that’s what happens to me when I play in borderless window (sometimes); I can ctrl-alt-del and then get back into game. When playing exclusive fullscreen it just pops up the error message and then I have to exit it.

Update: Disabled RTSS overlay and doubled checked to make sure steam overlay was disabled too.

Did four more Cassius runs with Mechromancer, crashed on two of them.

Switched to Axton and played a couple hours of new DLC, then crashed with him too. I’m pretty much done with this, not much else I can contribute. 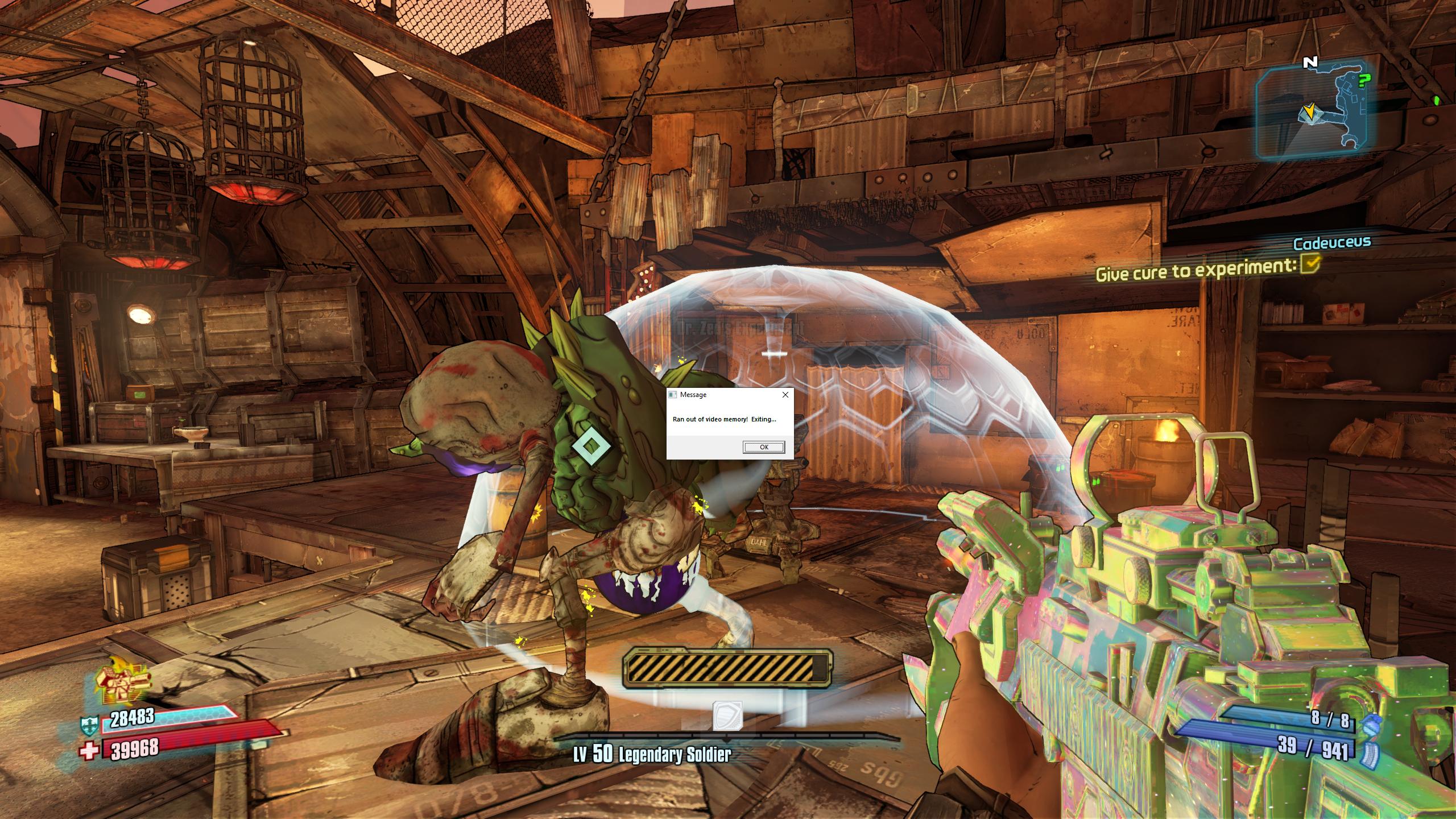 Yeah its an old game, not a massive shock that new tech doesn’t work properly. Lets face it, once BL3 turns up, none of this matters. Roll on September.

I`ve tested everythin on this post and nothing, im so sad. I just wanted to play with my friends until bl3. I hope the gearbox fix this ASAP

So this is what fix I was able to do. I used nvidia experience to set the settings to the recommended which pushed my resolution to 4k Dsr. I then went and change the physx to medium (had it on high for a long time before I got a hard game freeze.) My suggestion is if you have anything higher than a 1060 I’d put it on the maximum resolution your hardware will run in dsr I have yet to have any problems but I havent visited the caustic caverns or the fridge yet to really see. On the other hand this fixed most screen tearing and fps issues I had as well and I no longer get the freezing when I shoot racks out of the sky

Do you guys meet this error when you play or play with Mechromancer? After I read what people say in steamcommunity I found this maybe the problem. I play Zero. It seems fine when I play single game. And I always play multiplayer game with a Mechromancer, he can call the robot. I crashed out with RTX2070 but other people are fine with gtx10xx or 9xx.

Hi y’all, Gaige player here. Our girl is a mess of lighting effects and keeps it crazy. One thing I’ve done is turning off Ambient Occlusion.

Two things here: ambient occlusion is basically a way of rendering shadows based on how the light would realistically affect the world. This means that digi-splosions (like our beautiful purple mess of IO) cause a butt ton of shadow situations it has to figure out.

Part two: someone told me that the way the AO algorithm interfaces with Windows ten is…bad. I don’t know the in depths of this, but, I’ve seen many many less dips since I turned off ambient occlusion AND I still have Physx on medium!

Can confirm, RTX2070s, Gaige with IO using Grog Nozzle, game crashes 100% when IO hits an enemy. Tried running windowed/borderless and turning off AO, no luck.
Granted it’s an old game, but this is quite disheartening for me, since I don’t really enjoy BL3 that much.

So to anyone who crashes with rtx 2070s, I know this sounds crazy but I swear there’s some part of the game the only recognises the rtxs higher vram is by running the game in 4k graphics. I had no problems in crashing while playing gaige after. Though it is quite taxing and there are some framerate issues. But it’s also been awhile since I’ve played bl2. Hope you all figure it out.

Thanks for the info. But I don’t own a 4k monitor also I’d rather enjoy the game at 100+ FPS (using a performance heavy ReShade so the game looks quite beautiful while running at 100 fps @1440p, can’t do the same at 4K for sure), if only I still had my gtx 980 (it finally rested in peace last month after 5 years, that’s why I got this 2070s).

Honestly I think we Gaige mains are screwed because there’s little to no hope that they’ll ever release another update for BL2 at this time. I’m hoping someone from the modding community might find a solution.

I don’t have a 4k monitor either. I just have a really nice 1080p monitor that does 144hz and with my set up at 4k I still hit about 80-100ish fps. But understand able that youre stuck with what you like. I doubt it unless they figure out what’s causing it cause from all I’ve read no one knows for sure the exact problem. Like I said I got it to work and idk if it’s just a lucky loophole I found or what