This is a thing I do. 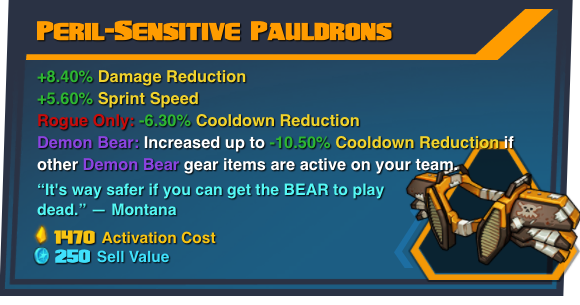 Faction: Rogue, Demon Bear
Where it’s found: Montana and the Demon Bear Rogue (Operations) Commander Pack
Primary Stat: Damage Reduction
Secondary Stat: Sprint Speed
**Legendary Effect:**Rogues equipping this gear will gain an extra -6.30% Cooldown Reduction.
Secondary Legendary Effect: Demon Bear - If any allies on your team have a Demon Bear item equipped, you will gain -10.50% Cooldown Reduction. This effect works regardless of faction. If you are a Rogue and the Demon Bear effect is triggered, your -6.30% Cooldown Reduction will be replaced with -10.50%, rather than gaining up to -16.80% Cooldown Reduction.
Who it’s made for: Shayne and Aurox. It’s a Rogue item that gives damage reduction, and Shaurox is the only one in the Rogues that can really make use of DR, as DR requires high health to make the best of, and Shaurox has high shields and health, which is even better. The sprint speed lets her get away in stealth quicker, but really, that speed boost can go for anyone. The cooldown also helps Shayne’s high cooldowns.
Who it’s good on: (This assumes the Demon Bear effect is being triggered) Shaurox, Montana, Kelvin, Attikus, Galilea, Boldur. Notice how these are tanky guys who could go for a sprint speed buff.

Discuss whatever you want about this gear!

Also, the last two categories, the ones beginning with who, are completely my opinion!

The end of that dlc is so whack at 100 OPs with the Alphas I gave up on damage reduction gear.
Reason? A slight reduction is useless when you are receiving 3k damage.
With just 3 slots it is IMHO much better to generate shards at the beginning and get two great pieces of gear on.
The most important is Aria, you want to dance and dish. DON’T take damage, DISH it out.
The other piece of gear is the best health pump, run and live.

I’ve done that dlc with every character at 100 OPs and what I’ve learned above has really helped.
Even with Mellka