Congratulations on the title. Well deserved

My most favorite artist

I could not be any more happy for you. You deserve every bit of this title.

Thank you for all the amazing visual adventures you have created. I look forward to no other posts more than i do yours!

I would’ve been here first to give you praise if i weren’t busy. If you didn’t deserve this, no one did.

Honestly though, when I first saw you art work, it felt like i was getting mind ■■■■■■ by pure awesomeness. I still feel this feeling everytime.

@JoeKGBX , Thank you so much again for giving me that chance to speak out!
Actually I wrote here only 1.04% of all the details I wanted to mention… Anyway, I’m glad if it turned out interesting enough and everyone who need it could find it and even read it.

I hope further we’ll have many occasions to sweet talks. Because I’m going to make them if you don’t mind

For me this interview is especially valuable, because while i was writing this, it was the very special moment when I became able to look back and scroll all WotH from the beginning and see how much is already done… there is already 80 illustrations in this thread… LOLWUT… yeah… not counting photos of sculptures… and I have almost as many stuff not published yet, waiting for its hour… not counting new sculptures… is that a lot? or maybe just BADASS!?

But still all this is just a prologue…

@Kitty_Jo , Thank you for your kind words, I remember how you warmly greeted me on the old forums,
it was so long ago…
You’ve seen how it’s all started. I really wonder how it looks from your side. I’m still waiting you to tell me what you think about all this, about any detail that caught your attention, what keeps you look forward to this posts and how do you feel about all turnings that happened over this path?

Would You kindly. I need to know how it works in other people’s minds so i could make it better.

While I create all this, I do a lot of research work in anatomy, physics, psychology, philosophy… but for now all I can share is just pathetic side-products of this research… but I always try to put there as much as possible clues for FASCINATING ARCHAEOLOGY

I had used this term until I realized that I do not understand what it means actually.

How it seems, “fans” are the ones who feel the bursts of energy and gather around its source, but they do not understand how it works and what exactly they want from it. They prefer to wear the masks of a faceless daemon, not realizing that it was a critique, rather than pandering to ignorance.
Because most of all they afraid to think and learn from challenges and to be responsible for their actions.

But I always knew why I have come here and what exactly I want.

People sometimes ask me why I’m not making my own setting with my own characters. And I say that I can’t afford to make the new world until I am sure that everything will be okay in the old one I’ve loved, and I don’t want a new character until Mordecai get a worthy continuation of his journey.

Because we become responsible, forever, for what we have tamed.

And I’m still learning. It is very important. If I would started my own setting without experience of Way of the Hunter, that synchronized me with the experience of the great forerunners; I would just make something similar, but I want to promote progress to evolve further. That one really reminds me Miyzaki’s Nausicca Graphic Novel

That’s really funny because I had made this one art long before I read Miyazaki’s Nausicaa of the Valley of the Wind.

But soon I myself have come to this path, and then I’ve read Nausicaa and I completely agree with Miyazaki.

"Way of the Hunter" Borderlands art series by Klopotinsha

It’s said war - war never changes. Men do, through the roads they walk… As I said; I just play it like the game according to the rules, following the logical algorithms.
So there is no free fantasy, only cool calculation.

And I can say that our motives are very similar.
Miyazaki just wanted this girl to attain freedom and happiness.

The same feeling forced me to start dig out Mordecai… Yaaay! Fascinating archaeology and anthropology!

I just could not miss a character with such a rich collection of “previous incarnations”
But unlike Nausicaa, Mordecai is not an innocent girl, it’s wild and dangerous predatory beast, who even could be the monster, who kills little girls in barrels of acid, but It also could be a good father, and Bardolatry maniac, and laughter generator, and badass highwayman and faithful friend, and contemplative traveller who loves his homelands, the “one who has thus gone” and “one who has thus come”… assembling of this mosaic requires more a complicated approach; there are many double standards and more philosophy, than morality… but this philosophy forces to think and leads to compassion and teaches high morality, so that’s why it is so awesome!

By the way, funny how Denis Villeneuve finally explained how Mordecai could lose his appetite…

Gratz! This is some seriously good art

Dear Klopotinsha, my apologies when I’m a bit late to find this topic and congratulate you.
I’ve loved your work since your very best version for Borderlands 2 ending, the great “beach party” on Wam Bam Island, was published.
While waiting for new adventures in Borderlands, it’s been a real joy to see how you’ve kept it alive and made it even more beautiful, versatile and even instructive.
I’m very excited to see your next work of art, even more if it’ll be the whole collection.

Always thought you made some amazing stuff @Klopotinsha.

Just wished to pop up in this thread and say that.

Keep up the grand work.

Still hoping to see some Krieg or Maya, but I’m a patient man.

Dear ErikH,
Thank you so much for your congratulations!
You can never be even a bit late because TIME DOESN’T EXIST! It’s just a concept of human perception! Every moment actually happen si-mul-ta-neo-us-ly – scientists can prove it!!

For me is a great pleasure to communicate with you! And I’m so happy that you enjoyed this brief vacation on Wam Bam Island, which revealed to us FORCE for some action

And if it was really, as you said, versatile and instructive;
I would be glad to share with you The Most Final Epilogue 2 BL2
And hope you will enjoy it.

And, you know, Way of the Hunter is almost finished.
So sooner or later it will be processed into collector’s edition

I am very glad to hear from you, Giuvito!
Thank you for your attention.

Yeah, I just keep on keepin’ on!

be careful with your desires. MWAHAHAHA!

Wait I’m watching her on Deviant from the begining of 2k15.

Just telling that in my spare time of my spare time of my spare time I’m unassumingly preparing my art stuff to use it in unique super badass borderlands art and story book, which will came in set with a graphic novel, i’m doing by myself first of all for myself, to proudly put it on the shelf and to show it on the tea parties only to best and closest friends and my little sister… and maybe I’ll make special single copies of these books to send it as a present for Gearbox if they will behave well

So while keep doing this stuff I decided to edit the first post of WotH thread adding table of contents there to make more comfortable to trace the logic of this thread and see it not as sets of random images around one theme, but as a chronicle of awesome parable journey, or even guide if you would like.

I can’t read your mind so I’m very interested in any written opinion!
eg about global changes in setting, or stages of Mordecai’s evolution, or what would you do if you suddenly found some specific FLOWERS, or which faction/campaign of PEPLUM event would be most interesting for you? Any emotions, any thoughts! just let me know if something caught your attention.
The Great Tentacles would be glad too!

Your attention is very much appreciated!
Besides I don’t write in this thread without adding illustrations, so showing interesting behavior you can suddenly unlock exclusive sketches or even some new illustrations.

"Way of the Hunter" Borderlands art series by Klopotinsha

I wanted to use Mordecai’s personal quote to head this thread, but when he knew that there is so awesome thread dedicated to his marvelous adventures he felt embarrassed and crawled under the cupboard.
…
So I narrate and illustrate here things from face of his True Guardian Angel.
We have seen and felt so many things sad people wouldn’t believe! Keep moving to be stable, free to wander, free to roam, he traveled through lands where no man has gone before, salt and sand scratched his goggles and larvae of funny creatures stuck in his dreadlocks, he watched change of cycles on Pandora and otherworldly glitter around Eridian gates. With our friends we have been through good times of carefree joy, and through bad times of pain and insulting disappointments, and even came to good and most interesting times after bad times. All those moments will not be lost in time, because BADASSES NEVER DIE!

Here is already published quite a lot of details of these stories and OVER 90 QUALITATIVE ILLUSTRATIONS made by ME, so I decided to make a table of contents here to make it easier to navigate and check for fresh stuff:

##III. Way of the Hunter

That archive is brilliant.

Thank you, @Giuvito
Don’t forget to click all this and gaze and listen and read

By the way, recently realized how I feel sometimes when I do all this:

Well deserved for Karina. Yes indeed it is.

I, to put it mildly, do not consider myself a big fan of cosplay culture,
but i found my ordinary work clothes and requisite (and especially amount of real dust on all of it) reminding me of bandits from Borderlands. 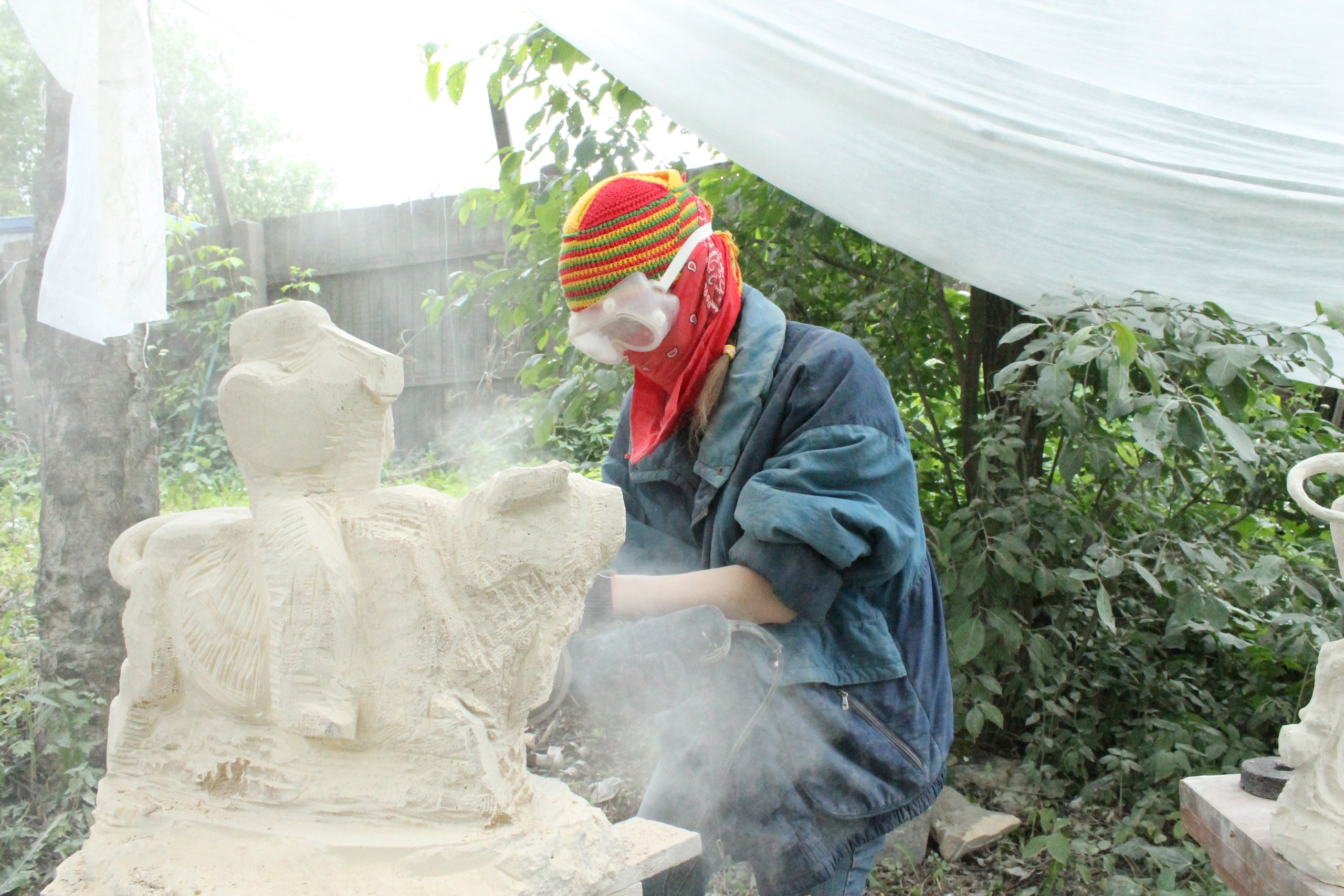 If an angle grinder cuts stone like butter, just imagine what it can do with things of bones and meat!

By the way, I’ve carved stone sculpture of Mordecai (photo can be found in my main thread) without using any electric tools.

If an angle grinder cuts stone like butter, just imagine what it can do with things of bones and meat!

Great line to further my thought.

My thought being that you @Klopotinsha would be an excellent UPC in the next Borderlands installment.