General summation of how the gamers are receiving this

I just did a fresh Battleborn search on YouTube to see what is being said about the Free trial.

This video is a good representation of how those who are trying it now feel.
The actual in-game review starts at 5 mins but he makes some outside points worth hearing.

Lots of good points all around, I feel like this is pretty acurate to how the game plays, and to how things have been for the last year. In all actuallity, the game use to play better (for his criterea) because all the nerfs have made PvE worse.

Would one of you be kind enough to summarize the video for me as my phone is being a troublesome, non-video loading, piece of sh*t?

For the most part he likes the MOBA part but dislikes the cartoon style and the Overwatch type colors.
Using his terms, not my own.

His biggest fail noted is waiting no less than 5 minutes for a match each time.

Getting used to the visual aspect did take me a few weeks last year during and after the beta.

He said the game gets repetitive quickly and is too messy.

Eww those colors. I would have the same opinion if I left the new colors intact. I had to change it to how they were from when BB was released.

He got confused by a map, skills cd and hp/shield

to much going in ur screen. And we demand more icons to let us know about stacks and passives activated.

what should i think?? If he faced 2 orendis while ambra ulted and beni spamed rockets i would say; yeah thats freaking chaotic. But it was a 1v1 incursion.

Ikr and the hud is pretty lean compared to most mobas. He kept referring to OM as the machine gun guy and complained about how the enemies were bullet spongy lol. He also said that there isn’t a gear system, which of course we all know is just plain false but it is notable that new players might not know about gear especially the F2P players since most gear comes from PvE that they don’t have access to.

Still wish they got the Algorithm though

Yeah, that and Toby is what sold ME on the game.

Still never gonna understand people who think there is too much going on with the hud. Health and shields, skills with cd timers when in use, a radar, scoring for the game mode, and I guess the level up icon? You pretty much can’t drop any of these things without severely hampering your ability to do well

Still never gonna understand people who think there is too much going on with the hud. Health and shields, skills with cd timers when in use, a radar, scoring for the game mode, and I guess the level up icon? You pretty much can’t drop any of these things without severely hampering your ability to do well

Many of the popular FPS/shooters just have a blank screen and when you get hit, the screen goes red and if you don’t get hit the screen “unreds” itself. No levels…no shields. Maybe a cooldown timer…maybe

And a .04 second TTK and no minions…just players.s That’s just the way it is.

I just found a funny and relevant meme and naturally felt obligated to share.

A bit less colorful but no less cluttered. The more information I have the better imo.

To be fair, a huge chunk of Battleborn’s UI there would be temporary…

All of the ult notifications in the right and center are momentary.
Helix upgrade notification and gear notifications should be dismissed pretty much as soon as they come up as the play activates helixes or gear.
Voiceover picture is temporary, and only in pve anyway (though I think they could have made the picture much smaller?)

Battleborn has 1 big big drawback - super HUGE like a freakin’ Jupiter guns/hands/staffs/whatever. Even a blind person could see those from 1 mile.

I’m not complaining. I just thought it was funny.

If I were to complain about the hud, it would go like this.
Some of the visuals on the icons are not very intuitive as far as what they mean and it might help if there were a key or something to more clearly describe the meaning of each for noobs. 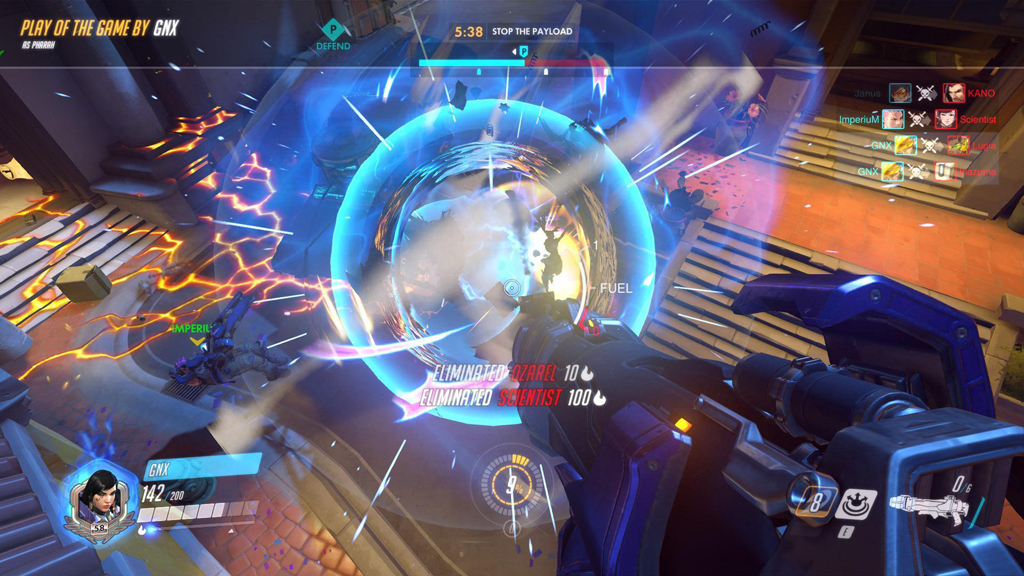 I never really understood why Battleborns UI got so many more complaints about being “cluttered” and visuals too “messy” while from my experience OW is just as bright, colorful and full of everything going on. And I don’t think either of them are too much or whatever.

A lot of these reviews, to me at least, sound like 1) hasn’t played many games overall, especially pvp/moba/mmo games or 2) just looking for anything to nit pick and criticize.
These complaints sound like what my parents said when they looked at me play games as a kid “How do you even know what’s going on?”