Get battleborn free ad on xbox one?

got on my xbox one it was around 8:00 and a ad at the bottom said get battleborn for free or play for free one of them i proceeded to click on it and it just sent me to the buy page to buy the game so i dont know if that was real or not or what i mean i already own the game on disc it was not installed at the moment cause of disc space so it told me to buy the game digital so whats as up with the get battleborn or free thing? its not a game with gold or gold free play days game what was that ad?

Maybe the anniversary will have a Free trial, or possible go Free to play?

if it ever shows up again il take a pic 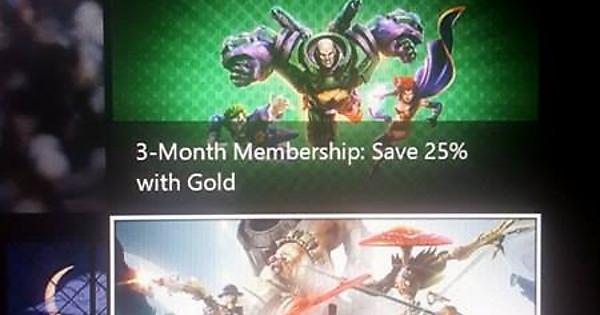 Ooooh maybe there’ll be some new players to take under our wings, right Xbox Peeps?

Tell ya what, you find 4 noobs and I’ll find 4 noobs. We’ll face each other to see who can teach our noobs the fastest, and it will make for some pretty even games.

Tell ya what, you find 4 noobs and I’ll find 4 noobs. We’ll face each other to see who can teach our noobs the fastest, and it will make for some pretty even games

@FlamesForAll he has a good perspective on it!

@loving-hatred what do you mean?

Focused on teaching new players, which Even when we play against them we can take a second to send tips. If they ignore it they’re on their own, but it shows we’re not as scary as we seem from the other side

You’d have a few chances to find good noobs!

I used to do that but I learnt that sending tips/advise can be taken as a condescending action from the one providing them. Most newcomers don’t like to be told what to do even if the intent is to help them. Some will take it, thank you and even seek for more advise (as long as the tone of the message is all nice and colorful of course) but others will get upset or simply ignore the message. It’s best to only provide help when they ask for it.

sending tips/advise can be taken as a condescending action from the one providing them. Most newcomers don’t like to be told what to do even if the intent is to help them. Some will take it and thank you for it as long as the tone of the message is all nice and colorful but others will get upset. It’s best to only provide help when they ask for it.

Some will take it badly, but those that don’t are definitely worth making the effort to keep in the community, remember that our community needs as many people as possible to keep the game alive.

I’ll use one example that was great, I was messing around with pendles against an enemy team with a marquis…he was low health and still sniping, I ran up and killed him once. Then he went to the same spot again…I waited for a good moment and I killed him again, then I checked his level because something seemed off(instead of using his owls to deter me he was dropping them on the minion wave)…CR 4. So I stopped and typed him a quick message

“Put your owls behind you so I can’t attack you as easily, you’ll get a reveal after you level marquis up enough that’ll shut pendles down though(that’s why I targeted you so hard at first)”

I didn’t get a response but he started setting his owls as a defense shortly after. If he took it as intended he could have realized some folks aren’t total pricks, if he didn’t what did I really lose for taking the effort?

“skill can be taught, attitude can’t”

Kudos to you but I moved on past that phase of reaching out to newcomers and trying to help them. If a low level ask/wants help only then I will provide my support. I won’t be taking that initalitive anymore on any game. Players that enjoy the game don’t need anyone to keep them in the community. They will continue playing and learn to be better players with time and practice on their own.

Or you can send a msg saying:
Hey, need some tips?

Sometimes they wont answear some has their settings to dont get msgs from strangers, others will answear immediately and a good amount will try for several hrs/days before answear yes.

Then i redirect them to

How to be a better player

Positioning, map awareness, focuse and minion wave. Positioning: are you in a dangerous position? Are you close enough to a teamate to be saved or save him? Map: where is the enemy? Where are the escape routes? What buildables should be bought first? Focuse: If an ally stuned, slowed, knocked up an enemy, join the fight 2vs1 is better. Dont lose focuse and try to work together. Chaining crowd control skills. Minions: they are dangerous to your sentry or your grinder in meltdown, destroy…

And tell them to ask me anything of they need help.

I’ve been enjoying helping some newcomers (and even some not so new) farm legendary gear. I haven’t been having much fun in pvp lately so I started completing challenges and farming gear. It’s been nice to bring along a newcomer or two. Maybe help them complete a lore challenge. Playing in PvE can be a good environment for giving tips and can give them an opportunity to try new techniques without the constant pressure from the opposition.

I generally don’t waste too much time with really low ranks. I won’t even bother messaging a rank 4 in pvp. Their butts getting stomped into the ground should tell them enough and if they don’t get that message then I’m sure mine would fall on deaf ears.

Next time you see someone who is struggling, but might have potential, offer to help them get a max stat symbiotic gauntlet or something. Then you can work some tips in without it sounding condescending.