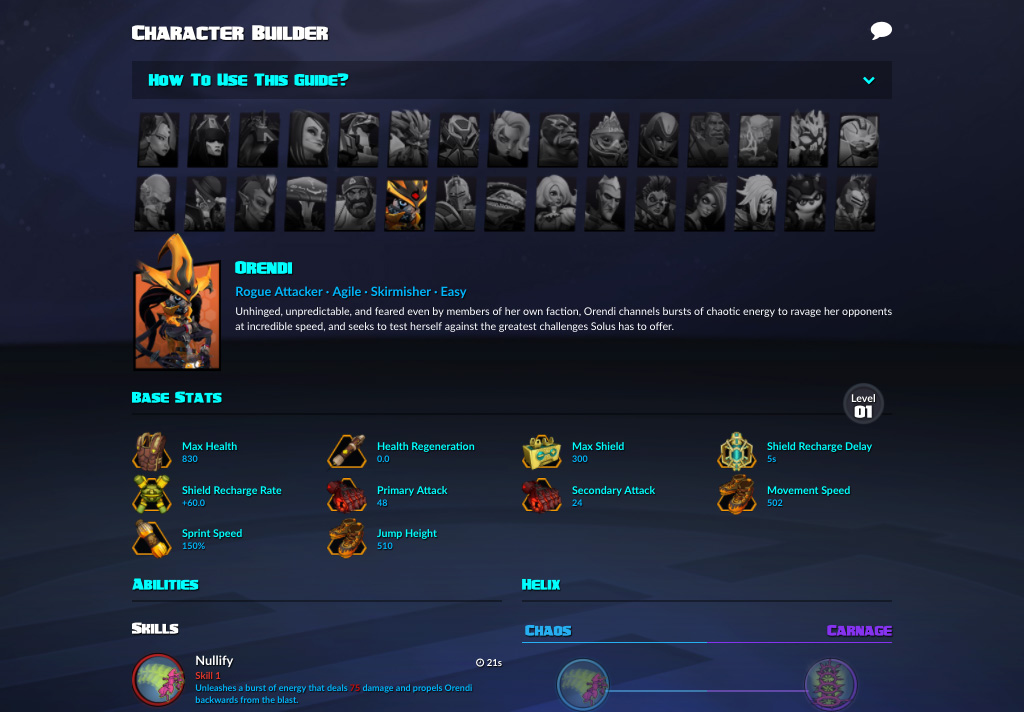 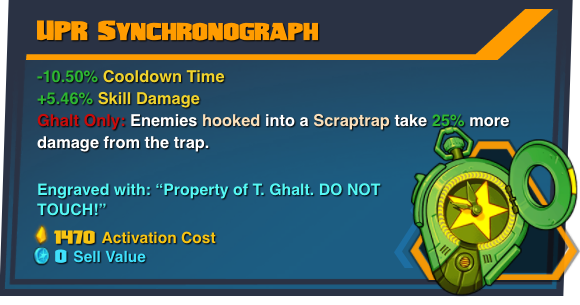 View on lowlidev.com.au
This thing works wonders for your scraptrap damage. And the cooldown may seem miniscule, but it racks up with this: 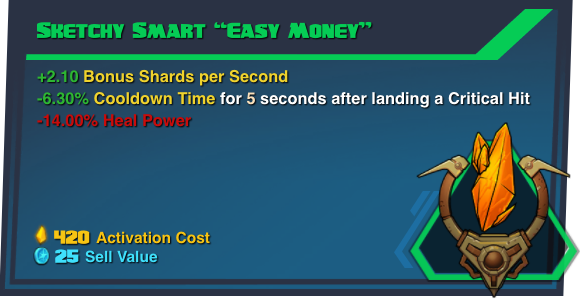 View on lowlidev.com.au
Oh, what a beautiful piece of gear. Bonus shards let you keep building to suppress the enemy team or level faster, and the cooldown boost pairs very nicely with Ghalt’s legendary and helix choices. 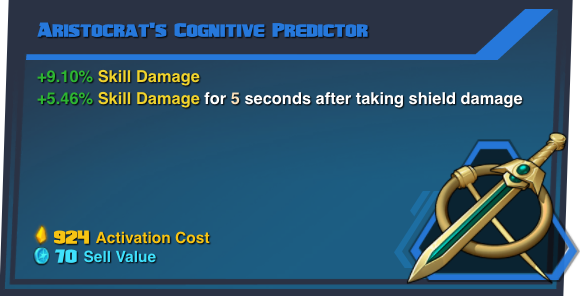 View on lowlidev.com.au
The Cognitive Predictor is pretty friggin’ sick on pretty much any character with a shield buff. Ghalt has Barrier, giving him a total of 540 shield. The skill damage piece that gives extra skl-dmg after taking health damage – its buff only lasts 3 seconds, where as the Predictor’s buff lasts 5. Alternatively, you can try the Rogue version of this gear - it gives bonus skill damage after landing critical hits.

Now that that’s out of the way, it’s time for my shiny build, Ghalt -

Level One: Either
The left-side helix increases your hook’s size (not the chain, but the actual hook part), while the right-side helix cloaks your scraptraps.
This depends on the physical attributes of the enemy team. Are they small and/or skinny? Take Big Hook. Are they big and/or wide? Take Stealth Scrap. Really, Big Hook is typically a more reliable choice, especially if you can’t aim the Hook that well, but if you consider yourself a good… erm, not hooker, a good puller, I mean… then I guess take stealth scrap.

Level Two: The Scrappening
This option makes it so that when a Scraptrap is triggered, after the initial explosion, three bombs will have popped out (in a triangular shape encompassing the trap) and will explode shortly after, dealing roughly the same amount of damage as a regular scraptrap (IIRC) if all three bombs connect.
Ahh, level two. Where you literally get to see the sparks fly, or the little giblets of your enemies fly as well. I take The Scrappening because it’s good for waveclear (desperate times amirite) and works well with Ghalt’s slowing capabilities. Plus, it looks cool. And has the most consistent damge output of all three options at 3. A Little Somethin’ Extra is kinda better if you’re on a wider map, like Paradise or Monuments, and you have the time to place 4 scraptraps in different strategic spots, more on that later.

Level Three: Barrier
This option increases max shield by 240 and the recharge rate by 165.
A very helpful general increase to survivability. Pellet Party, on the other hand, just increases the spread of your shotgun and not the damage. Well, it technically does buff damage, but only by like six to ten points. It just isn’t worth it. It increases the amount of targets tagged but it still doesn’t hold up to the major increase to lifetime that comes with Barrier.

Level Four: Efficient Extraction
This option gives your hook 35% increased range and speed.
What makes Efficient Extraction so great is not its speed (as you can get used to the regular hook’s velocity) but its range boost. That 35% increase is enough to nab that annoying Marquis or Toby from across the field. Triple Hook is nice in all but has a critical flaw: if one hook finds a target, there’s a chance the other two will just disappear or stop entirely, which defeats the purpose of getting two targets. I don’t know if it’s a glitch, or if the other two hooks are supposed to stop and them not stopping is a bug, but the unreliability of this choice puts it off the table for me. Hookshot is a minor boost to your burst damage, and simply isn’t worth it compared to the utility of the other two options.

Level Five: Either
Hobbling Shot makes Tactical Shells slow enemies for 2 seconds. Boomstickier increases your M8-R’s damage by 15%.
This time, the helix depends on your team’s composition. Do you already have a bunch of CC? Just take Boomstickier. Do you not already have a bunch of CC? Just take Hobbling Shot. I prefer Hobbling Shot most of the time but this is a pretty disputed choice. I mean, 8 seconds of slow is pretty bliss regardless of how much CC your team already has… besides, Hobbling Shot helps you keep your enemies from running from The Scrappening’s bombs.

Level Six: Drain Chain
This option makes it so that when you hook a target, the said target takes 360 damage over three seconds.
+360 damage? Holy hooks of heaven, dude, that’s a lot! Meanwhile, Duct Tape and Boiling Wire is only useful if your scraptraps seem to get demolished instantly upon spawn. But it does have a handyman name, so ten points to Gryffindor, I guess.

Level Seven: Speedloader or Scrapstack
This option increases the reload speed of your M8-R by a whopping 25%.
Both Barrels Blazing is a bit clunky, and if IIRC, not very much of a DPS boost even if every shot of every pellet hits. It’s also considerably more difficult to hit shots with this choice, because the decreased attack speed and increased recoil. Recoil typically doesn’t matter for a character that doesn’t aim down sights, but the kick is so strong with Both Barrels Blazing that it’s kind of crazy. Speedloader is a solid pick because it’s handy for panic situations when you need to either shoot quickly or reload because yet again you pulled someone in with an empty magazine. Scrapstack is only worth it on larger maps, where there’s reasonable amount of room for multiple scraptraps. Also, it’s only worth taking A Little Somethin’ Extra at level two if you grab this option, because it’s the only way to make ALSE do more damage. But you’re better off just spamming scraptraps in-lane instead of being all strategerie about it. Speedloader might be boring, but it definitely works.

Level Eight: Quick and Dirty
This helix reduces the cooldown of your Scraptraps by a whopping 25%.
Dang, all three of these are good picks. Short Fuse turns your scraptraps into landmines, and Big Trap is like the Texas’d version of regular traps. But I take Quick and Dirty so I can really poop out traps like I just ate at Taco Bell and ate fifteen Fiber One Brownies, which are healthy and delicious treats and I highly recommend them.

Level Nine: Here Comes the Hook
This helix reduces the hook cooldown by a whopping 25%. Neither choices are bad here, but this option lets you synchronize your hook and trap deployment/cooldown times better.

With this build, your clear focus is to hook enemies into your scraptraps that you’ll be pumping out like every ten seconds, and melting them with that sweet trap damage. Speaking of trap damage, I’ll reiterate on the level two choices: Shocktrap adds 90 damage, A Little Somethin’ Extra (adds up to 40% extra, +10% for each scraptrap on the field ) can, if all four traps are deployed with the help of Scrapstack, have the most burst damage since you don’t have to worry about them running away; the initial explosion packs all of the punch and you don’t have to wait any longer. The Scrappening essentially doubles your Scraptrap damage, but that’s if all three hit.