Today I might have found the strongest Smasher in existence. I received a Hard Smasher as a loyalty reward for playing BL2 and it has these stats:

I started Gibbed and looked through this to find the source of this power. After a while I noticed, that the weapon is indeed a Jakobs pistol, but has Torgue as manufacturer.

I don’t know if this was already discovered, but the power of this thing is hilarious. The Maggie is nothing in comparison to it. Anybody else has this glitch?

Edit: Uploaded a picture of it.

I added a picture

does it stay the same when you restart the game? this is odd to say the least

Yes. Nothing strange happens, no lag or slowdowns, no errors. It’s a normal Smasher with insane damage. When Nisha wields this thing, the game is officially broken.

You bet on it. I just melted EOS in 1:23 with this weapon xD

what system are you on?

weird… it’s a totally different skin and everything… if it were handsome collection I could at least pretend it was something only they were getting.

Woah, Timmyjack could probably do some nutty things with it. Absurd accuracy, extremely high ammo saving chance… I really wanna see it in action!

Huh? The skin is the same like every other smasher i received until now.

I play it with Jack, CEO com with +6 in AA and +5 in Synergize. Wrecks everything, always around 15 shots until reload. Gamebreaking.

Apparently the skin was changed with the latest update for the Handsome Collection. This is how a Smasher looked like before: 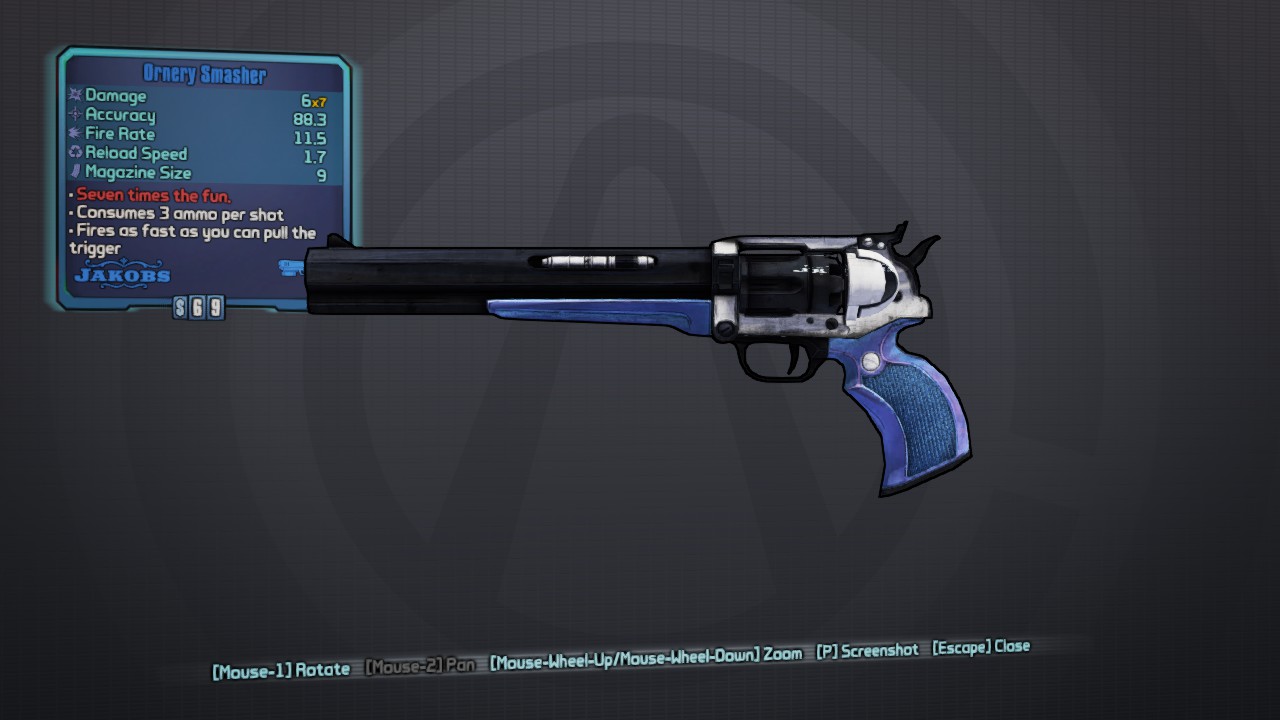 From the Borderlands wiki:

“The March 24th, 2015 patch changed the skin of this weapon. The barrel and grip where changed from a slightly dark blue to a really dark purple, and the body was changed from a light-bluish ivory color to a rusty gold and was given the Vault symbol.”

So it is this way since the new DLC was released.
I’m planning on doing a build guide for Smasher-Jack, though the problem is…I seem to be the only person who has this beast.

One thing for sure, it got a rather significant accuracy boost for a multiple pellet gun. The Hard prefix increases damage but nothing else, I wonder how the stats of the old Smasher would look like with that prefix on 70.

After I read all this, I think I got some one-of-a-kind glitch. Strange, still don’t know how it worked…

It’s around 1/6 the damage as this one