Glitched Weapons have better base stats than their Purple counterparts 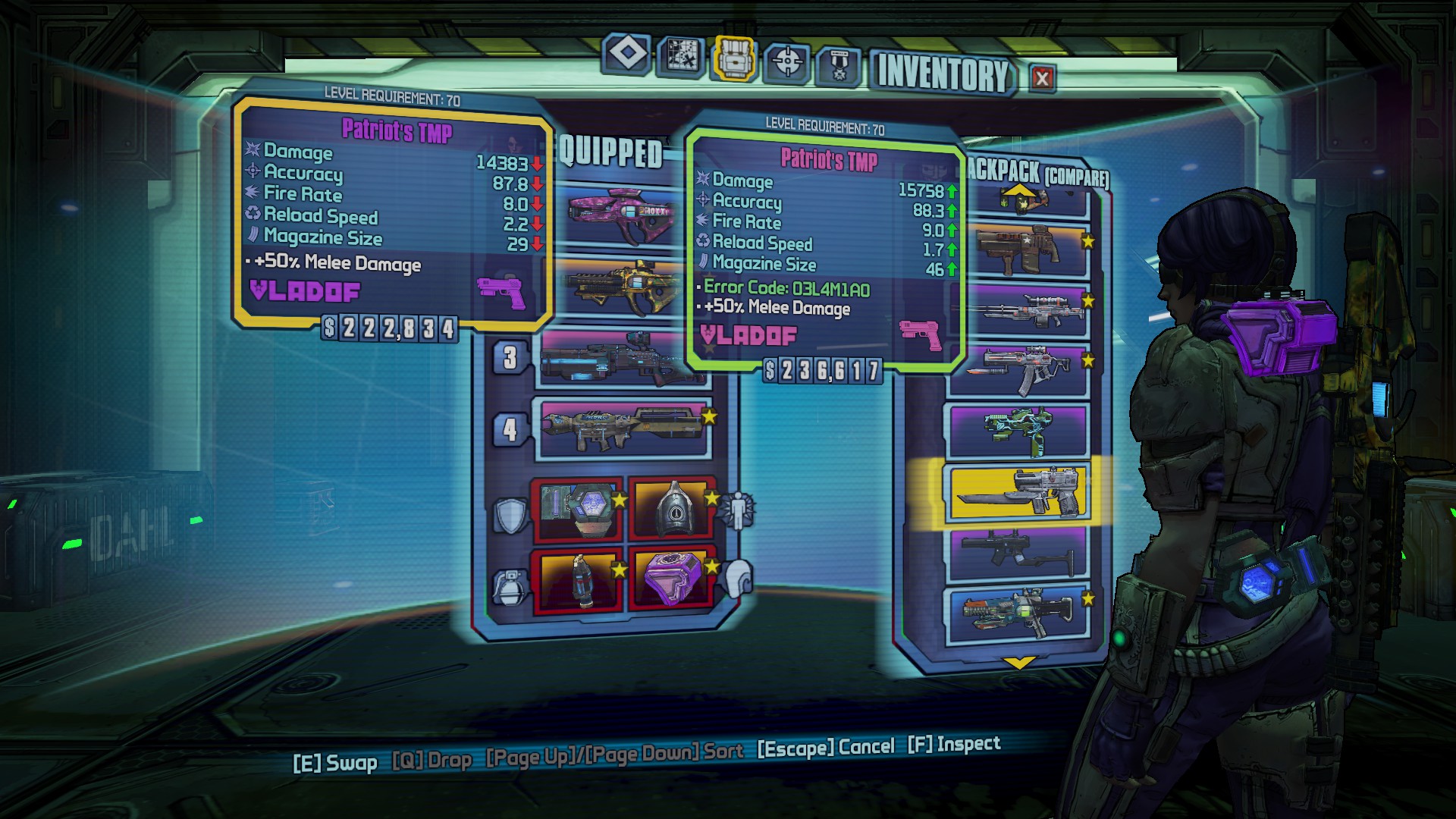 Yeah, they probably don’t have exactly the same parts, but it’s better in every single stat, so, even if you don’t get the glitched effect in a particular reload, it’s still a better weapon. 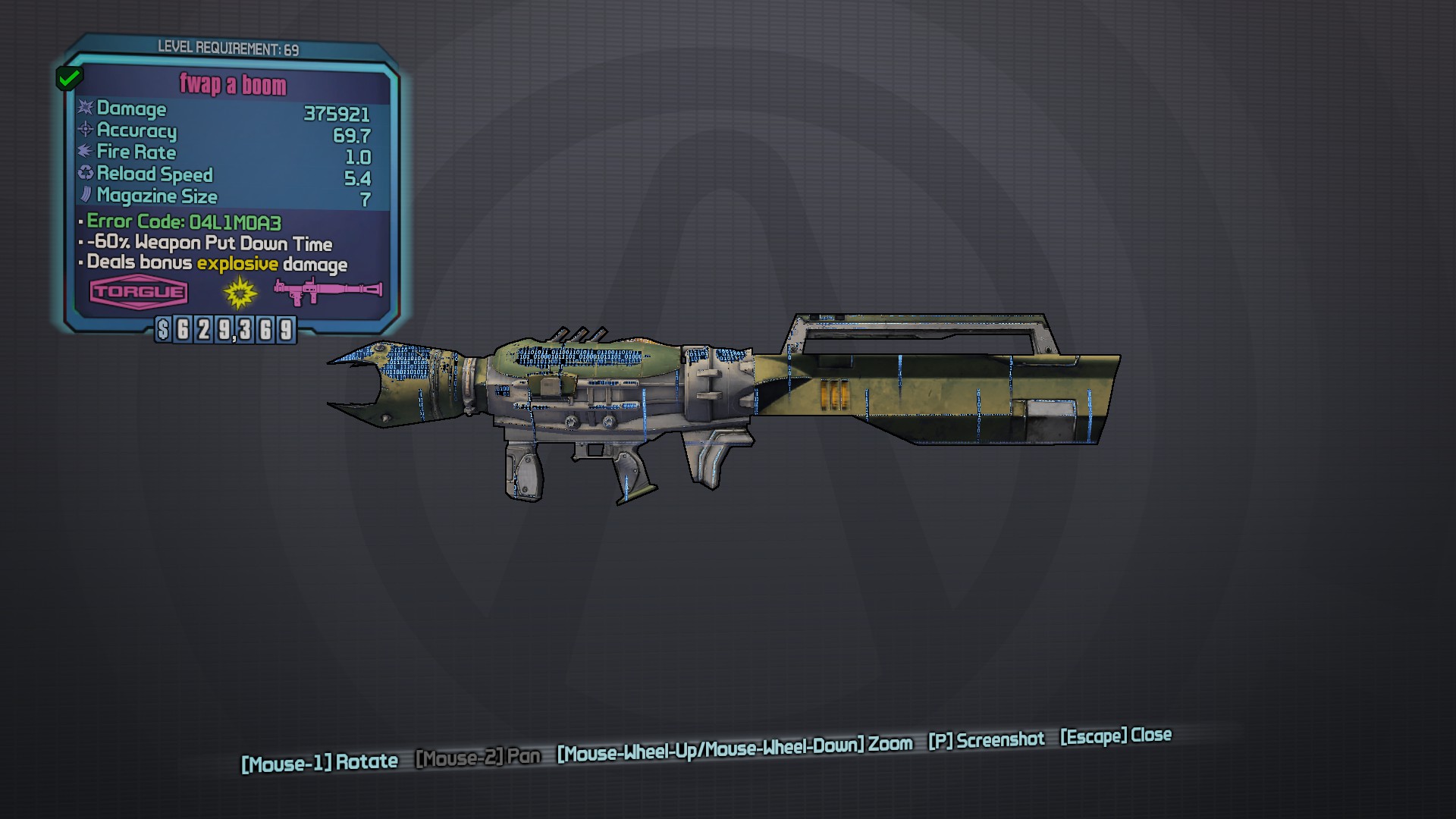 You would need identical parts to make an accurate comparison. Parts make a difference.

True, parts make a difference, but they should both increase and decrease random stats. I guess somebody could whip up the identical Purple and Glitched weapons in gibbed (on PC) to double check.

Could you post pictures of both guns separately ? I can’t even see one of the 2 guns from your picture.

Yes, the different parts should increase different stats, but matching either the grip or the barrel bring additional bonus on top. To further compound this, the TMP is the name this gun gets with 3 diffetent barrels.

For example, I can see that one of them has a Dahl grip, which increases accuracy and recoil recovery, but decreases damage.

The Vladof grip increases fire rate but decreases damage… But less than the Dahl grip does. Furthermore, a Vladof grip in this case gets the extra bonus for matching the gun manufacturer, which increases mag size and reload speed.

So compared to the Dahl-gripped one, a TMP with a Vladof grip would have:

Now just add a different barrel and the picture would be complete.

The only difference, part-for-part, of a Glitch Weapon and an identical Purple Weapon, is that Glitch guns have a 33% larger magazine.

Good info. It “feels” correct too, with my Torgue launcher example. I’ll take a pic of the Gltiched gun later (I no longer have the Purple one, but you can see it in the first pic for parts comparison). 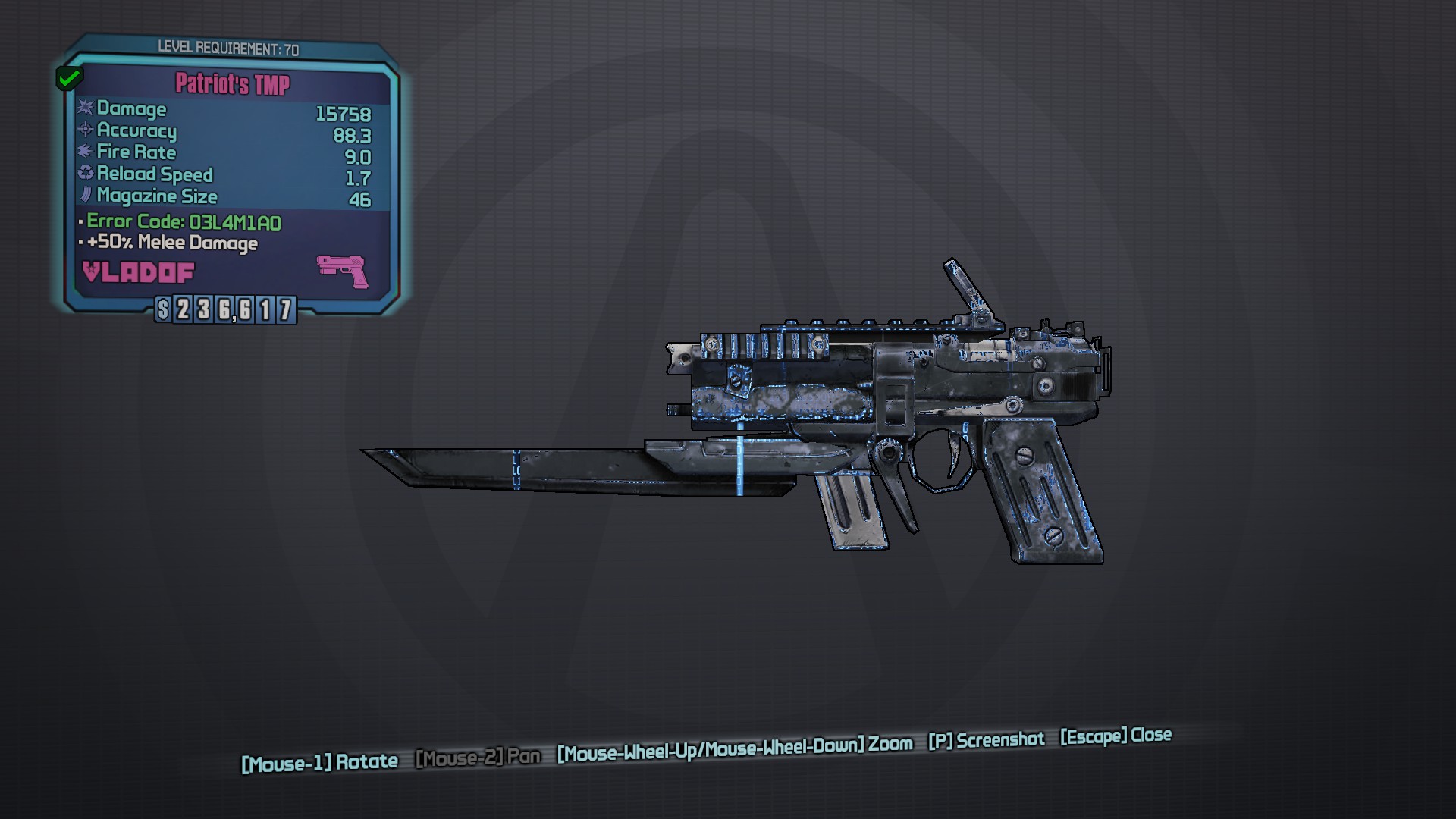 The second one (glitched) has a Scav barrel (Bandit in the picture above) and a Matching Vladof grip.

The Dahl Barrel increases accuracy, reduces damage and does a few things with recoil that we’re gonna ignore for this comparison since they don’t show up on the card

So we have a gun that should have slightly better accuracy, and lower damage.

The Vladof grip increases fire rate and lowers damage (as well as increased recoil, but you know…)
BUT!
Since the grip matches the manufacturer, the gun gets increased mag size and reload speed as well as a bonus.

… what it doesn’t explain is the ACCURACY

Not only is the Glitched gun more accurate, but it should be LESS accurate according to parts.

The difference is minimal, but it’s there…this is weird.

It could be the glitch, or something else entirely

Identical, all vladof parts with fire-rate accessory. Glitched gets a larger mag. That’s the only difference.

So the accuracy discrepancy must be coming from the Scav barrel.

The picture I used dates from BL2, maybe the stats changed a bit in TPS.

Could you compare 2 similar pistols, glitched and non-glitched with the Scav barrel ?

Each with a Scav barrel. I tried two with the Dahl barrel as well with the same result. I’d bet all barrels will result in the same thing: only a mag boost.

Yes, but now we know that the Scav barrel increases accuracy: it’s now 88 instead of the 87 it was.

Sorry. I thought this was about exact same parts producing different results between glitched and non-glitched. I think I need more coffee. Also the new forum is a confusing mess to use when it comes to replies to posts.

We were comparing 2 guns with different parts, and the only thing that I couldn’t explain was that one of the guns had a Scav barrel… Yet it had higher accuracy, even though according to our sources, it was supposed to have LESS. What you did was prove that our info source is now incorrect, and confirms that glitches don’t change stats except mag size.

I’ll check all barrels later if I have time but I’ll skip the screens and just report the finding.