After watching the last episode of The Colbert Report, I’m feeling kind of nostalgic. If you were a fan, post what your favorite segment of the show was. I personally loved the threatdown and laughed my face off at all the different ridiculous bear videos.

I have a tie for my favorite segements he’s ever done. The first was the superhero cartoon sketch he did of the KKK, because OH MY GOD I DIED LAUGHING.

The second is the bit he had done about the openly gay mayor in the small Kentucky town, mostly because I live in an area like that and my god it was nice to see someone celebrate the fact that appalachian folk aren’t all colossal dicks.

It is hard to pick a favorite segment.

One that comes to mind was Stephen and Jons Rally To Restore Sanity and/or Fear. Loved everything about that.

I thought Colbert and Stewart combining together to rip apart super packs was pretty amazing stuff.

So… why are you posting in this thread then?

On topic, I always enjoyed his Threatdown segments.

I also forgot about when he had Turkey vote to name a bridge after him, I think it was Turkey and when he had wiki change to say elephants were thriving.

In general my favorite stuff is when both the Colbert Report really used their influence to change things. I know its the Daily Show but when they had all the shows on the bill to pay the medical bills of 9/11 responders that were getting cancer and other terrible things from going in. A silly comedy show literally helped save lives and forced our government to do the right thing.

I really hope Colbert brings this way of doing things to The Late Show, with that audience combined with his army he could really do something great and make a network late night show really mean something. I look forward to him taking over.

You kinda proved his point, why come in and not only be nonconstructive but you are being disruptive in a really nice thread.

I’m testing the new forums, which I was relatively reluctant to do.

General Rules: Don’t be disruptive - This means no spamming, no trolling, no flaming, no inappropriate content, no platform wars, no backseat moderating, no racist, sexist, homophobic, or transphobic slurs, and other such behavior detrimental to conversation. It means that when you disagree with someone, you discuss your differences in a calm and civil manner and take the matter to private message should it begin to interfere with or derail conversation in the thread; that when others decide th…

Be constructive!- Instead of repeating a well-known meme, create or write something original! Avoid posting responses that don’t do much to further the conversation, especially if that response involves popular images or phrases. Talk about the games, not the other people: nothing spoils a thread more than personal comments about the people whose thoughts you disagree with or dislike. Please try to avoid hyperbole and exaggeration.

and yeah I know this might seem a bit hypocritical, I’m not trying to backseat mod here, just help point out the rules.

Testing out the new forums I think is great but you can do that constructively.

Understood, I agree I probably should not be trolling here.

Lets keep this thread in good standing for the Colbert Nation!!! 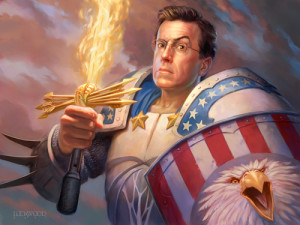 Michael Stipe on a shelf.

So whos Colbert…?
No seriusly no idea who it is, inform me.

Ah I have seen a bit of his show while browsing channels just didnt know his nsme, funny stuff.

The last episode was thursday.

I missed a lot of his recent shows due to work and life. I will make the time to go through his show one day. I only find myself watching John Oliver’s Last Week Tonight unfortunately, wish I had more free time.