Hope you are reading, your game rocks and your support rocks, so just hear me out.

Grog nozzle is such a central piece of equipment to many builds and yet its unobtainable aside from not finishing a quest, or playing the game 2 years ago on a specific day. I humbly suggest to make it a rare drop from gold golem again, or a quest reward like suggested in the patch thread.

An unobtainable item so powerful and game changing feels broken design. Thanks for the great game anyway 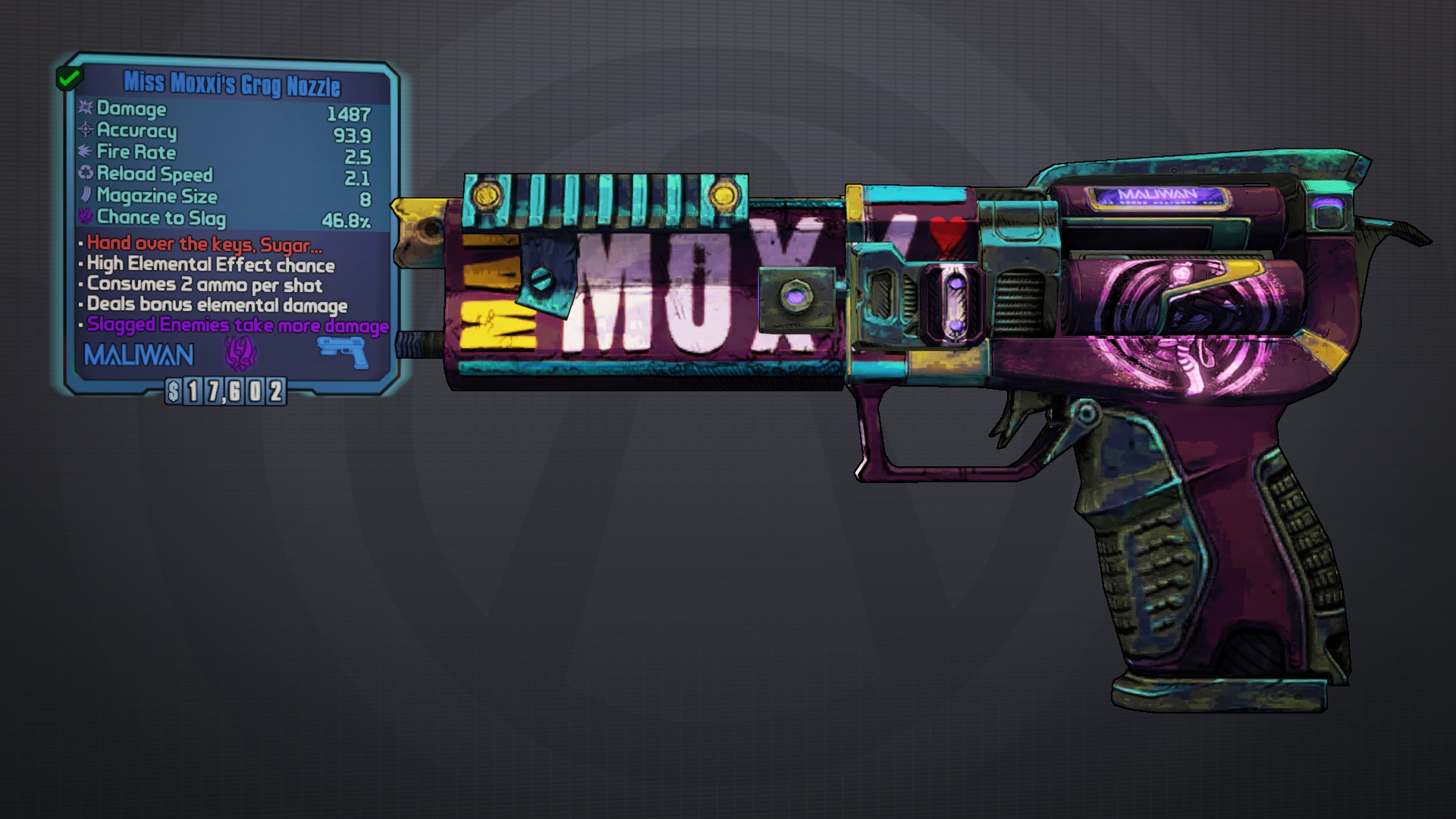 The Grog Nozzle is a unique pistol manufactured by Maliwan that appears in Tiny Tina's Assault on Dragon Keep. It is a mission-specific weapon available only during the mission The Beard Makes the Man, though it was lootable during the Borderlands 2...

Thanks but i know it. My issue is that it’s a quest item and you have to not finish a quest to keep it. And even then it changes after every save/load.

Or I should have been playing the game 2 years ago where it was a special drop for 1 day for some promotional event.

Try the trade section of the forum. Many people farmed a bunch of these during the loot hunt and may have a few left to spare.

After 2 years doubt any legit ones remain.

Try the trade section of the forum. Many people farmed a bunch of these during the loot hunt and may have a few left to spare.

I tried that too, but I guess I’ll dream of my Evisceration GN still for a long time…

Hang in there brother, that hope shines like a star for every melee player.

All failing another idea for developers: Make a new DLC, put grog as a regular drop and sell it for 100$ to victims like us

(Darn… should stop thinking out loud…)

I Have one if you’re on PS3

OMGWTHYARA !!!
(AKA : Oh My God What The Hell You Are Really Awesome)

I’m on steam but glad for Adrion54! Way to go brother, another soul saved!
Now, anyone to save me?

special drop for 1 day for some promotional event.

The event
"Starting October 12 2013, Gearbox began a contest dubbed ‘The Borderlands 2 $100,000 Loot Hunt’. The contest, going on for four weeks, was comprised of three essential parts per week: The Target, The Bounty, and The Goal. The Target for the day featured a 100% drop rate of a Bounty, with which players would have to kill a certain number of a specified enemy to complete the Community Goal. "

Got several Grogs that way, along with other hard to get or mission only guns, still have the grogs packed away somewhere, got them but never used them. not sure , but those from the loot hunt may be level specific, I do remember when I farmed the “Loot Hunt” I did so at several different levels. on 360, soon xbox 1

. not sure , but those from the loot hunt may be level specific,

They are. They are just like any other gun.

Anyway I feel it was a bad idea to put a %65 healing item in the game, quest item or not. They simply went overboard. So maybe back to dark souls for me, was playing a bit too much these days anyway…

Everything about the Grog Nozzle feels like a mistake.

The 65% healing
But also the 200% multiplicative crit bonus
And the incredibly high slag chance
And the fact that it’s a mission weapon
…have you ever fired a rocket launcher while drunk ? It’s a much better idea than what it sounds like in real life.

I wish they would nerf it. It can accomplish it’s purpose for the quest without the crit bonus and with just 5% healing.

I dislike the Grog on principle. So I roll with a level 50 Slag Evisceration Rubi that I swap between my OP toons as needed. Thank God melee accessories are independent of gun scaling.

Edit: I actually keep the Grog quest open, regardless of my dislike of the weapon. That way players joining my game have the option of using it. Same with the Torgue DLC quest that gives that sweet mission item shotty.

Don’t like it? Don’t use it. Why should everyone else have it taken away?

Because it’s broken and it wrecks the game’s intended diversity.

I’m saying that from a design point of view the Grog nozzle is a case of a badly designed item: it does too much and goes outside of it’s supposed goal. People are keeping this quest open because the Grog is just TOO good to pass up.

I use it…EVERYONE uses it…with every character… that’s a clear sign of an item that’s just unbalanced.

I think the game would be better without it.