Back in BL2, I made a little thread about how Gun Damage can be calculated, with the intent that the formula I gave could be used for any character. There are a few references to it in the TPS info threads so far, because there hasn’t been one for TPS yet. That changes today.

This thread will follow a generally “top-down” format, where we’ll begin with a condensed equation that looks really simple, but each term will have a number of calculations involved. I find the math is easier to do in stages (as is most math, actually), so this will help people who get panic attacks when they see more than two sets of parentheses.

Anyway. Math bits will be in quotes for easy scrolling, and terms in the Basic Equation will be color-coded and in BIG letters.

I’ve overhauled the formula from BL2 and made adjustments to make it easier to use and understand.

That’s the basic breakdown. Looks simple enough, right? Remember the order of operations: Parentheses, Exponents, Multiplication, Division, Addition, Subtraction. Or Please Excuse My Dear Aunt Sally. Moving on now, let’s define each of the terms to the right of the = in order they appear in the formula.

Easy. This term actually shows up again later. Note that Gun Damage, Weapon Damage, and bonuses to specific gun types (like Laser Damage) are generally the same thing, and all sources of these get added together. However, some things that increase Damage, Gun Damage, or Weapon Damage are “SpecMult” or Special Multipliers. Consult your individual Vault Hunter’s Gun Damage resource for more information.

Not every Vault Hunter has Special Multipliers, but for those that have more than one, they’re usually multiplied to each-other in this way. For example, Athena’s Tear and Omega-Senshu might give you 35% each against a bleeding enemy below 50% health for 1.35 * 1.35 = 1.8225 for your SpecMult value.

This one might be a little confusing. There are actually 3 different kinds of Critical Damage modifiers. There’s no way to tell which one is which by reading the text in-game, so it usually requires testing to make sense of it. Fortunately, Chuck80 has a very handy guide detailing which weapons and skills carry these and how much. Obviously this value only applies when scoring a Critical Hit, and in the case of multi-pellet weapons, only to the pellets that actually score a Critical Hit.

Ah, there’s that NormalHit term again. The reason this is sitting here is because Splash Damage doesn’t usually Crit. Nisha can score Critical Hits with it via Tombstone, so you would simply multiply SplashDamage by CriticalHit in that case.

Note that not all Splash Damage benefits from Grenade Damage bonuses. That’s why I put the question mark there. I’ll have another thread dedicated to Splash Damage in the near future that can further explain this, but for now I’ll say that for the most part, Torgue weapons that shoot the normal gyrojets (Slapper, Ravager, Spitter, etc) do get Grenade Damage bonuses on their splash, but most other weapons could go either way. When I get the thread up there’ll be a nice list for reference.

Also note that not all SpecMult (Special Multipliers) apply to Splash Damage, which is why that term shows up split between NormalHit and SplashDamage. The Splash Damage thread will also cover this.

Also also note that although NormalHit includes Amp Damage, sometimes it might not apply to your Splash damage. This isn’t really a function of the formula as much as it is a problem with the way Splash Damage is generated. Specifically, when the bullet hits the target, not when it leaves the barrel. This also causes issues with Claptraps’ One Last Thing skill.

This illustrates that “Elemental Damage” is added to “Shock Damage,” or “Explosive Damage,” for example. This mostly concerns Athena because Maelstrom boosts “Elemental Damage” while she can also get various boosts to specific element damage as well from gear and such. Note that Nisha’s skill Magnificent 6 is normal Gun Damage (from NormalHit) that only applies to Non-Elemental guns. It doesn’t go here.

FreezeBonus is 3 if the damage type you’re dealing is Explosive and the enemy has a Freeze DOT. Otherwise it doesn’t apply.

This is a multiplier that depends on whether you’re hitting Flesh, Armor, or Shield, as well as the specific damage type you’re dealing and the difficulty level you’re playing. Lucky for you, I have a table: 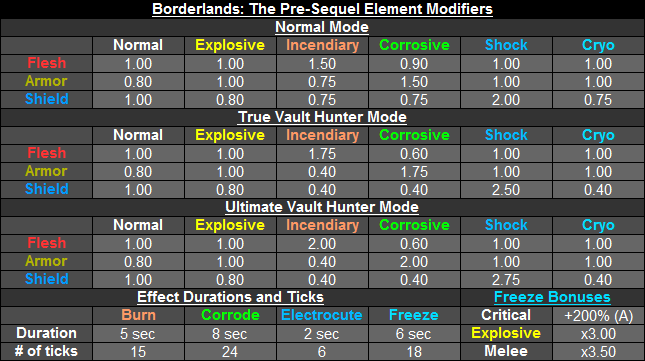 26 Likes
Multiplication vs additive damage
Weapons and turrets
Statistical questions (does certain bonuses stop applying after reaching 100%)
Class Mods for Jack the Doppelganger
The Community Salvador Guide - All you ever wanted to know
[Analysis] How useful is frostbite in UVHM? (Lvl 70 update)
Starting UVHM for the first time, need some help
Critical Hit Damage is Weird!
Pain is Power discussion
Is Borderlands 3 going to borrow from Destiny?
What did you do in TPS during your most recent session?
How does damage stacking work for a siren?
The Community Salvador Guide - All you ever wanted to know
DDD: Jack's skills for Bandits
Some help with Elemental Damage Bonus?
[Build] Jakobs Nisha - Level 70 with Eclipse/Eos Video
TPS Elemental Showdown - Best To Worst
[Build] The Cookie Cutter TorgueTrap (Lvl 70 DLC update)
Question about elemental guns and UVHM
Am I playing wrong?
Math and percentages with skills and items
Jack the Doppelganger's Damage Formula
How does shock and electrocute damage stack?
[DDD Guide] Understanding the Damage formula and how to Min/Max
Lootology 101 : The Pre-Sequel edition!
[DDD Guide] Understanding the Damage formula and how to Min/Max
Athena's Gun damage formula
Lootology 101 : The Pre-Sequel edition!
Many Things Are Geared Towards Amara. Other Vault Hunters Appear Under-cooked
[Guide] An Introduction to Borderlands Math
Max Stat Gear Lists
Toothpick Research
Toothpick Research
Top Gear for Athena the Gladiator
A few awkward skills from fl4k's skill trees
Better DPS......DPUH + Sheriff's Badge...or DPUH + Explosive Damage Relic
[Build] Automatic Nisha - Level 70 with Eclipse/Eos Video
New to Gunzerking any useful tips and stratgies?
Moneyshot doesn't affect Slow Hand?
Damage modifier question
Does the Bee amp buff any other damage?
How much do BAR stats really do?
How Do You Damage?
Sljm (Really, really, ridiculously good-looking) January 11, 2015, 6:45am #2

Fixed error with SpecMult, gave it its own definition section.

Fixed error with Base, Amp, and Gun Damage.

Added a note in SplashDamage section regarding Amp.

Nice work @Sljm! An instant star and like from me.

Added some colors, mostly on terms that needed definition or are referenced in more than one step.

This formula is for guns only.

I don’t know of any Grenades that don’t get a bonus from Grenade Damage.

Some non-grenade Splash Damage being boosted by Grenade Damage might be an “unintended feature.”

I would say 80% of splash damage from guns gets grenade buffs most of the ones that don’t also don’t have a pellet, flakker, too scoops, etc… But there are more like Maliwan snipers didn’t in bl2. Red text guns are hit or miss and pretty much all have to be tested.

Thank you so much for this guide. Amazing work.

rumour has it that Sljm was found in a crashed space ship as a baby and … is actually from planet Krypton.

It’s true, I heard there is a documentary being made bout @Sljm and me

I think they could have gotten someone better-looking than Ben Affleck to play Derch.

Henry Cavill is sufficiently good-looking, though.

I thought it would have been Stiller and Owens playing you guys.

That was more a parody than a documentary.

Any chance I might appear on that movie… and be portrayed by someone ELSE than Zack Galifianakis for once ?

I would like a cameo of me physically carrying Chuck, preferably just a random animal that has no business carrying people, like a wombat or a Capuchin Monkey, and if the film is Live Action i would prefer to be animated like a 1930s cartoon, we’ll Roger Rabbit that fker.

These are my demands.

Someone really does need to make Gearbox forums: The movie

Blut could be the villain, I can totally see Wilhem Dafoe playing him.

I just had DaFoe’s voice in my head going an about how the flakker is, always was, and will forever be, the only shotgun you’ll ever need.

Derch: “Blut What are you doing?”

Chuck: “The World needs you”

Hoyle: Random Undeterrmined Animal Noises, but in such a way that It sounds both confused and terrified

Someone needs to PhotoShop him playing Jesus and holding a flakker!