Just from my very limited time testing items, the ones that look promising are the Ionic Disruptor, Free Radical, Replay,Torrent, Kickcharger, Infernal Wish, Super Soldier, Heat Converter (currently can spawn with up to three points in Feature Creep instead of one), Critical Mass, and Death’s Blessing. Haven’t seen the Re-Volter in action yet.

Let me shoot this down immediately. Anything this com does Flare does better. Secondly no minigun build is a top build. This com joins green monster in being both niche and second best at its only niche.

Will have to double check but good chance the bonus adds to the minigun anoint which further buries its damage potential vs Flare.

I tested the Kickcharger on my heavy weapons build for Moze and it’s absolutely ludicrous: just breezed through True Maliwan Takedown and Wotan despite it being cryo. I re-rolled the anointment until I landed consecutive hits and it’s like Moze ripped off one of Bear’s railguns and is using it for herself. CH imho makes far more sense than 300/90 just because of how versatile and ammo-efficient it is in comparison to the ION Cannon.

So the Re-Volter apparently adds about 200% shock damage when it triggers, and seems to work like U-Rad in terms of damage. And the shield effect most likely works with the ASS anointment. If so, Zane definitely has a new toy and Fl4k and Amara are likely to get some good mileage out of it too.

Yes, ASS is possible and the 200% shock seems to be universal just like URAD and terror cryo, so it is added to everything you do.

Definitely going to try that

Dont know if it is the best place to ask but what is the difference of the generic ASA and the AS specific such as Iron Cub and Fade Away?

Afaik, non. Except 200 ASA is better than 100 FA. Fl4k have no specific anoints that are better than generic ones

It works with the ASS shield anointment. I’ve been using it on my Moze with Some for the Road.
It also provides other bonuses beside the 200% bonus shock damage, including a significant fire-rate buff (which is amazing for Torgue stickies).

I put up a video showing the ASS working (around the 1:15m mark) and at the very end you can see the difference between the fire-rate with and without the shield effect. (I know it’s not the best fight you’ll ever see.)

Considering this for the Thursday Update.

Don’t know if One Shottin’ Shield should remain on the list since there are Legendary shields that can spawn with triple amp parts. Also looking for input as to which anointments that were fixed recently should be added to the anointment list.

Amp on legendary shields applies only to one pellet, when purple amp boosts every pellet.

Only if the amp effect is the legendary effect.

Any amp shield that can triple roll works like a one shotter.

Ok, but still easier to farm than Old God which is now pretty impossible to get due to world drop nerf. Also it has better uptime, so definitely top gear.

Old God and Revolter can’t roll with triple amp. The Madcap can though. But a triple-amp Madcap isn’t necessarily better than a purple one-shotter.

Kickcharger, Free Radical and the shields are definitively TG. Dont know about the Torrent thou.

Fair point about the Torrent, but it might still be Honorable Mention material though. As long as the ammo consumption can be handled, it seems to be a notch above Second Cut.

Debating on whether or not to move Hustler to Honorable Mentions, as well as if any of the new grenades are worth mentioning.

@Aaron0000 Roisen and Craps are outperforming the Prompt Critical and Scoville? I’ve been away for some time now, the last content I played was DLC4 and back then Prompt Critical was the Torgue pistol.

I am seeing it in the Second Cut but for both Craps and Roisen to be in the TG meanwhile, dont know how good they are right now.

Craps and Roisen got buffed pretty significantly, while Scoville got a reduction in ammo cost but still isn’t the easiest thing to try to land crits with. Craps still does around 60% ~70% of the damage of the Prompt Critical without proccing the special effect of four extra projectiles. Roisens could be considered for Second Cut due to the projectile speed and spread of the projectiles, but it packs a punch. Here’s some pictures from Lootlemon for comparison; 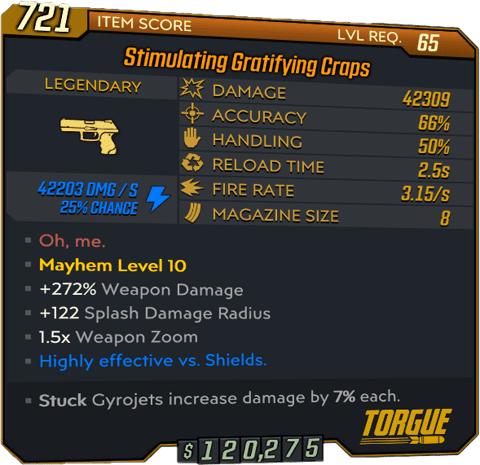 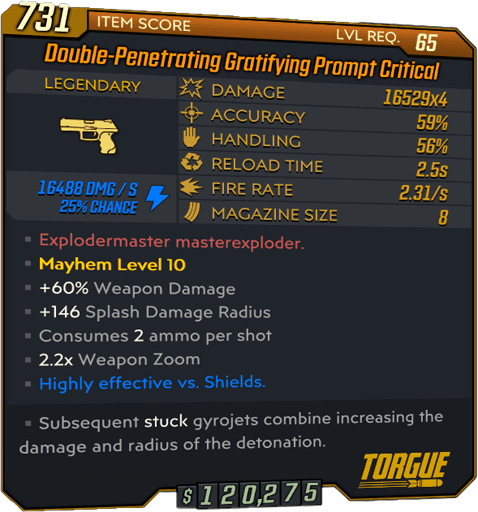 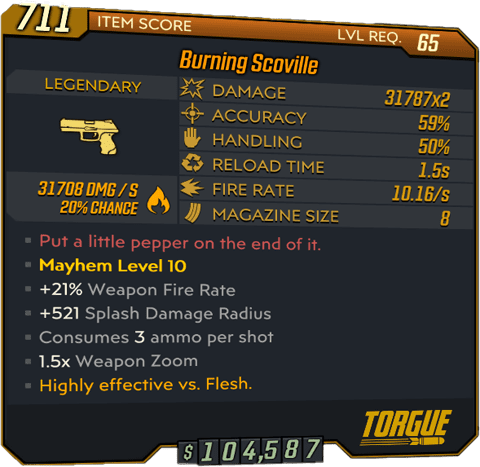 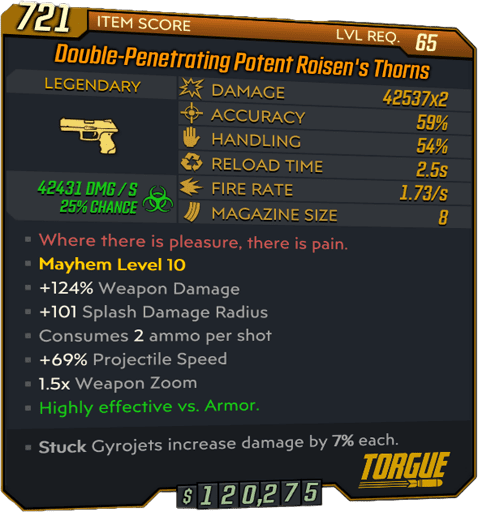