Hello. My name is Ron and I'm your local Hyperion representative 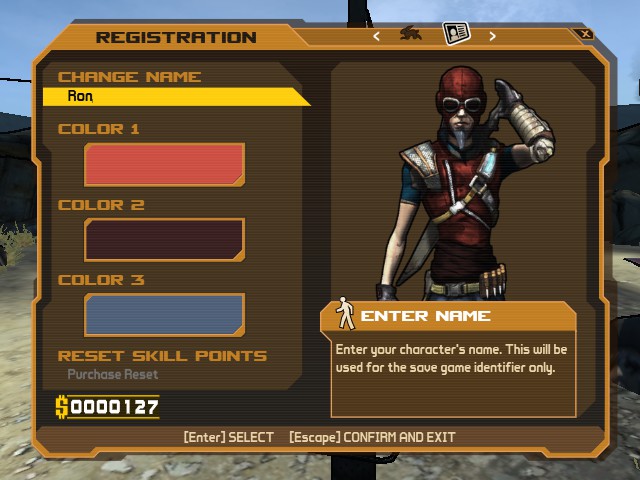 So, I’ve been sent to this barren rock the locals call Pandora by my superior to demonstrate the quality of Hyperion firearms…
While I would agree with the sentiment I’m officially here for, the underlying reason I’m here is much more petty and asinine than labeled. Short story shorter, always remember to secure your work station before your bosses’ son wanders in and handles your prototype weaponry. Prototypes that prove to be highly unstable and explosive. And hand removey…
Bad time all around. Good thing is, I hear the kid is getting some kickass prosthetics so I figure I did him a favor. ■■■■, I should have gotten a promotion for this.

All that aside, I’ve been dumped on this rock to showcase Hyperion merch until one of two things happen.
1: Something kills me. Sure, that’s a lot of things, but this list is more dramatic if I keep the listing somewhere below 100.
2: I cease to continue uploading these logs, whereby my boss will remote detonate the three explosives she had implanted into my spine. Of course, I could just be getting Snake Plissken’d, but I’m not about to gamble on that.

Ok, lets get this started.

With the shittiest example of Hyperion I’ve had chance to lay my eyes upon. 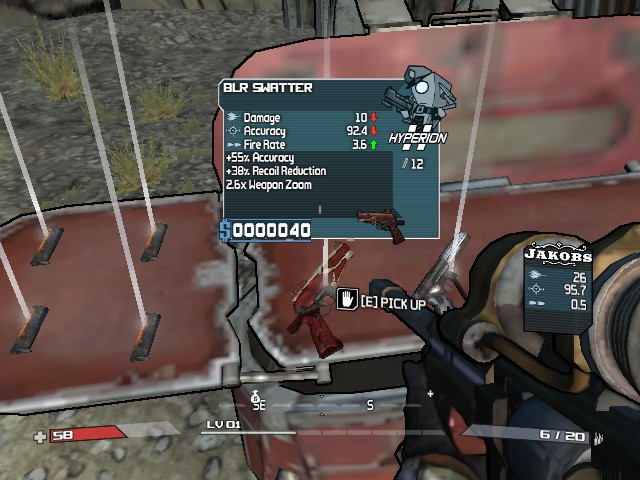 If this is the sort of thing I’m going to continue to find, I doubt I’ll be around much longer. As is, still better than this Jakobs piece of trash. 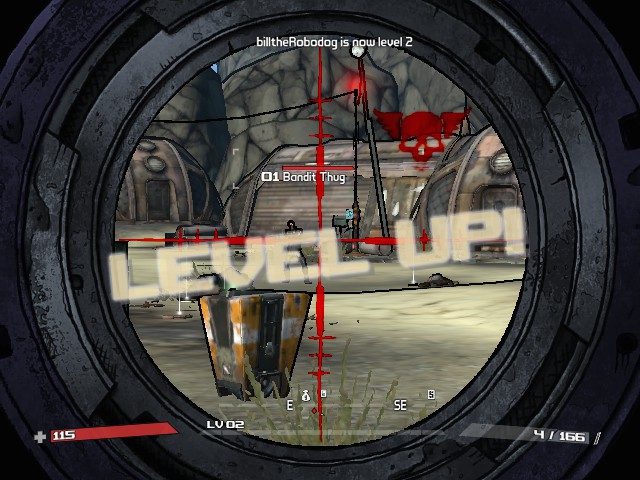 I don’t know what just happened, but this feels exhilarating! Kinda feeling I could tear the hands off of an eight year old! 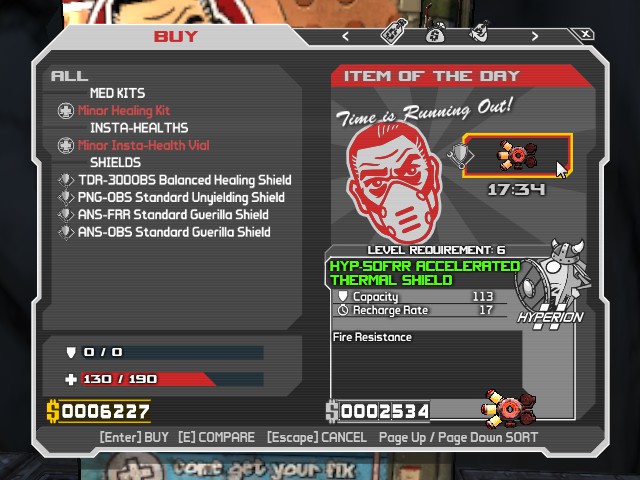 My first shield. Nothing much to say about it. Well, other than the fact that Hyperion focuses on keeping people from not burning to death very easily compared to other companies. You’d be surprised how well that simple pitch sells these things. 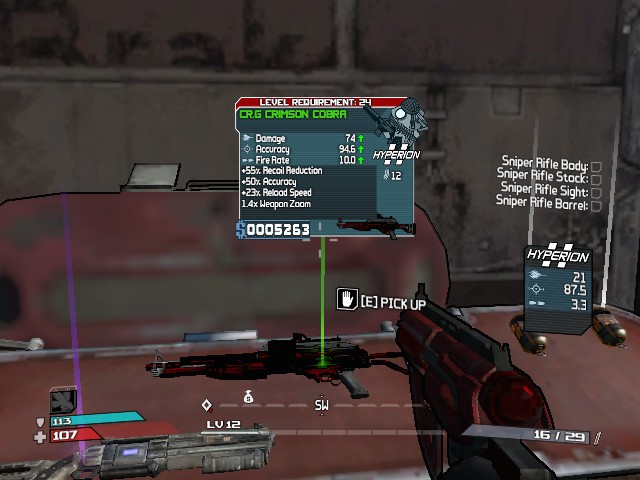 One of Hyperion’s fine combat rifles. I’ve found these are excellent for coloring within the lines, and appeasing your boss so she doesn’t have your spine become out of the lines. 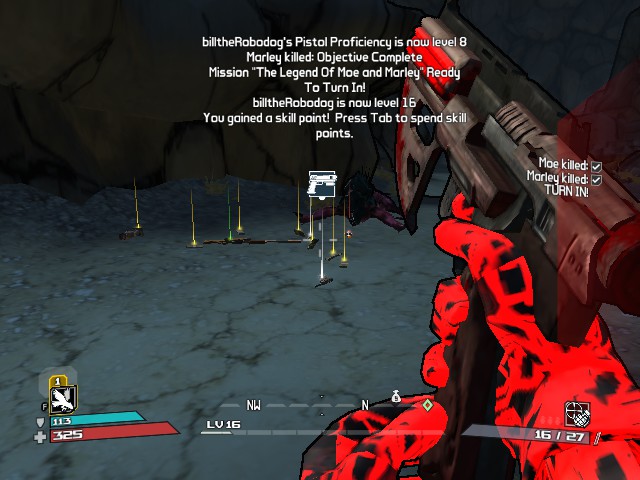 I haven’t really talked about it much, but this place is absolutely insane. I’ve mostly focused on what I’ve been using to take the life out of these monsters, but there’s really something to be said about the anomalies of nature that exist in this place. This place takes things like one-armed bandits and gives them axes talller than me. This place gives bandits a swimming pool’s worth of Batshark testosterone for their water supply. This place feels its a good idea to glue armor onto a fire breathing beast with rabies, and give it’s brother(do these things even have feelings of family?) the same treatment while its insides are apparently made of shag carpet and ballons, cause I can’t think of how else it’s throwing balls of electricity at me.
The hell, Pandora.

Also, quick note to Hyperion.
GIVE ME SOMETHING OTHER THAN PISTOLS. 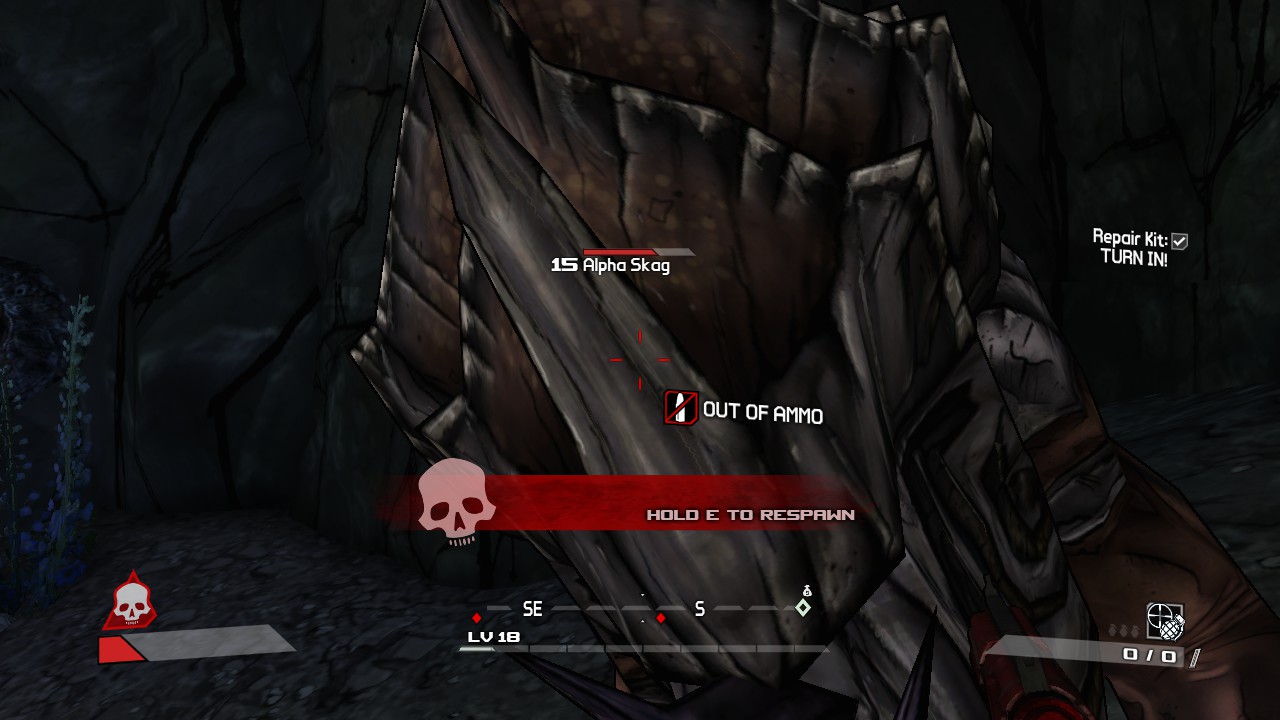 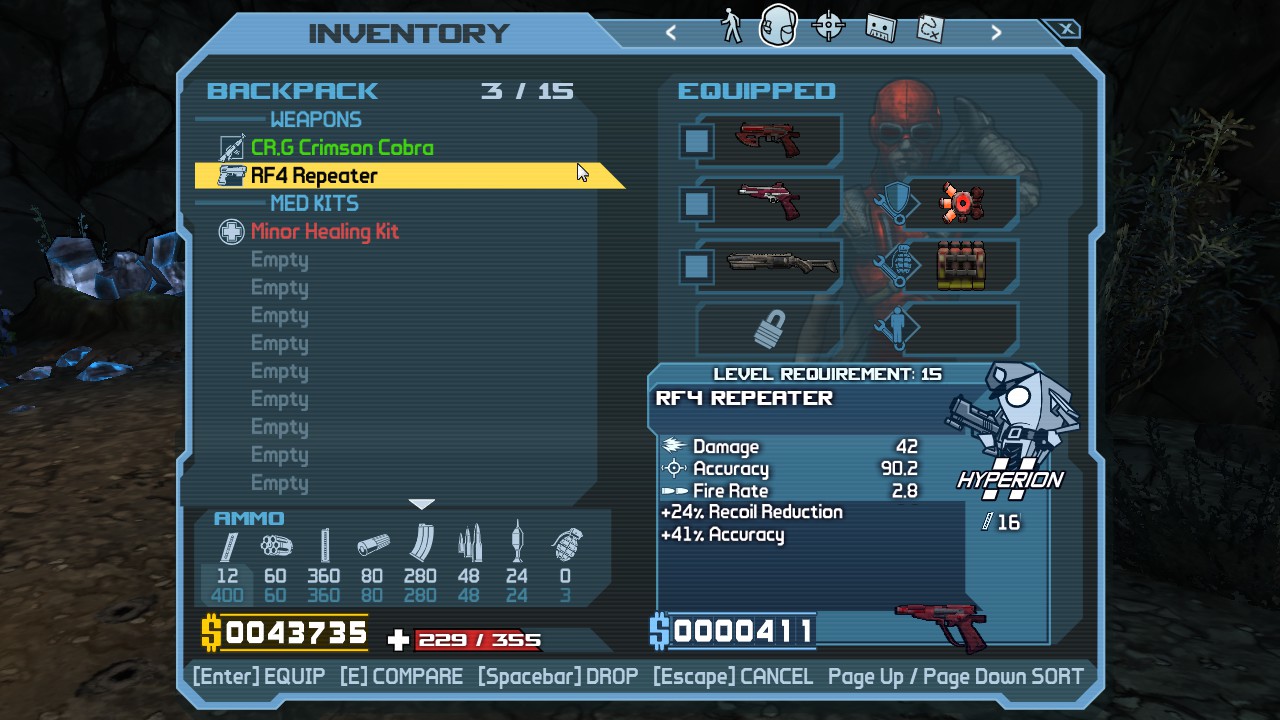 All I can say is good luck. Probably the hardest loyalty type play through in my opinion. One day I’ll try to finish it. Not today though.

Things that happen when I don’t update in too long.
1: I find out my spinal implants double as electric shock nodes.
2: My boss is fluent in morse code. I didn’t even know what that was until I echoed it.
3: When applied in the right spots, she’s able to get me to do something called "twerk"ing with the phrase “Swim like a newborn duffel.”

Anyway, for the sake of a few hours of rest, here’s some of the instruments I was able to find lately(ish).

At last, something that doesn’t use pistol rounds, and I got lucky with the fire flavor.

WHAT DO THEY FEED THESE PEOPLE ON THIS PLANET. ARE THESE EVEN HUMANS?

Now that I don’t have to conserve every single one of my pistol rounds, I can choose to get rid of them all in a matter of 38 seconds.

The “I can’t wait until I get to level 24” list lengthens.

Finally, a weapon that can truly exemplifies Hyperion’s true value. Accuracy over all.

This proved to be very useful down the road.

I’m starting to suspect that my feelings of surprise will fade into a deep pit where emotions go to die.

I could complain about not having a corrosive gun, but +6 in skills is more than what I had.

Anyway, hopefully this post will let me get a few hours of rest.

YO. Bill here, just an update to this thread. Geez, it’s been, what? 4 months? Pretty sure Ron would be a paraplegic by now having no spine anymore, but HEY LET’S JUST FORGET THAT WHOOPS. Earlier today I had planned to actually update this thread, and then realized I had goofed up on steam and lost many of my un-uploaded screenshots again(this happens a lot with me). SO. What I’m going to do later today is take pics of what Ron has with him and you haven’t seen yet and actually say that I’ll attempt to try to be more regular about this.

Being entirely honest, you’ll end up seeing the same sort of pics as if I hadn’t lost them in the first place, as I wasn’t ever good at taking pictures of interesting moments or creatures that Ron would react to. Something to work on in the future.

Hey out there, to all of you mentally insane, fully sadistic, backstabbing marrow eaters, dog food connoisseurs, and parents of frog spawn. And to the rest of you guys out there who don’t fall under the descriptions I use to label my boss.

So, the .5 of you out there who actually care about what’s been up on my side and have been wondering where I’ve been, I’d say blame whatever service out there that hosts this excuse for a sales pitch. But also to not do that, as then the only company that owns the Echonet will come down on you like a solar mirror-arrayed laser. Which is actually what happens. I should know as I headed one of their facilities on contract for a few months.

Anyway, a lot actually has happened on my side of hell. I killed a bunch of skags, wasted a bandit leader or two(or three(fine it was more like 5(ok maybe more, look I lost count after 5))), melted a high ranking Crimson Lance in the most literal sense, snapped a bunch of twiggy aliens in half, and starred in a tentacle porn. On a sidenote, I was declared emotionally dead by a physical surgeon who lost his license who knows how long ago. Well, almost dead, he said I did show emotion on a few subjects we talked about.
What? You thought I’d tell you just like that? No, I only talk about my feelings to people I pay and have no emotional connection to. It’s worked out well for me so far.


?interpolation=lanczos-none&amp;output-format=jpeg&amp;output-quality=95&amp;fit=inside%7C1024:576&amp;composite-to=*,*%7C1024:576&amp;background-color=black1024×576
If I ever get off this rock I’m going to find the man who put a blade on a Hyperion. I can hear them right now “Well what if they get close hurr huuur?”
IDIOT. WE’RE HYPERION. IF YOU DESIGNED THE GUN CORRECTLY IN THE FIRST PLACE THEY WOULDN’T BE ABLE TO GET CLOSE IN THE FIRST PLACE.
?interpolation=lanczos-none&amp;output-format=jpeg&amp;output-quality=95&amp;fit=inside%7C1024:576&amp;composite-to=*,*%7C1024:576&amp;background-color=black1024×576

What more can I say? It shoots rockets. Hm. Well, I guess one bonus a launcher holds over other conventional weaponry is you can’t hear the screaming over the explosions. Titanium linings people, titanium linings.

Ok, I know I just vented a bit about designing Hyperion weaponry with close range encounters in mind so I should probably recite the Hyperion shotgun sales pitch to you.
“Other companies say three’s a crowd, but we at Hyperion feel fine in highly social situations up to numbers of seven! Why tire out your trigger finger when you can get some real “facetime” with seven other business partners in just ONE pull of the trigger?”
Yep. Multiple headshot happiness with the smallest amount of physical exertion, ladies and gentlemen. You’re really missing out. 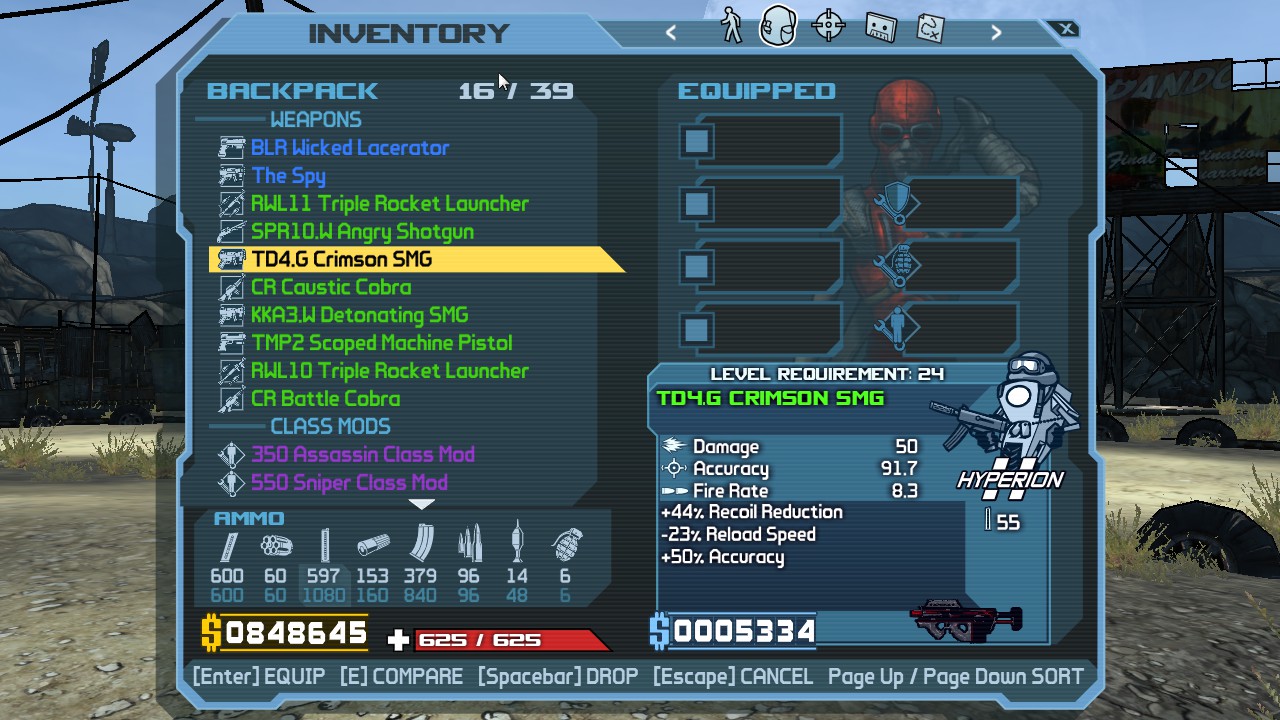 I don’t have a sales pitch for everything, boss. I was in weapons design, not marketing! 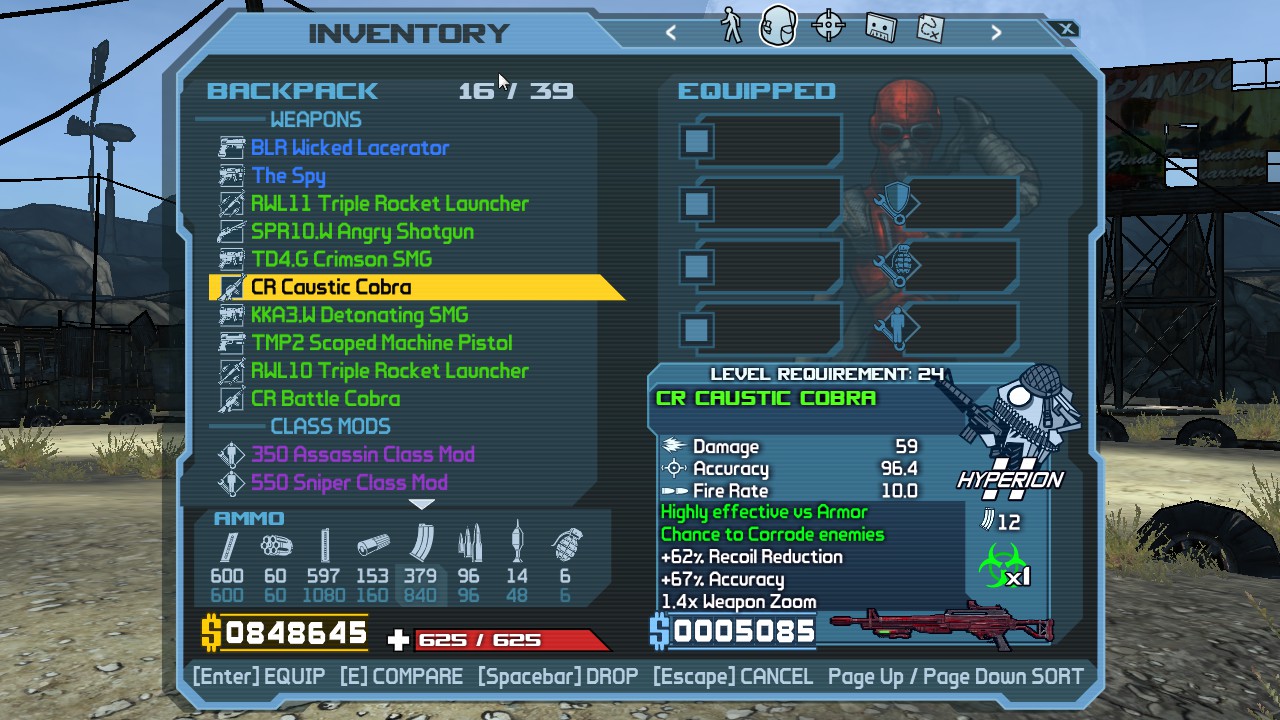 Did you know the acids Hyperion uses are sourced from the extinct Aquator Manatee? Strangely enough, the creature is nothing like the creature it was named after. Looks like a grumpy dolphin until it pulls out its recessed crab claws. Scientists are unsure how many exist in the universe, as they can’t find any. Which makes sense, it’s not as if they’d be allowed in any of Hyperion’s top research labs. 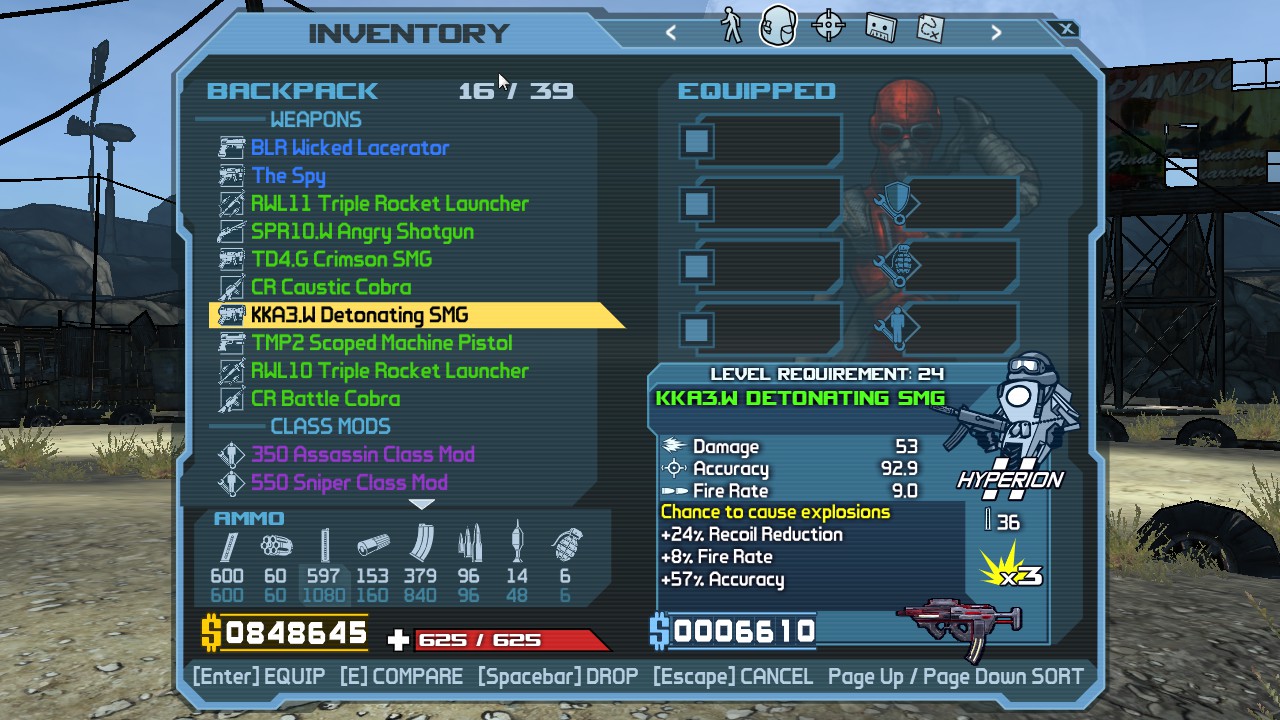 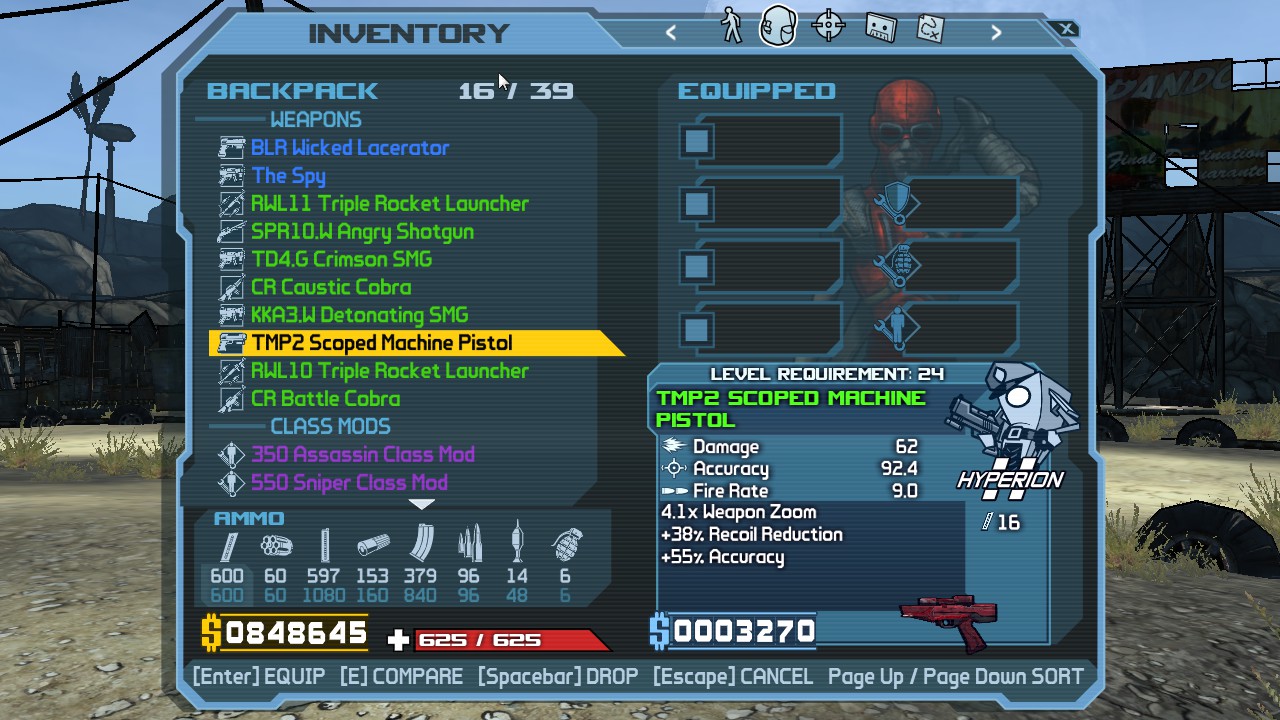 Scopes, whatever. If the only “interesting” feature to mention about a weapon is that it has a scope, you done goofed. I mean, not as bad as I goofed but hey, at least I’m able to feel proud of my work, ok? 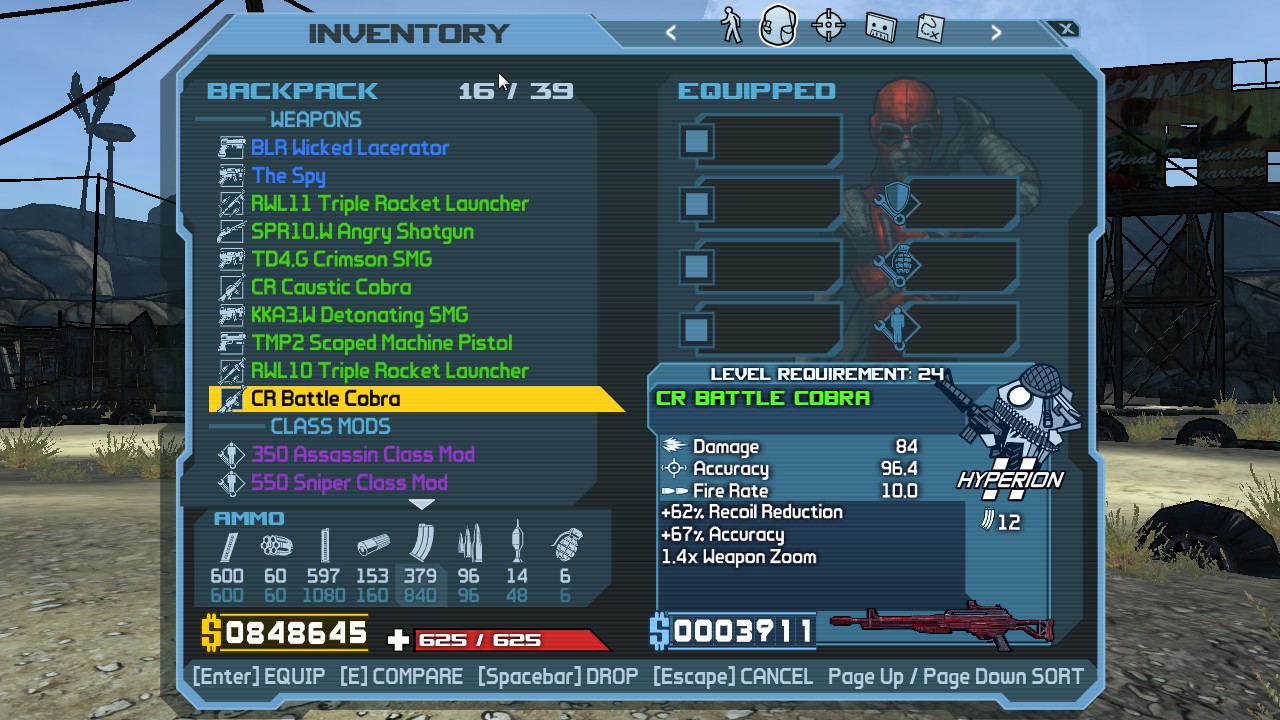 Even though it hits a little harder than the corrosive variant I have, this has been gathering dust more than anything else. Reason for that I’ll talk about later. 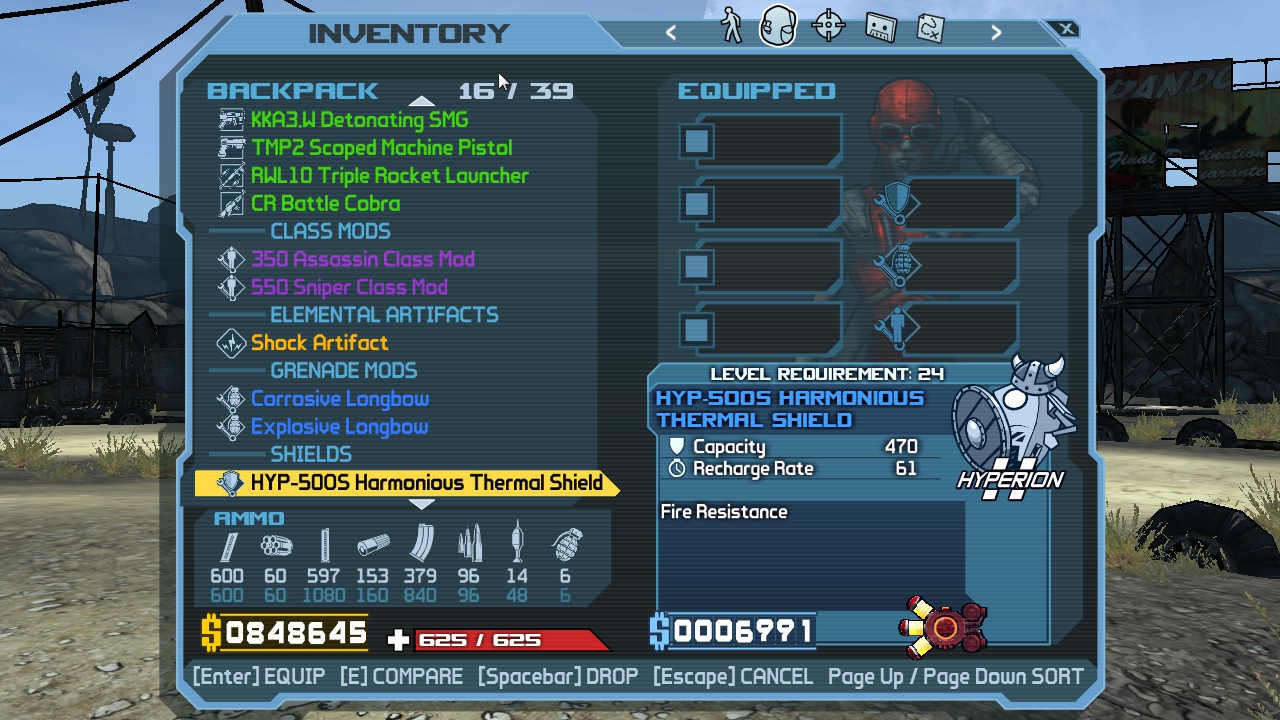 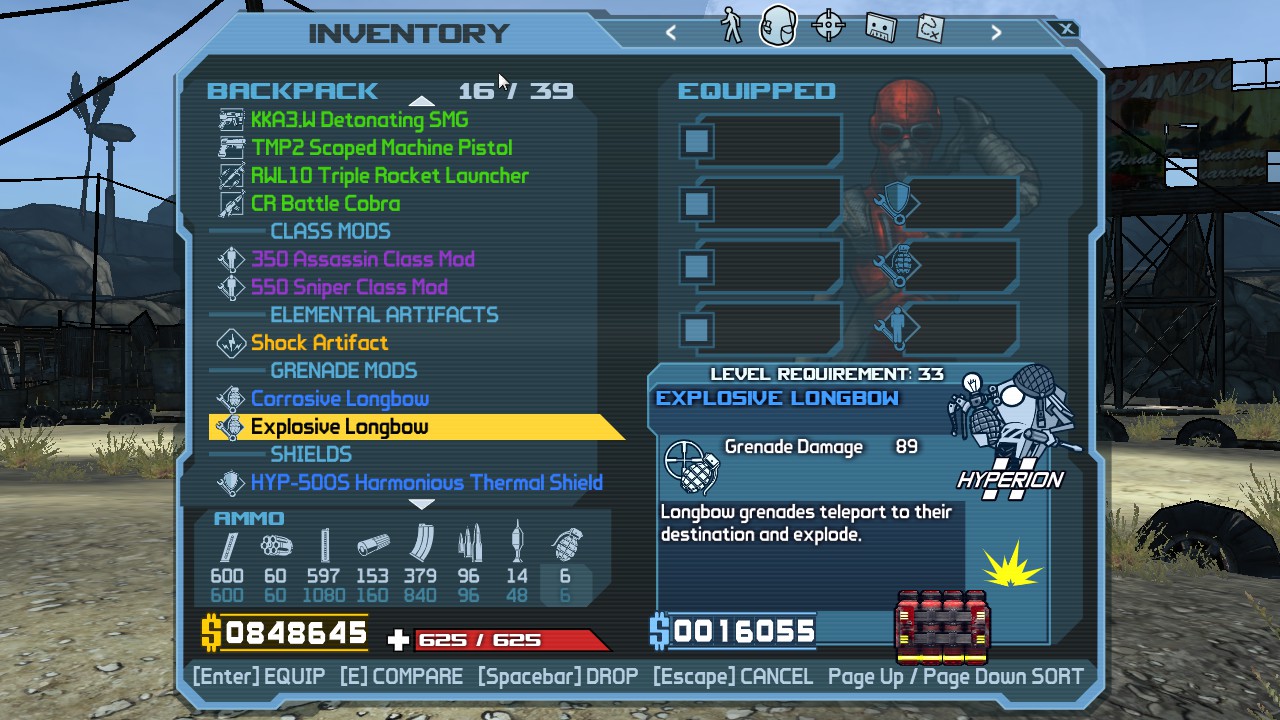 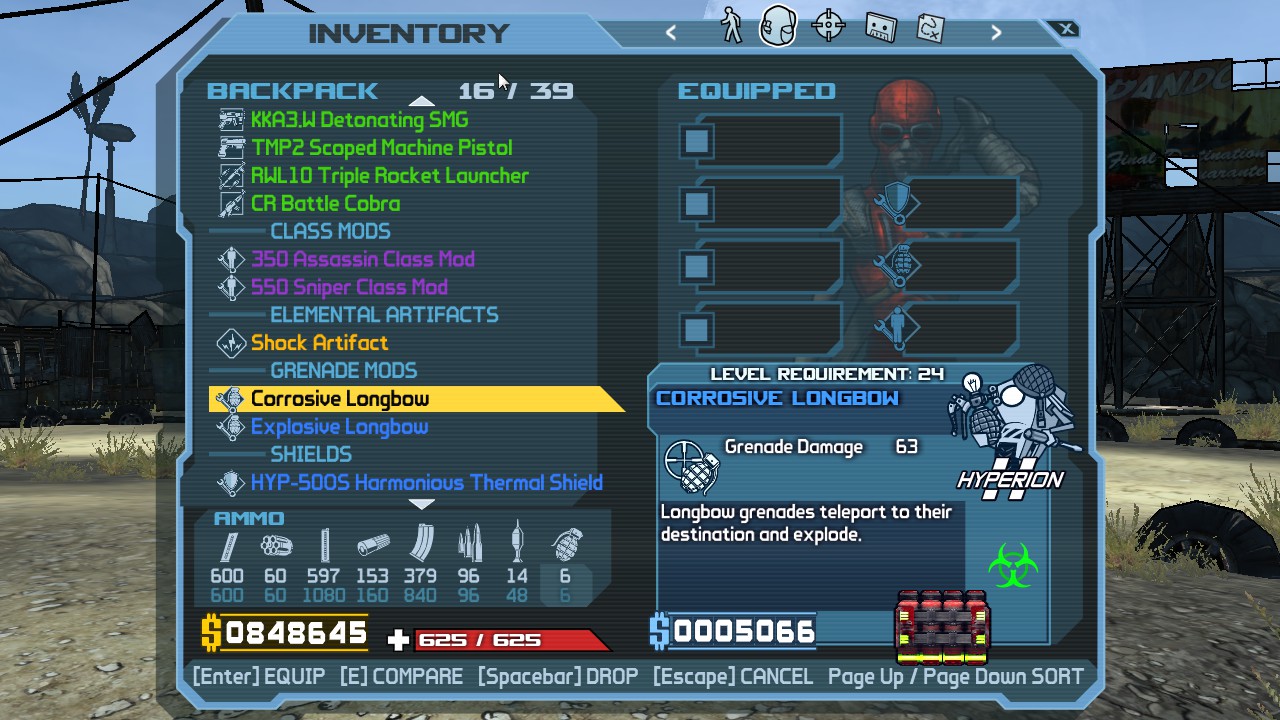 Not a lot to say, everybody knows about Longbow grenades after that baseball game/assassination. I’ve been using the corrosive one over the vanilla one because of… 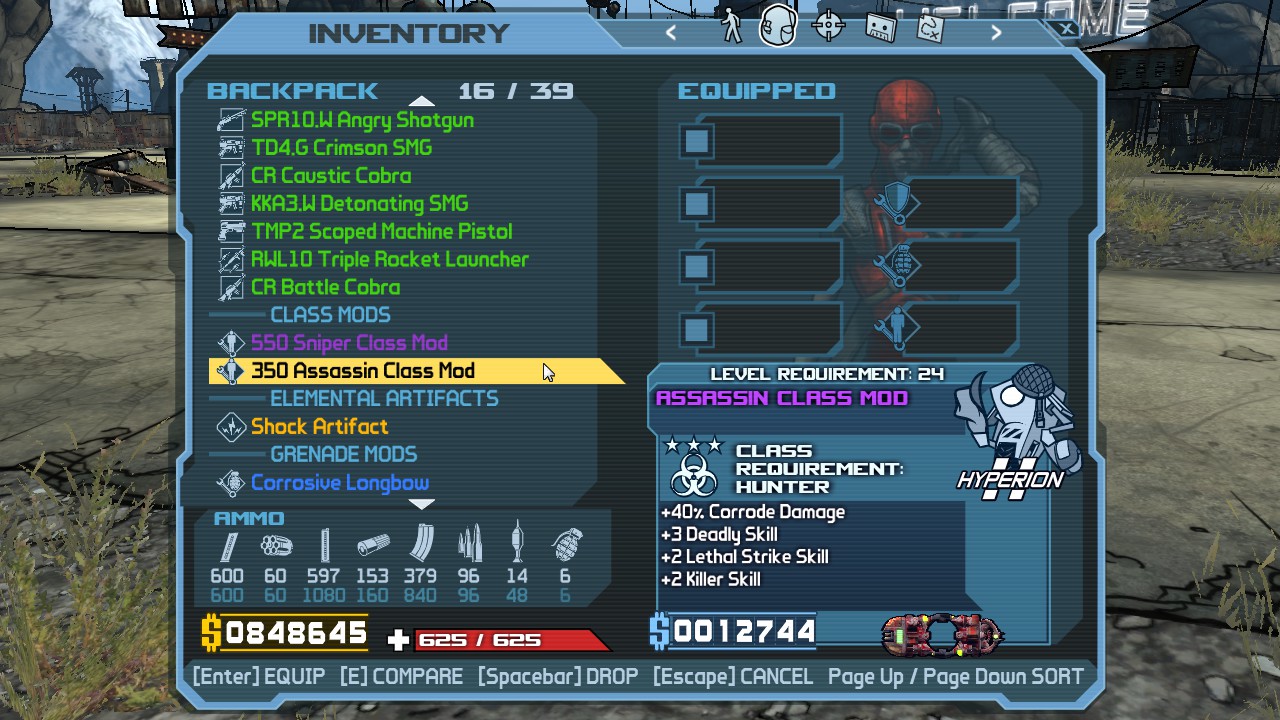 This. It’s not all that much of a difference to what I had before, but I feel like I should at least throw a mention it’s way. This hip decoration has helped me get through so many situations it… well, I’d probably be dead by now without it.
Ok, moving on. 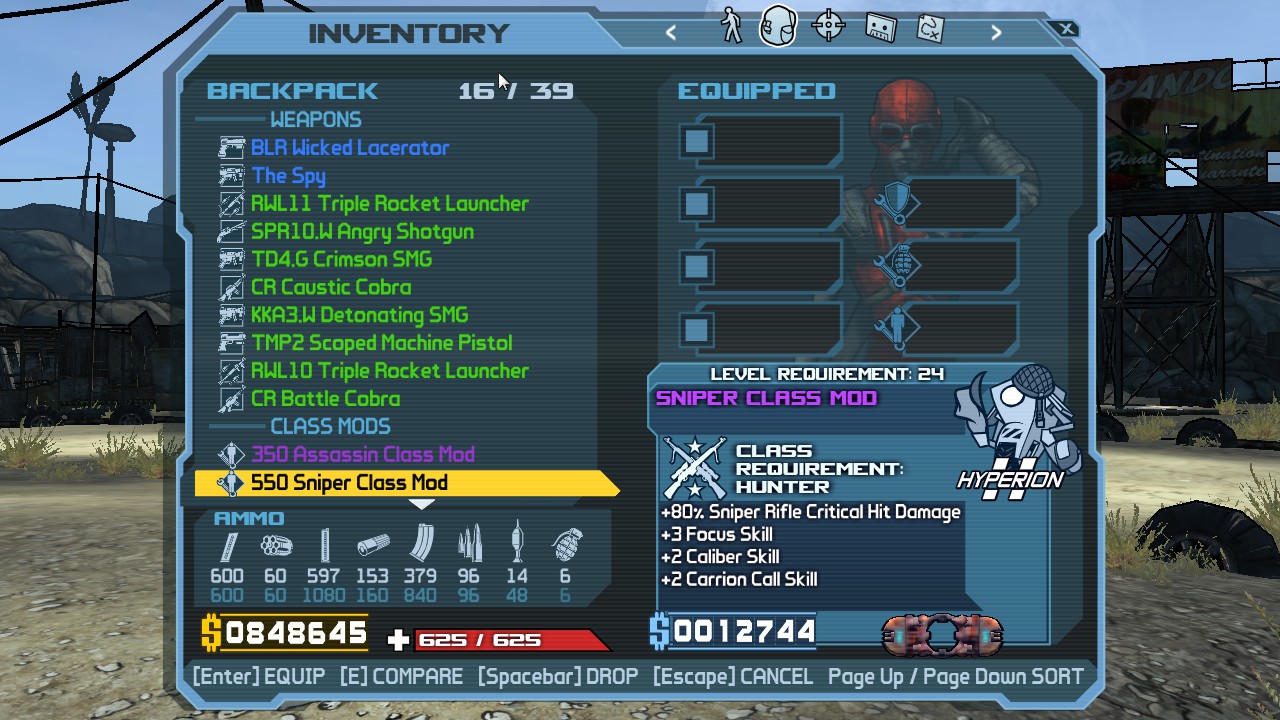 Well, that’s all what I’ve been using lately. Not a lot has happened since I destroyed the Destr-- yeah I’m not finishing that sentence. Eh, just been hanging around New Haven. Been asking Marcus if he has gotten any snipers inHUUUUUUHHHHHhhi’mcoolbecoolron but nothing yet.

Considering he holds a monopoly over this entire planet you’d think at least one would show up. Feh, who am I kidding? Nobody on this dried turd would be able to afford one in the first place, and if anybody did manage to get their grubby little paws on one… well, it probably isn’t leaving their use any time soon. They’re rare and expensive for a good reason.

I’ll admit, I’m getting bored. Nothing much is happening. Nothing is trying to kill me anymore… Everybody around has learned to avoid me by now.

I just wish I had something to do…