Helping all people to op8

for the past week now i’ve been helping various different players to get to op8 form level 72 to op8 in less than 45 minutes. I now want to help the vast majority of you who are struggling to get there. I know how much of a grind it can be trying to do it by yourselfs or relying on others.

I’m on roughly 6 days of the week for a few hours a day.

All i ask for in return is for you to look at my brand new youtube channel only been active 6 days and sub so you lot can get some brand new borderlands 2 content in 60fps to the fans! and leave a comment on what content you would like to see. I’m looking at doing an uncommon weapon vs bosses series. should be fun!

thanks guys you will find my psn on my channel!

Just a gaming channel for all the casual laid back gamers out there who are looking for tips and tricks and just want to play with other casual gamers!

45 mins? I dont think that gearbox allow glitching in their forums :S. But I will sub

. I appreciate you trying to help people on the forums, that is always good to see.

Thanks for the reply, I wouldn’t call it glitch in myself I turn privacy into offline as soon as I reach the boss I turn it to friends only invite the people kill it then repeat. So they can carry on with their own doing .

I appreciate the support

It must take you quite a while to get to last boss though? Running through the raid takes at least 15 - 20 mins

This can be legitimately done via “Rocket Jumping” and takes about 1 minute to get to the last Boss, since you basically skip everything else. OP8 Sal with appropriate spec and gear can solo kill the last Boss without issue. However, this only works for OP levels 5+. So, you would have to do a “full run” for OP1 - OP5 and then use the “Rocket Jump” method for OP5+.

That is not legit. The game wants you to go round that whole map, you go round the whole map. Any other way is not going to be approved by gearbox so what your talking about is an exploit/glitch.

We had this discussion in the old gearbox forums and @Psychichazard confirmed that “Rocket Jumping” was an allowed topic for discussion, since it does not require the use of any third party software or utility, modification of any files or going outside the boundary of the map (which you were originally able to do until GBX patched that out.). All that is required is the proper equipment and spec for Sal. So No, it is not considered to be a glitch / exploit. I am currently trying to find that thread in the old forums but not having much luck searching the old forums.

Your twisting my words lol. I didnt say rocket jumping is glitching/exploiting, i said that rocket jumping to the final boss of the raid on digistruct peak was. I completely understand as I have a gunzerker with sham and badabooms and i rocket jump all the time. But using it to access an area which you shouldn’t be allowed to reach and skipping out all the other parts of the raid, in my opinion is exploiting and glitching.

What is your opinion -aka what you consider to be exploiting / glitching (which you are certainly entitled to) and what GBX considers exploiting / glitching is not the same thing. As I stated previously, we had this discussion in the old forums (specifically Rocket Jumping and Digistruct Peak) and the thread did not get locked, since no third party utility / software, modification of files or going outside the map boundary is involved. Sal can access the area legitimately (thru Rocket Jumping), whether you should be able to or not. Granted, some might consider this a somewhat “cheap” method of getting from OP5 to OP8 but GBX does not consider it an exploit / glitch.

I don’t understand how it can be legit at all. Now to my understanding lets say an OP 1 player joins and OP 5 - 8 players game. If the OP 5 - 8 player does this skipping feature and kills the last boss. The OP 1 player would surely be leveled to OP 2, so this is not just for OP 5 - 8. A player can be leveled to OP 8 from OP 0. Gearbox cant possibly think that this is OK for players to do this. Anyway, the way i see it is the objective marker has specific locations as to where to go and the objective says ‘kill more enemies’ which is plural not singular. It then says ‘Kill even more enemies’.

I don’t understand how it can be legit at all. Now to my understanding lets say an OP 1 player joins and OP 5 - 8 players game. If the OP 5 - 8 player does this skipping feature and kills the last boss. The OP 1 player would surely be leveled to OP 2, so this is not just for OP 5 - 8. A player can be leveled to OP 8 from OP 0. Gearbox cant possibly think that this is OK for players to do this.

That isn’t how the OP levels work. A player who is OP1 or (OP0) who joins an OP5 -> OP6 run would NOT gain an OP level at the end, when the player playing as Sal killed the Binary Boss. That player would have to be the same OP level as the level of the game to gain an OP level upon completion. The following is taken directly from the BL2 Wiki on Digistruct Peak:

If the host and any additional players are at the same Overpower
level when a round is started, they will all rank up to the next
Overpower level once the arena is completed." 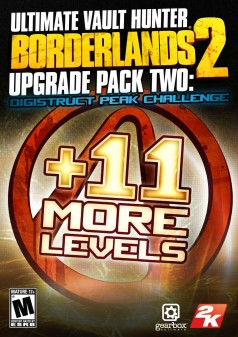 The Ultimate Vault Hunter Upgrade Pack Two: Digistruct Peak Challenge is a DLC pack for Borderlands 2 released on September 3, 2013. It is not included in the season pass and is priced at $4.99/£3.99 It increases the level cap to 72, but also...

But that is how i leveled up my friends, they were at OP 0 - 3 roughly. I started the game on OP 7, i ran through the raid solo while they stayed a little bit behind me and at the end they gained an OP level each. They did not go straight to op 7, they only went up 1 OP level.

Given the way DP works, I don’t even see how this would be possible. Your OP0-3 friends should not have been able to gain an OP level when you completed the OP7 DP run.

I can assure you that they gained an OP level but anyway back to this skip, is this skip used by casual gamer. We are talking about this but we don’t even know if hes using it. I would like a moderators opinion on this skipping feature.

Perhaps a moderator could also comment on how it is possible for a player / players who are below the Host’s OP game level(example: Host’s game is OP7, other player is OP3) to gain an OP level upon the Host’s completion of a DP run, when DP isn’t supposed to work that way since the player had not completed previous OP levels.

Hey guys just to clarify I complete op5 runs for players who are op 1-4 then when they reach op5 I go to 6,7 and 8 . I can assure you that if I complete an op8 run and the other play is op2 they will gain an op level. I could do a video on this to show you of you would like ?

Thank you for clarifying this, I knew i wasn’t wrong about that.

Your commenting at the fact i done the run legit and helped someone gain an OP level but the skip is completely fine? I can’t seem to understand that logic. Wiki is wrong, maybe this was the case for borderlands 2 when it first came out and they changed it.

No, I’m commenting on the fact that your friend shouldn’t have been able to gain an OP level if you were hosting DP at OP7 and your friend was only OP3. Unless DP has changed substantially in the last 6 months, that should not even be possible. The “Rocket Jump” skip is just a shortcut (only available for Sal and then only for OP5+ since it requires the Binary Boss) and can be done legitimately with the proper spec and equipment without altering the game in any way. Perhaps @joe_king can provide some insight as to any recent patches to the way Digistruct Peak functions?

TLDR; Is it now possible for a player who is not at DP Host’s OP level to gain an OP level upon Host’s completion of a DP run.?

I believe only the TLDR; is important. I have helped a lot of people on OP runs. I had 390 odd friends at one point and i would look at the available games and would try and help anyone doing OP runs, friends or multiplayer. Were strictly talking handsome collection. I dont take notes on what OP level each player is but i am 90% sure that when i hosted a lobby on OP 7 or 8, the players gained an OP Level after completing no matter what OP level they were at the time.