I did not think this was possible. The Kiss of Death is a Red Text Quest reward.

This is a new one on me…

Is this supposed to be possible??

Yes - I’ve gotten them from him before 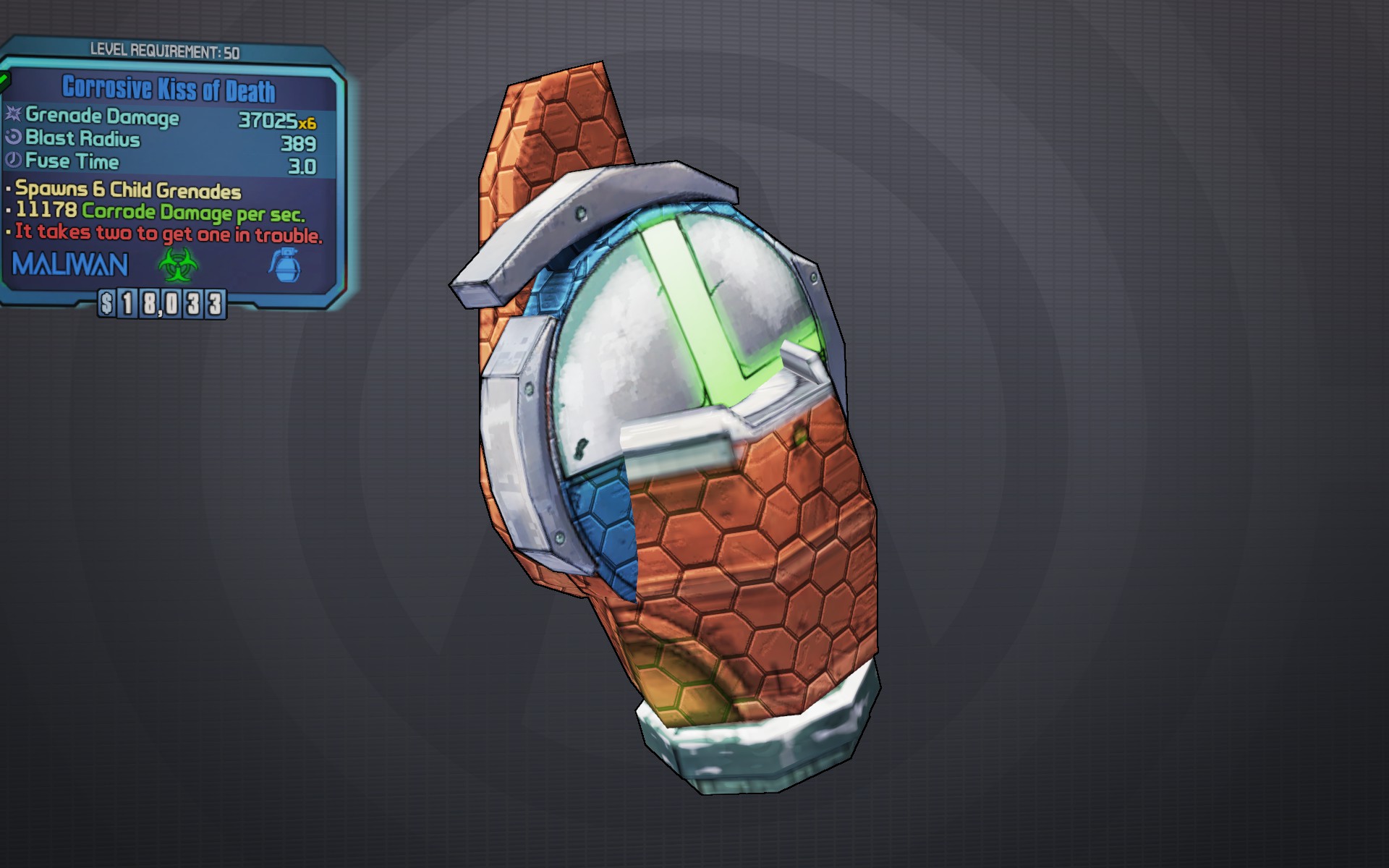 In all these years…never gotten one.

Hell, I got a Hide the other day off Terra and THAT had never happened either.

This is a new one on me…

Only had it happen to me once.

My reaction when it dropped:

Soon Cobras and Twisters will be dropping like candy!

All that impossible or one time only Gear

There for the taking.

If I remember right it is just a glitch, but so is the Norfleet’s color scheme which is supposed to be a blue…an absurdly powerful blue. Same with the Torgue Ogre.

Hyperius has a bizarre loot pool made up of random junk, which makes farming a Norfleet that much more frustrating. Well, not everything he can drop is junk, as he can drop the Hornet which Knuckledragger NEVER FRIGGIN’ DROPS FOR ME! >.<

You can litterally do a run every minute or less…

I use to run all the way from claptraps place till I discovered this. Makes farming for a hornet pretty darn easy

Save and quit
Restart
Come back into Knuckle Draggers area…he will be there fresh
Kill him
Save/Quit/restart
And you will spawn IN THE BARGE with Knuckledragger just outside
And every time you save and quit from now on it will be like that.

You can farm Knuckledragger in seconds…

I can farm Knuckledragger just fine, I was referring to Hyperius’s bizarre loot pool.

Nobody knows for sure what he drops, but his believed loot pool contains the Kiss of Death (The strangest one, a unique mission reward), Hornet, Shredifier, Sledge’s Shotgun, Evolution, and possibly the Deliverance and WTF. I’ve had several Hornets and Kiss of Deaths (Kisses of Death?) drop from him personally, never seen the others but there are many unconfirmed reports, and all include the two items I’ve seen too many times to just be coincidental world drops.

His loot pool appears to be bloated and nobody knows why or what exactly is in it.

Edit: I do remember seeing an Evolution but only once, that was before I knew about his loot pool being so spread out so I wrote it off as a world drop.

Getting a pot full of Serif Chrystals though…so that’s good.

And…now he dropped an Actualizer…

Never had that drop from him either…

I think he has four seraphs in his pool. Actualiser, Tattler, Retcher, and I forget the other lol. But they’re guaranteed drops separate from the rest of his pool, like Terramorphous with the Slayer COMs.

You’ll get those occasionally, and one time I got a double seraph drop with a Devastator which was pretty random.

I’ve had so many Tattlers and Evolutions drop from him… those two seem to be the most common Seraph drops from him. Seriously, some farming sessions with him leave the arena looking like someone spilled a big box of Evolution cookies all over the place.

(Late edit: and Retchers! My mind blanked on those… I tend to put splatguns out of my mind I guess!)

I think if he drops a Legendary (or Kiss of Death) it’s in addition to his Seraph drop. Hmmm need to double check that, whenever I see the orange beam glow from his lootsplosion I get too excited to pay attention to any new pink beam that’s popped up.

one time I got a double seraph drop

I haven’t gotten one from Hypey-boy but the first time I killed Vora he double dropped an Interfacer and a Hawkeye, which was quite kind of him.

(another late edit: did a little farming with Hype and it does indeed seem if he drops one of his designated legendaries, it’s in addition to the guaranteed Seraph (Hornet + Tattler in this case)

Nice! It’s weird when they drop two seraphs at once, and even weirder (at least in my case) since it wasn’t one of the ones he usually drops.

TC said he got an Actualizer too…that seems really random.

The kiss of death, actualizer, and devestator will drop along with either the retcher, tattler, evolution. The first three when they drop could have been a legendary but you got one of those instead.

Definitely has evolution I’ve had dozens from him, I farmed for 4 months for a fire norfleet before I finally killed voracidous and started online I can now just dupe everything in seconds which is much easier) usual drops are the retcher, evo, tattler, wtf was pretty common. I got a hornet and 2 sherdifiers back to back but the game crashed both times before it had saved so I didn’t get to keep either one ha. I never really checked blue gear. Oh and a bunch of norfleets probably 15 before he dropped a fire one with more than 3mag size which is useless.

When I killed Hyperious for about 88 times in a row almost always dropped a a retcher with evolutions and tattlers being just as frequent. The kiss of death dropped quite a few times too oddly enough. I had to pick them all up when my old pc started lagging really bad.

Only ever had one Norfleet drop off him but the lack of Norfleets was made up for the fact it was practically perfect. That sucker dropped three years ago. I threw it on my shock oriented Gaige but I rarely use it except for second winds and the occasional BAR farm.