Idea for a future borderlands: enemies can res each other and get second winds

Imagine if the enemies could get second winds or get brought back up by their buddies. Or even the archvile effect from doom2 (these creatures would walk up to fully dead units and bring them back up).

I think I’d like to at least see the capability for them to get brought back up when they are downed. Maybe most of them wouldn’t shoot from the ground while they are down. But some certainly could. And they could have a countdown timer to when they fully bleed out, just like us. And you could speed up their timer by shooting them.

It might mess with kill timing for the players. When does the enemy count as killed for the players second winds and kill skills? So maybe it needs to be only special units that could get back up.

Having a down but not out mechanic on AI would be like Gears of War, which isn’t necessarily a bad thing. It could be interesting in the BL universe.

We already had something like that with the Goliath couple in the Valentine’s day DLC and I think it worked pretty well. I wouldn’t have this mechanic on all enemies, just a select few.

Certainly agree with this not working on all enemies. Mobbing would be an absolute nightmare when ten or more enemies are using you for second winds.

I agree with this. Having a mechanic like this on grunts and everyday common enemies would be really annoying TBH, however on a boss or certain badasses it would be awesome.

I’d like to see that as a gimmick for a boss fight or some badasses. They don’t have as much health as the other guys in their class but they have weaker minions that can revive them. Get rid of the small guys first or suffer the consequences.

Get rid of the small guys first or suffer the consequences.

The never ending mobs… It would be nuts in an arena, but normal play it would be tedious.

I would limit it to a special type of enemy like a Medic who revives his allies. For robots… oh man a Re-Constructor would be so fricken annoying. Stuff like that would cause some target priority choices.

Woo I got a badge thingy… badge thhiiingggiessssss…

Back in Doom 2, if an archvile got released and you didn’t take care of it quickly enough you could certainly be screwed.

Refreshes Doom memory with Google… OH GOD THOSE… fricken face roasting arsehats. I must of forgotten they resurrected things. Its been WAY too long since I Doom’d lol

Refreshes Doom memory with Google… OH GOD THOSE… fricken face roasting arsehats. I must of forgotten they resurrected things. Its been WAY too long since I Doom’d lol

Yup. They were more annoying than most bosses in the game. The res ability, combined with their ability to magically hit you simply with line of sight…

Most of the time you were racing time to either get out of their line of sight or shoot through the slog of raised mobs between you and him so you could hit him and cause him enough pain to stop his attack, or finally kill him. 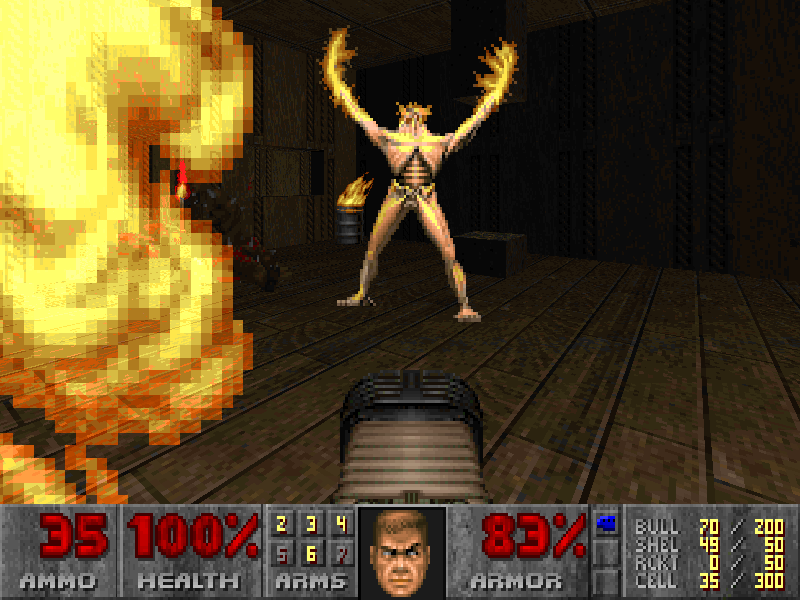 Arch-viles are very tall, emaciated-looking, peach-skinned humanoid figures with a grotesque appearance, including stigmata. They also have no flesh around their abdomens, revealing some of their ribcage and spinal column. The Arch-viles first make...

Sounds like a great idea to me, but as others said it would likely only work on badasses and the like, unless all grunts gad a very fast SW timer, then it wouldn’t be too bad.

I’m not sure I agree with that game design mechanic. A player is having trouble with a certain area? Lets punish him more by making enemies even harder! Rather I think an interactive AI like the one in Left 4 Dead would be better. Left 4 Dead detected when things were too easy and started throwing stuff at you dynamically.

I like that idea. Plus, on top of that, with stronger enemies comes better loot to reward your skill.

An Orc badass in the Tina Tina DLC randomly leveled up. Don’t think it was on kill, it just was all “guess what, LEVEL UP!” Oh yeah… the one Dragon in the Raid Boss also leveled up his friends… ugh that was painful. You made sure that dragon never landed.

So we don’t “quote” posts we just reply now? Weeeeirddd

DOOM 4 is a thing, so that’s one way to celebrate.

boss fight or some badasses

This would be a great addition. You really only have maybe a hand full of instances (all BL games included) that you feel the need to take out first. Maybe each form of badass mob has a diff ability (rez, ffyl, longer ffyl, can get second winds from own minions)

I’ve always been a friend of level up-mechanics, so a “let’s kill my minions to get myself a second wind and then lv up” would be of my tastes. But a normal enemy should die when suppposed to, so let this kinda stuff for boss fights!

Sounds cool for bad-asses, but I am not sure if I want it for every mob.