I have BL2 Game of the Year Edition.
I know that legendary items drop at a random rate but…
My question is about farming.
If for instance the Black Hole takes approximately 20 tries to get a drop
Does powering down your system during part of a farming session affect that number of attempts.
Example 5 tries then turn system off and repeat the 5 tries each day and turning system off each day .
Should I expect the legendary drop on or before the fourth day .
Or does it have to be a twenty attempt session without powering down the system ?

No, powering down does not affect it.

Picture it like rolling dice. You have the same probability of rolling all 6’s if you roll the dice once per day for 100 days, or 100 times in a row.

What DOES help is to have multiple players. If you bring a mule with you your chances will increase a bit, as will LM, Badass, and Tubby spawn rates. Also the VH relic helps a little, I let my mule wear it just for the tiny tiny boost it gives.

If you want more detail on how the RNG works, there’s a thread for that

I only makes random blue equipment pop out of enemies a bit more. It does nothing for designated legendary drops.

No, it affects ALL drops by reducing the chances of getting white gear, per Gearbox (http://www.gearboxsoftware.com/2013/09/inside-the-box-the-borderlands-2-loot-system/)

The amount it changes everything gets smaller the higher you get in rarity. I did the math a long time ago and it is on the wiki page. The math does not reflect the last legendary drop increase. 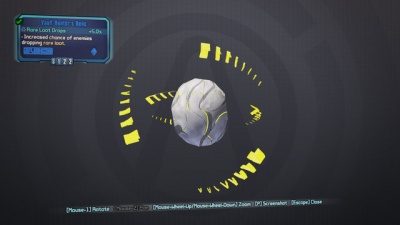 The amount it changes everything gets smaller the higher you get in rarity. I did the math a long time ago and it is on the wiki page. The math does not reflect the last legendary drop increase.

The legendary drop rate increase only affected designated drops to any significant degree. And those aren’t affeected at all by the VH relic. So you’re really only looking at the world drop chances in each enemy’s loot pool for a very slightly better chance of an (extra) legendary. It’s great early game for the increased greens and blues; I’m not convinced it’s worth it during UVHM or end-game, when the boost from a decent relic can make a big difference elsewhere (damage output, survivability, action skill activation, …)

Not saying people - including you - shouldn’t use it if they want to. But I’ll take a significant over a slight advantage any day!

I keep it on my Mule. That way he is at least doing something useful with that equip slot.

That’s actually not a bad strategy unless… Are there any relics that give team boosts? I know there are quite a few nice class mods for that purpose.

Oh yes, there’s this one - you should definitely stick that on your mule some time!

Oh I have! MAGIC SPARKLY FUN!!

For the most part my Mule (Salvador) wears a Hoarder Class mod and a Vault Hunter Relic.

When I am farming Torgue machines I switch and we both wear 33% Lucrative Opportunities.

Thanks for the information.
I like knowing that if I get bored with one farm I can go farm somewhere else.
Especially when we have frequent power outages.
I’ve almost refarmed all of the legendaries that I lost when I foolishly deleted a character a few days ago.