Oh that’s sexy. I’m a fan, for sure. I may also have to “reverse engineer” said capital ship chassis research if you don’t mind

may incentivize me to take up the Kushan roster, since once I can build the general frame of one the others won’t be too dissimilar.

Off topic and slight explanation for my absence, I moved and got a kitten. pic related. My lego table now fits in my bedroom here though, so expect more regular posts coming up.

reverse-engineering is absolutely okay.
it’s pretty much just Kragle’s support frigate engine rebuilt to be more on-scale with the rest of my stuff, which meant taking the actual engine plate up to two studs and the ship itself up to three.

I end up using a LOT of 3-to-2 jumper plates.
like, so many.
honestly, I could post some breakdown shots if you want.

and yeah, the assault frig is absolutely my fave build thus far. I had a couple issues with ‘what-do-I-put-here’ and getting the overall curvy Kushani style to work, and I rebuilt that whole front greeble area like four times before I was really happy with it. I’m also really happy with those turrets, they’re actually based on a tablescrap that’s in with the rest of my physical lego (which is all in storage) but that 2x1 palisade block just makes super-sexy barrels.

Fair enough. I’d like to do another set of frigates soon though. They’re the easiest to do compared to say. Destroyers. Or carriers. Oh carriers are gonna be fun…

I might set PayPal up to receive funds and do a pay what you want model for my legos. 1100 views so far on my Victory Destroyer which is not too bad. I use PayPal to buy all my legos anyway. Unsure though. Doesn’t hurt i suppose. Mostly Star Wars stuff since I wouldn’t be comfortable profiting off anyone else’s work. I just feel like charging for instructions goes against what I like about the LEGO community.

Sighning off, and the support frigate STILL isn’t done. I literally made two frigates, a corvette and a probe in the time this thing has already taken.

download (5).png1139×551 212 KB
baaaaasically why this isn’t done yet. SO MANY ROBOT ARMS owo
there eight, count 'em EIGHT, smaller arms on this build.
all of that mess is articulated. even the big spotlight on the front there can spin and elevate/depress.
still have about a quarter of the hull to do, and some greebling, then it’ll be time to paint everything.
1 Like
Mechworks October 11, 2018, 9:27pm #407 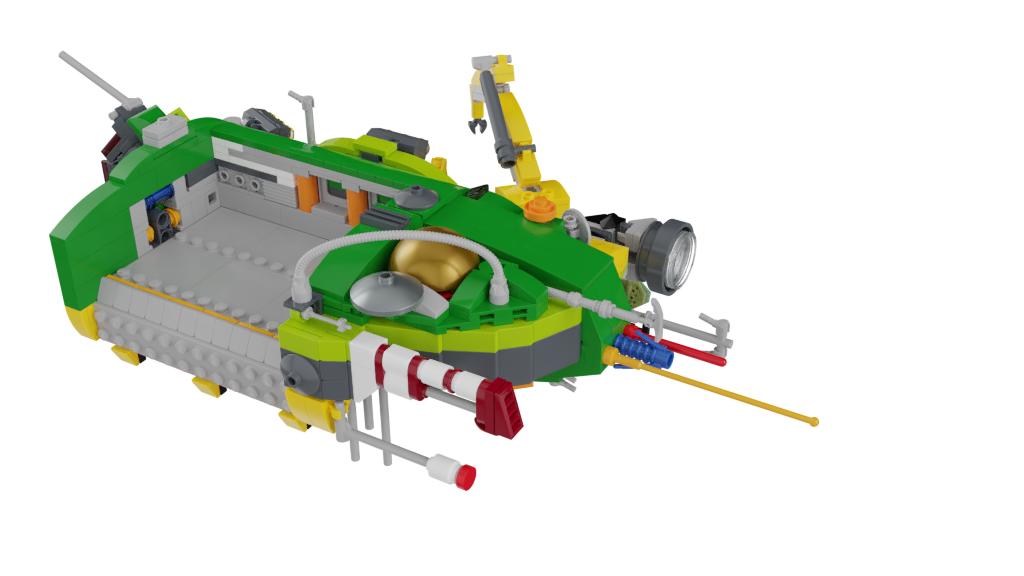 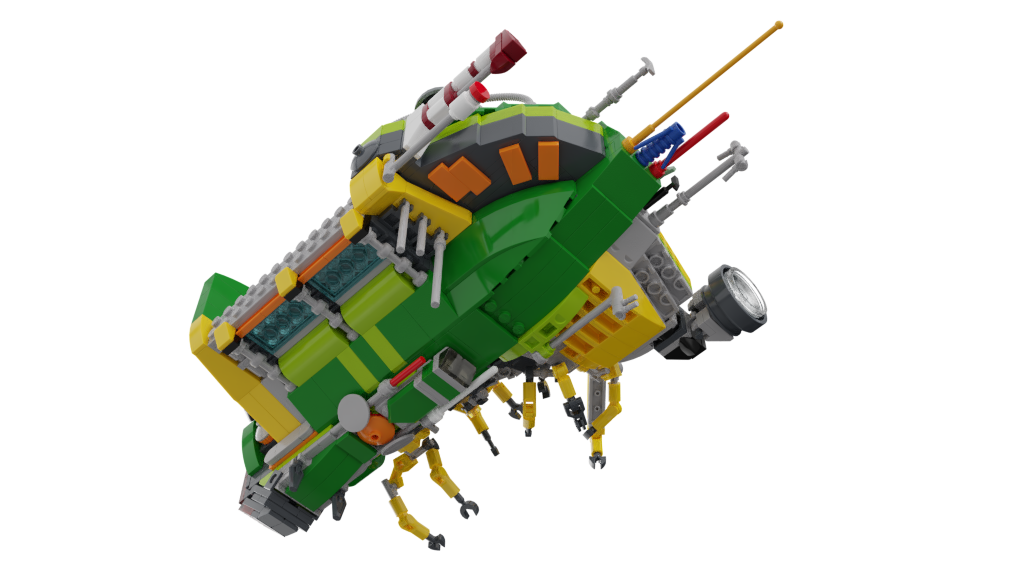 mqMx1PG.png1024×576
underside shot, the ship’s resource drop-off is right under the module slot.
speaking of. 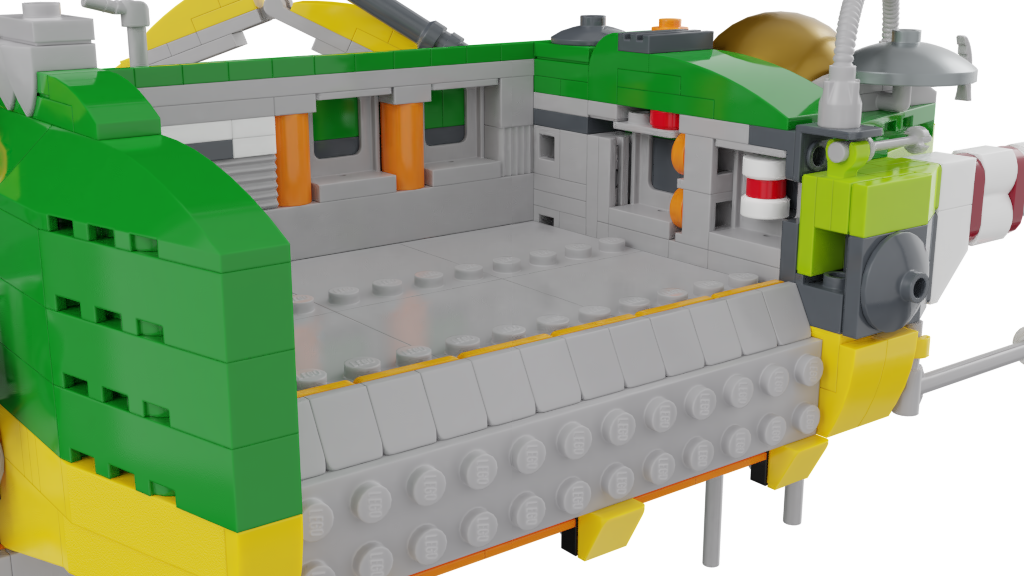 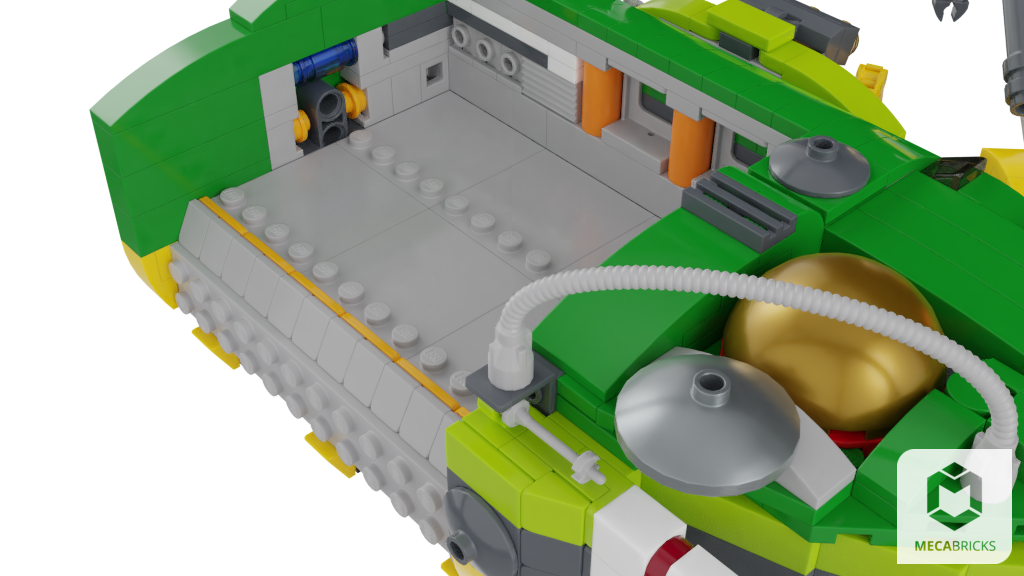 zjDltTk.png1024×576
it’s got some nice greebling inside there so it looks nice even without a module in. 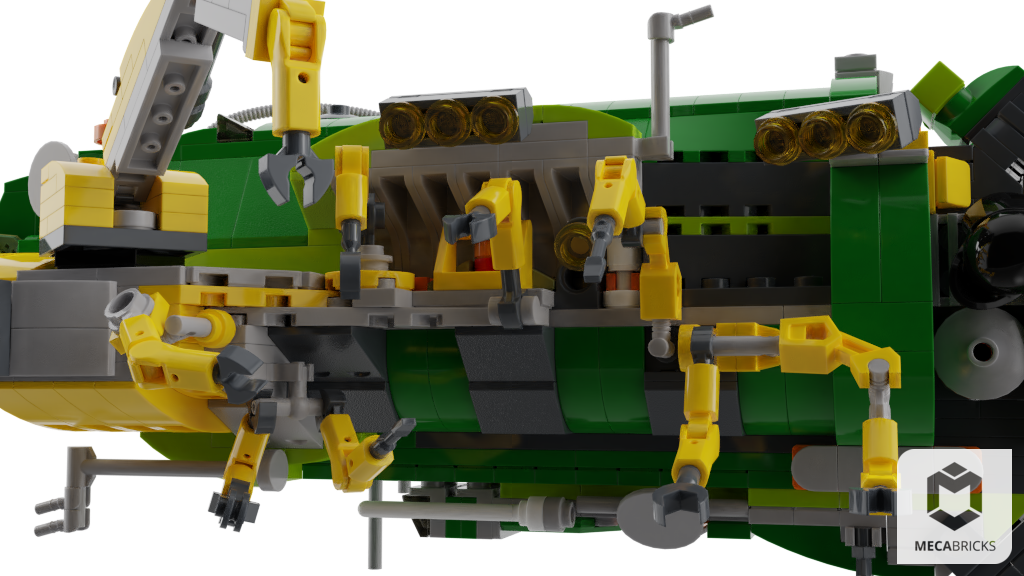 nhtESU2.png1024×576
anyone else really fond of using those toolbox parts as big 'ol spotlight clusters? because I am!
also, this section probobly added something like ~5 hours to the build, but it was so, so worth it.

Dm6IBE7.png1139×551
a pre-render shot with all the articulated stuff hidden. anyone else use those 1x1 half-round flat plates to let an inline clip rotate? because you can get a few degrees of swing doing that.
3 Likes
DarthSoban (Kurtis Millette) October 11, 2018, 10:40pm #408

Ooh. One thing for sup frigates. The 1x4 tiles in light blue transparent. They look amazing rendered in. But transparent pieces take a boatload longer to render. I can do that tho. Or even, I’m getting interested here, LEDs, cause lego has light parts.

On that note, I am also planning to start making a base technic brick structure for a motorized Kapisi. It’s gonna be huge tho.

“just some tablescraps” I said.
“It’ll be nice to clear my head before I tackle the Carrier” I said.

Both my planned Cruisers will be SHIPs in and of themselves, or very nearly so, so I intend to document their construction as I go.
I decided my ‘carrier’ type would be a Production Cruiser with a Vaygr-style large central hanger, that can be set up to build either capships or fighters. This is both to keep the size of the ship itself down (and, thus, the size of the mothership Command Carrier down) and because I wanted to show Manaani emphasis on speed with lighter, faster ships in the supercap roles.

jig 3.png1139×551 383 KB
My fighters (and probe) are actually fairly compact- three bricks high gives a reasonably comfortable clearance for tighter hangers, and the whole thing is only 10X12 studs long, though most clearance here is a bit more generous. for the final desgin I might take this up by two plates vertically, to give a bit more clearance along that axis, but it’s still very compact.

jig 1.png1139×551 75.3 KB
the frigate measurements, naturally, were quite a bit larger: 20x52 studs and 21 bricks high- and that’s with the support frigate (which is somewhat wider than it is tall) turned on its side to better match the dementions of the other two!

however, a shot of all three jigs zeroed in and facing the same revealed something interesting:

tomorrow I’ll get to work blocking out the hanger bay cavity and experimenting with doors- I recall seeing an interesting solution with large technic elements that I think were the backs of a dump-truck model, and honestly I’m still not entirely familiar with all the parts this program has yet. failing that, I’m sure I can find some good-looking doors to borrow from with a few quick google searches.

Edit: also, I do have a feature list:
-Large central hanger with variable internals for fighter/corvette/Frigate production
-2 high-capacity resource drop-off points
-2 or 3 support module slots ala HW2
-engine that visually dominates the after third of the ship and is no less than a quarter of its total length
-solid enough that one could reasonably expect to be able to subject the completed build to light handling (picking it up to move it to another table, that sort of thing)
-playable bits like robot arms and hanger doors and suchlike

As it turns out, there were no single elements suitable to making a door for this thing, so I would need a brick-built door. as a result, I decided that rather than my original plan to make all the hanger production top-loading I wanted my capships to exit the side of the ship, calling to mind the Mothership’s arrangement or the underslung hangers of the Kuun-lan. I also realize that keeping the ‘top’ launch-points for fighters and corvettes would allow me to do something cool and have the strike-craft upgrade be a flattop, but since this was going to be a quite large cavity it would need a beam in the ‘open’ corner to be stable enough to pick up if built (a key feature) and given the ship’s probable size, I would need to make it modular- that is, built of snap-together segments that could be disassembled for transit.

with the general structural requirements fixed, I set about making a rough of the hanger cavity:

Hanger 2.png1139×551 180 KB
I made it slightly larger than strictly necessary, since I planned to incorporate ‘playable’ bits into the space- industrial assemblies, fighter elevators, floodlights, etc- and also wanted to have room for internal detailing from both the actual hanger modules and the bay without the module in it. to help make it a bit more visually interesting I also decided to put a slight curve in the back of the hanger, so it wasn’t just a big box on the inside.

Hanger 5.png1139×551 189 KB
as you can see, the Assault Frigate sits quite comfortably in the space there. I’m still not sure how I’m going to actuate the hanger doors- I decided to take a break at this point, both to update the thread here and to trawl for interesting door solutions.

I’m almost tempted to use crane arms to make a ‘push out’ panel door like the Mothership and Pride of Hiigara’s capital hangers, just as a sort of callback. hmm. I’ll have to experiment with how viable that system is later.

Those garage doors that fit on the sliders maybe? They have ones that fold as they go. Gimme like a few hours as I’m out.

Edit: nvm there would have to be an ugly bar in the middle of the hangar based on my size guesstimates. Dang. If only there were double tall ones. I mention it because I actually use some in Mocs I’ve made up for similar “big builds”

To be honest hangar doors are not particularly “homeworldy” anyway…

These weren’t homeworldy things i was doin so fair enough lol. Just a nod to the ms perhaps

Me, roughly five hours ago: "you know I think this passed beyond ‘tablescrap’ around noon. oh well.

still not sure WHO these guys are yet.

I packed this thing with fun deets like these:

Let’s be honest here, the first time we heard those words we realized that here was the race who had kept peace in a galaxy for thousands of years, often with force, and immediately had the thought that, if this is what they were like after over four thousand years of demilitarization, how mighty and immense must their armada of old have been, in the full waxing of their power, when even a word could cow an empire?

Or as Arturo would say, “Bandosi”

A little something to whet your appetites: 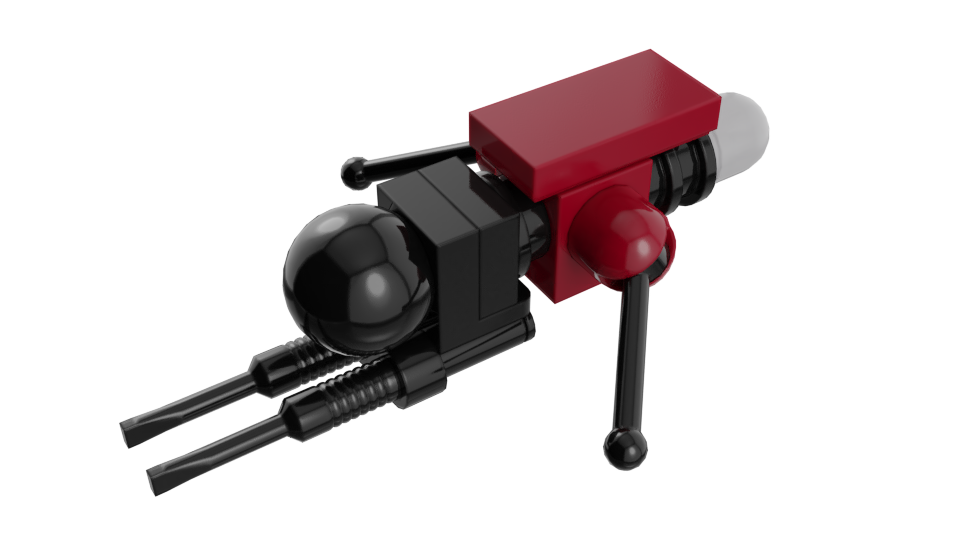 ckQXzHP.png960×540
first, my Definitive SandSkimmer, hybridized from the various MoCs I’ve seen of it. 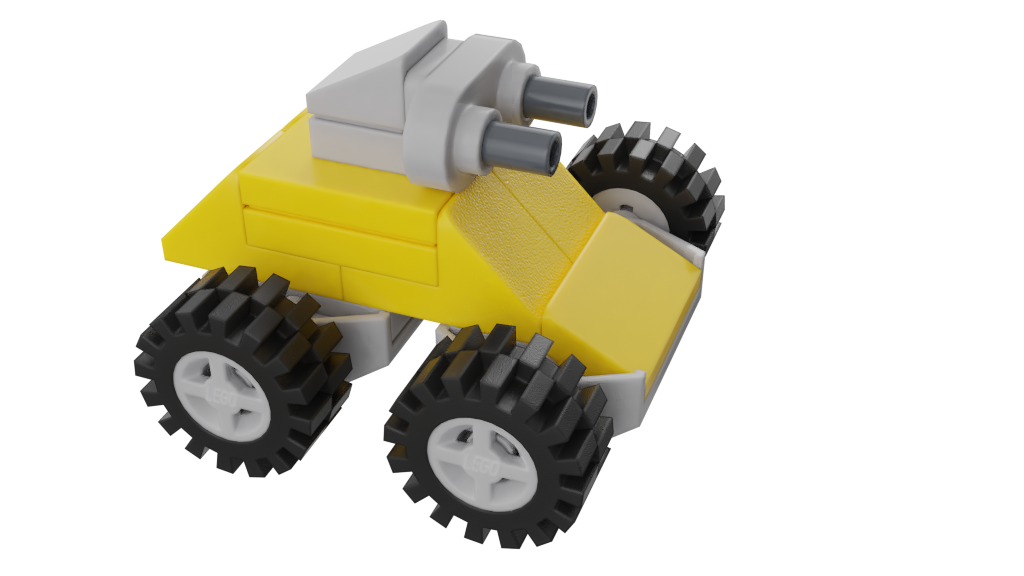 Wl3IED9.png1024×576
next, a Colaition LAV. dunno if I like this one or Doci’s better. speaking of, does Doci put his stuff up anywhere?
I need to know for, ah, science reasons. 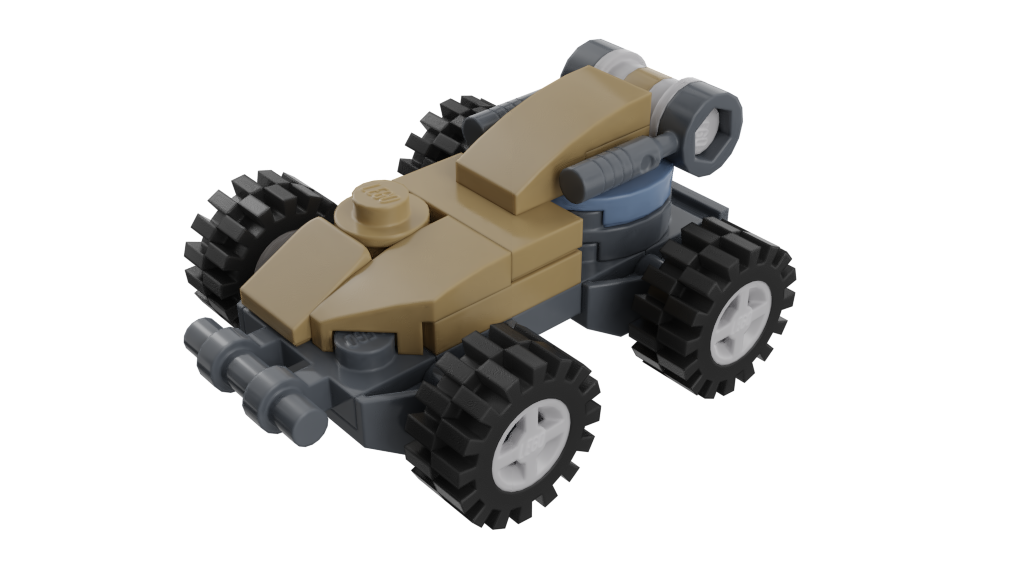 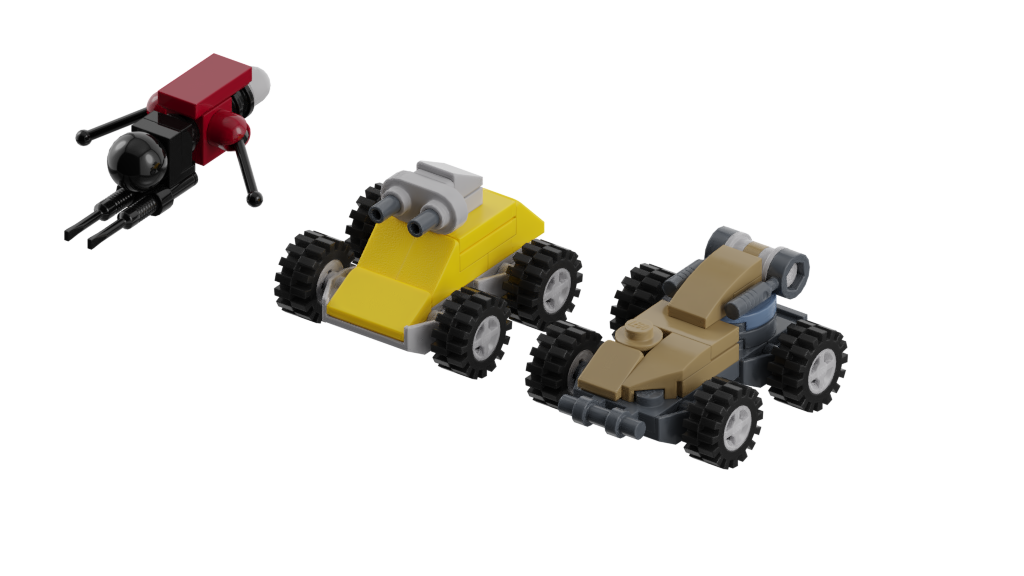 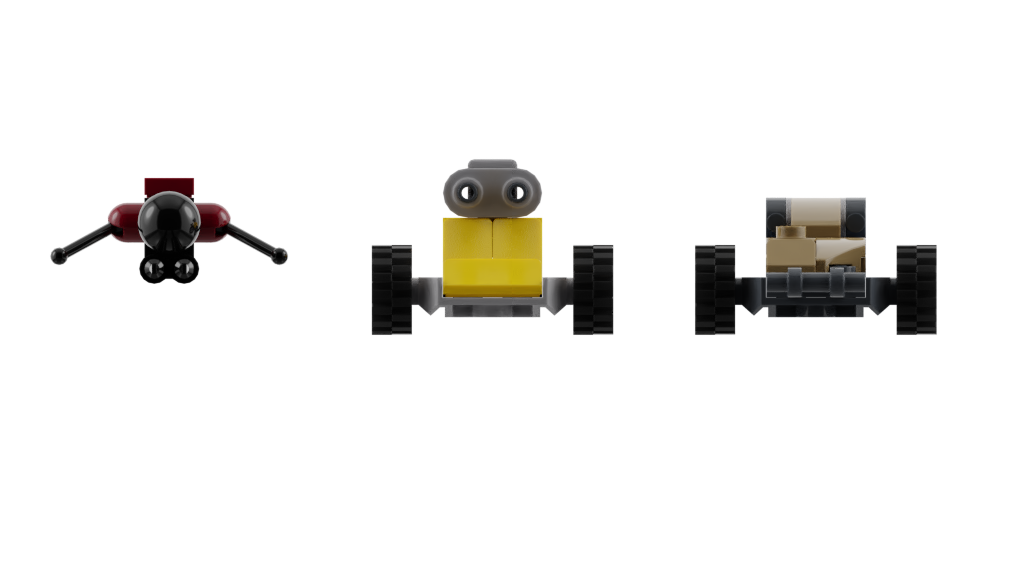 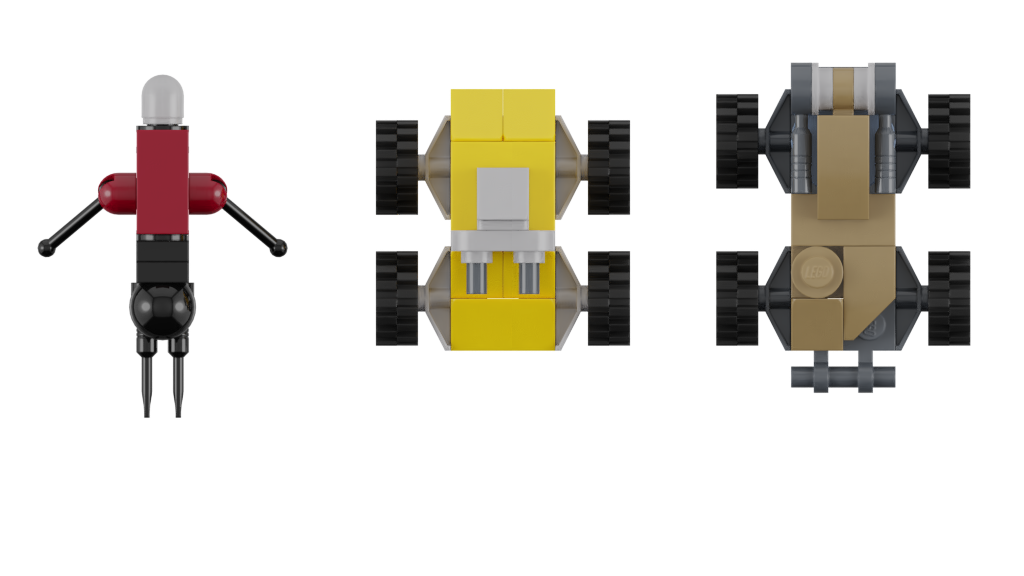 Finally, here’s all three LAVs together for some Orthographic shots.

I would like to acquire this research for Kushan frigates.

Finally decided to get the parts and built it after more than 2 years. Had some minor changes along the way. Hangar module is not as sturdy without the lower decks attached but it still works.

Deciding whether to build the beast mother’s hip next or if I build the Somtaaw frigates and capital ships instead.

will be working on these next!