So i have finally reached level 72 the first time and want to do some raid bosses solo. Pete is really hard to kill but i think an explosiv axton will do with an inflammable bee. So is there anyone willing to trade? ive farmed thes f*** trees for hours and got about 20 bees and one was a grounded bee. I finaly want to get some Seraphs O.o
Will trade for the grounded one!

Oh man that could still take a while to get. Getting those right prefixes can be a pain. I am not sure but it feels like with with shields its harder too. You might be better off seeing how you do with a regular bee and going back to farm if needed. Also Explosive Axton could work well but a shock weapon with a shock bone should work better. It should deal more damage plus you get that extra cool down. Or at least it will definitely decimate his shield faster. A sandhawk is optimal but a ladyfist, lyuda, or pimpernel should also tear him up. Explosive Axton should be do-able though, I think I had soloed him with that kinda setup at op1 or like lvl 67. What do you play on? I have a 60 something shock bone on my maya and a perfect lvl 72 shock CC. I might have other gear but I would have to check.

thanks for your reply. i have reached level 72 recently. I’ve been experimenting with my Build since.
Shields:
Im Using A Lvl 72 Bee / Lvl 72 94% Sham Shield.

Granade:
Fastball (Love it so much) explosive and shock

For max explosive damage im using an explosiv relic.For his shield im using a shock fastball and the shock relic but have no shock weapon so far. Im slagging with my turret atm because of the lag of good slag weapons.

Im slagging with my turret atm because of the lag of good slag weapons.

I just made 60 on my Axton, and I have been spamming Magic Missile, using an Explosive Build, and an Explosive Relic.

Means I can keep my DPUH on target and still Spam Slag, I highly recommend it.

how to get them?
Sounds nice

You need to Kill Mages/Sorcers etc in the Tiny Tina Expansion.

I only have the one, otherwise I would happily let you have a spare, level 60, but I just traded up from a level 36 at level 60, and it still slagged very well, plus they regenerate, so you don’t have an issues with spamming them.

Thanks for the advice. Sounds like i have to play through Tiny Tinas DLC (didnt go further then the forest).
Hope for a Casual Swordsplosion and the magic missile.

Do anyone of you guys want to do some raids?
GT: Pascii20

Haha nice pick up from a vender!

For slag I almost always stick to grenades. Depending on the situation it’s magic missile or a longbow slag transfusion(the shorter fuse time the better). So for his shields you could just get any slag gun with a good percentage and spam the fastballs. The thing though with the dpuh and pete is getting the max out of it and keeping your shield up. His attacks make you stay away too much distance to get real good damage out of it. And those other guns don’t have a lot of synergy with the bee. Idk maybe you can make it work though. I used an explosive build but i think it was also geared toward using tediores and did most of my damage with my reloads.

Im playing on xbox one.
Today is my lucky day. Just started the dlc and a tubby bones spawned wich droped 2 legendary (commander class mod and infinity). Then got a chain lightning from a sorcerer. Still farming for magic missile

So i have finally reached level 72 the first time and want to do some raid bosses solo. Pete is really hard to kill but i think an explosiv axton will do with an inflammable bee. So is there anyone willing to trade? ive farmed thes f*** trees for hours and got about 20 bees and one was a grounded bee. I finaly want to get some Seraphs O.oWill trade for the grounded one!

Shields are somewhat resistant to Explosive damage. So you would want to remove the Shield first before using an Explosive weapon / grenade mod, ideally using a Shock weapon / grenade mod. Also, Pete doesn’t drop too many Seraph items that are very good. However, you can also get some Legendary items from Pete.

Most decent, good or very good Seraph items are dropped by other Raid Bosses in UVHM. Some of them can be purchased from Seraph Vendors (using Seraph Crystals) in TVHM or Normal mode. However, Seraph Crystals can only be acquired from Raid Bosses in UVHM. They don’t drop in TVHM or Normal Mode. Apparently, Seraph Crystals used to but GBX thought that made it too easy to get Seraph Crystals. Some good Seraph items include the Ahab Rocket Launcher (bypasses shields), Interfacer Shotgun, Tattler SMG, the Florentine (Slag / Shock) SMG, Seraphim (Fire) Assault Rifle, Lead Storm Assault Rifle and Evolution Shield. The Seraph Vendor wiki page has some good information, regarding Borderlands 2 Seraph items. 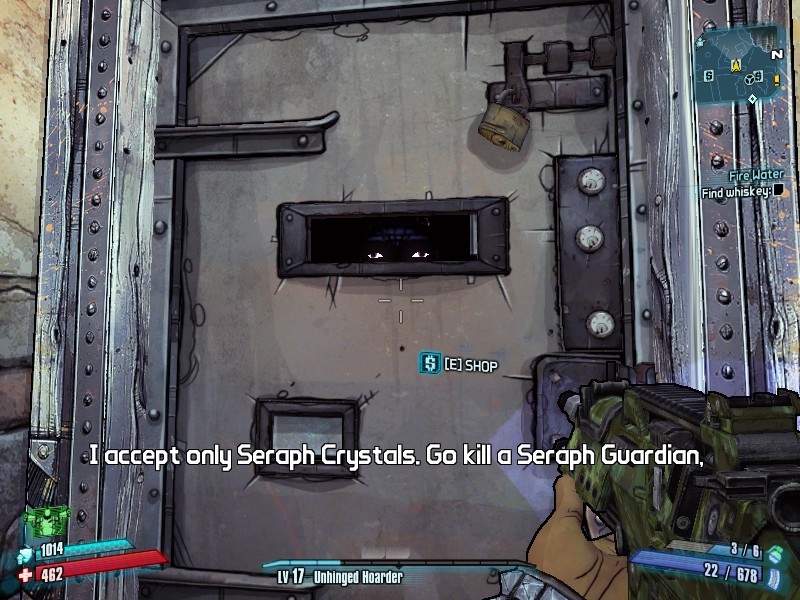 The Seraph Vendor is a NPC in Oasis, the Badass Crater of Badassitude, Hunter's Grotto, and Flamerock Refuge that exchanges weapons, shields, grenade mods and relics for Seraph Crystals (in a similar manner to the Black Market). Certain Seraph items...

Personally, I recommend playing the How Marcus Saved Mercenary Day Headhunter DLC to farm for some better equipment, in addition to farming WEP for LLMs with Doctor’s Orders active and open (don’t pick up any of the Notes). How Marcus Saved Mercenary Day isn’t too difficult and does not take very long. Initially, it shouldn’t take longer than 30 minutes tops. Axton’s shield can act as a pretty good distraction, particularly during the Boss fight. Also, once you complete it one time you can farm the Loot Train and potentially get Legendary or even some Pearlescent items. If done in UVHM, the enemies and drops will level with you.

At OP8, farming takes me on average 3:00 which includes killing the Boss. That part takes about 20 - 30 seconds. The rest of the time is spent traveling to the Boss and seeing what dropped in the Loot Train. I have gotten several Legendary Shields, Pistols, Sniper Rifles, Rocket Launchers, Grenade mods and Class Mods. The Loot train is the best source for farming for Legendary Grenades, since it always contains 4 Grenade mods. It is also the best source for Legendary non-Tubby Class mods. IIRC, you get 8 Class mods. You can also get some Pearlescent items, but most Pearlescent items I have gotten have not been very good.

That’s rubbish, move it from NVHM and TVHM, then only onto Raid Bosses in UHVM, it almost locks those of us who don’t play online from getting access to content, at least lets get the drops from UHVM bosses, but not just Raid Bosses.

i finally killed pete like 5 times and got nothing more then seraph crystals and a tunguska from the 2 chests.

Thanks for all your helps, especially to Poisd2Strike. I knew all these farming tips, but i feel like llm and loot trains loot pool is too big and at this moment because im searching for specific gear. yeeah pyro pete drops pretty much rubbish, but i feel like hes the easiest to kill atm. still hoping for big boom blaster.

yesterday i got a casual swordsplosion and a magic missile so my build is almost complete. im planning to buy the florentine or antagonist with the crystals. in addition to that i found a lvl 72 legendary soldier com in the loot train

I don’t know if you still need a slagga but I have a Bullets go Fasterifed Slagga if your willing to “trade” with me for a sham. I been farming Bunker for days and nothing lol. I also have a shock bitch if you would like that at all. GT is FrostiBarrel

I have just leveled up Axton to 72 and wish to trade for an Ogre as I am finding getting this very difficult. Does anyone have suggestions on the Murderlins Temple or wanting to trade? GT: barbrouge391