Level 63 hellborn so far doing dlcs. I seem to have trouble against loaders and armored enemies. Trying to stay moxxi free so healing is a bit of a issue against them. Build tips? Or gear recommendations? 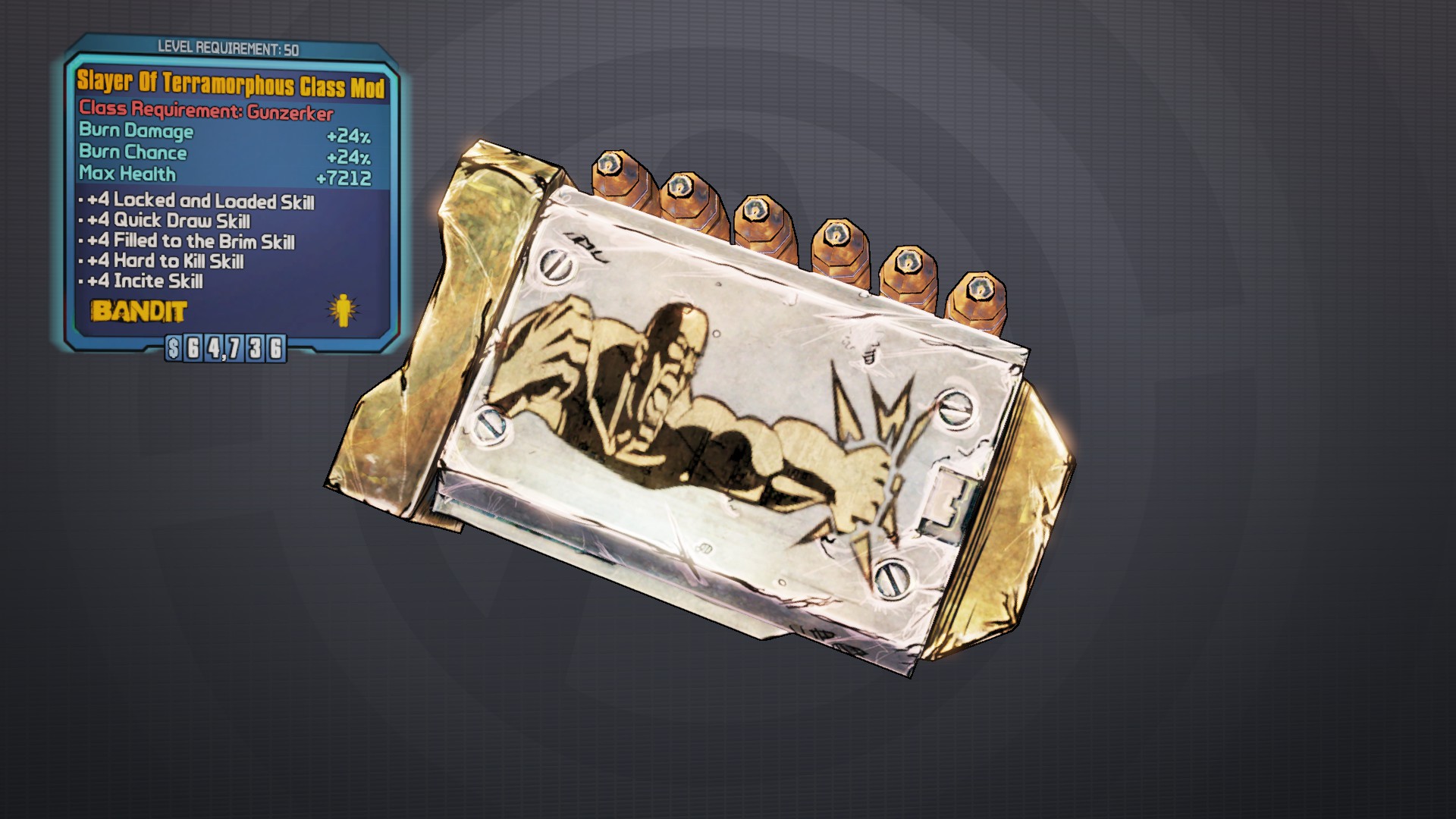 Class Mods, or COMs (short for Class Optimization Modules), are influential items in Borderlands 2. They are class specific upgrades that provide benefits to the character (or the entire team) by offering a wide variety of bonuses such as amplifying...

Your build could really take advantage of a Flesh, Crunch, Torch, Toast or Sickle com- anything other than the SoT. The above link has all of the available coms for each character- take a look and see what interests you (and considering the number of fire weapons you have maybe a Torch or Toast com?). As for your build and gear, you’re not getting a lot of use out of the Deputy’s Badge (with Jakobs shotguns it might be a different story). I’d suggest a Blood otA that boosts health and the ammo of your favorite weapon instead. As for your build I’d make this slight change:
http://bl2skills.com/psycho.html#00000000000030550105154152553101051
I know the reputation StV has but the RR does a lot to mitigate the damage from that 12%- and the additional damage could prove the difference if you melee those tougher armored fores. If you’re trying to get to at least the third tier skills of Bloodbath/Buzz Axe Bombardier/Fuel the Blood I can see why you skipped it. The 1 point in Thrill of the Kill is all you really need with RtB available and since you’re using the RR, Empty the Rage becomes even more useful. Just my suggestions…

try this and tell me how it goes (bloodust+mania+hellborn)

I seem to have trouble against loaders and armored enemie

the hornet, pimpernel or similar stuff works great with loaders on a hellborn build

i would change the class mod for a legendary torch or reaper, and with a hellborn build, health regen relics are generally useless to be honest

I sometimes use a health regen relic for (melee) Krieg. Too much health regen can mess up Release the Beast but there are situations when a bit of extra red goo is appreciated.

Silence the Voices is essential for any UVHM melee krieg in my opinion - it has to be carefully managed but it’s too much power to forgo.

yeah, in a melee krieg is quite understandable, but with hellborn with 5/5 elemental empathy isn’t because the health regen from the skill

In lousy at hellborn Krieg anyway

Hellborn is so much fun. You should really learn it and experience the joy of everything turning into ashes around you.

Im not sure if 4 points in TotK is worth it

Im not sure if 4 points in TotK is worth it

isn’t when your build has elemental empathy

Idk how well TotK works with Sawbar tho
Do you by chance know?

i don’t know to be honest

ToTK usually works nice with Fastball and Bloodsplosion based builds

Yeah for sure
It doesnt even have to go that far tho
Even sth like a SWORDSPLOSION!!! Or a Kerblaster heals you for quite a bit I find

My internet is back Tuesday. You can give me a display xD

Thanks for all the input. Reason i chose sot mod was for the extra ignite chance burn damage for my fire weapons, max health since im using a rr, and the strip the flesh boost/deputy badge to boost my flakker for the slow reload speed/damage since i use that when in ffyl works fine if im downed close to enemies. I rarely use melee when i rtb unless im on fire for the damage reduction. I usually just rtb run away and throw the axe at a distance. Im waiting for buzz axe bomb and bbath. The 4 points in totk was just to help get to rtb. Looks like i need to farm tubbies to try the other leg coms. I might try a toast com.

Question. Does explosive damage heal you when on fire from ele empathy?

No, only elemental DoT s
especially corrosive and fire

If only explosive damage did heal you with Elemental Empathy…

Tips?
Works great for mobbing. Raiding is a difficult.
I was thinking of switching to a explosive relic.

Can’t get to your build- can you repost your build link?

Anyhow your build looks pretty solid for the most part imo
Tho
If I remember correctly you said you only throw the buzzaxe when on RtB right?
If so why not take StV instead of Empty the Rage?
You wont be self hitting much since you mostly throw it and it will make your thrown buzzaxe deal more damage
Then again its personal preference

As for raiding, Ive only killed a raid boss once on op8 and that was Terra so I cant say much, but I think a Legendary Reaper/Legendary Sickle/Blister COM would be better for a raid(depending on your method of choice ofc)