Looking for Battleborn Folks for a Gamejam

Hey folks!
Last year I put together a group of folks from the Battleborn community to do a Gamejam and I’m looking at doing another one at some point in the near future (probably some time after the Global Gamejam depending on everyone’s schedule).

A mini game jam run through Discord made up of folks who met via Battleborn.

We are currently looking for more folks who might be interested in gaining some experience working as part of a small team building a game over 72 hours. In particular, we want to get someone in to do the role of producer who will handle communications between the different teams, have final say on all decisions and be the central person handling the documentation. We found that making someone the producer on top of their other work put a lot of pressure on them, so this time around we wanted to separate it out into its own role.

You don’t need to know how to write code or do art, but you will want to have good people skills and be organized, but if you have never done anything like this before, that is fine too! The goal of running this gamejam is giving folks the opportunity to get a taste of what it is like to make games in a safe environment and hopefully among friends!

If you want to be involved, feel free to reach out! This includes if you have other skills you’d like work on as part of the gamejam (ie art, coding, learning to use unity, etc).

Nemo for director of Battle Poly-Faceted-Geometric-Solids!

Taking place after his family was converted to 2-dimensional non-solids, a young cube enlists to to the military. Little does he know that his hardships have only just begun.

BPFGS is the latest evolution of the geometry warfare series, returning to its roots to bring a realistic yet compelling story of a geometric soldier during the circle wars.

I might be interested. Very much so. To direct that is because I have little to no skill in anything else for game development. However I do a lot of school right now. Maybe i see how time happens

This weekend, some folks from the Battleborn community are getting together to do our second annual gamejam! You can follow our progress on Twitter via #DiscordJam or the hub page on my website. Some of us are looking to stream as well, so keep and eye out for that! 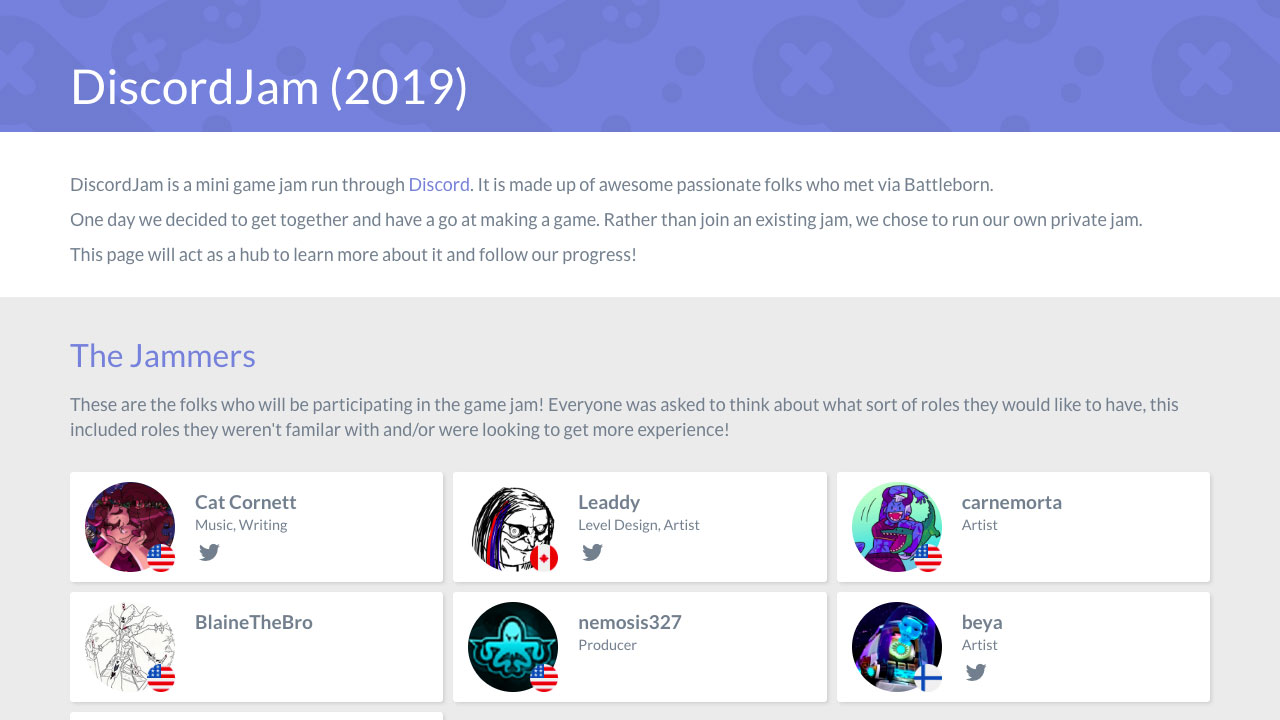 A mini game jam run through Discord made up of folks who met via Battleborn.