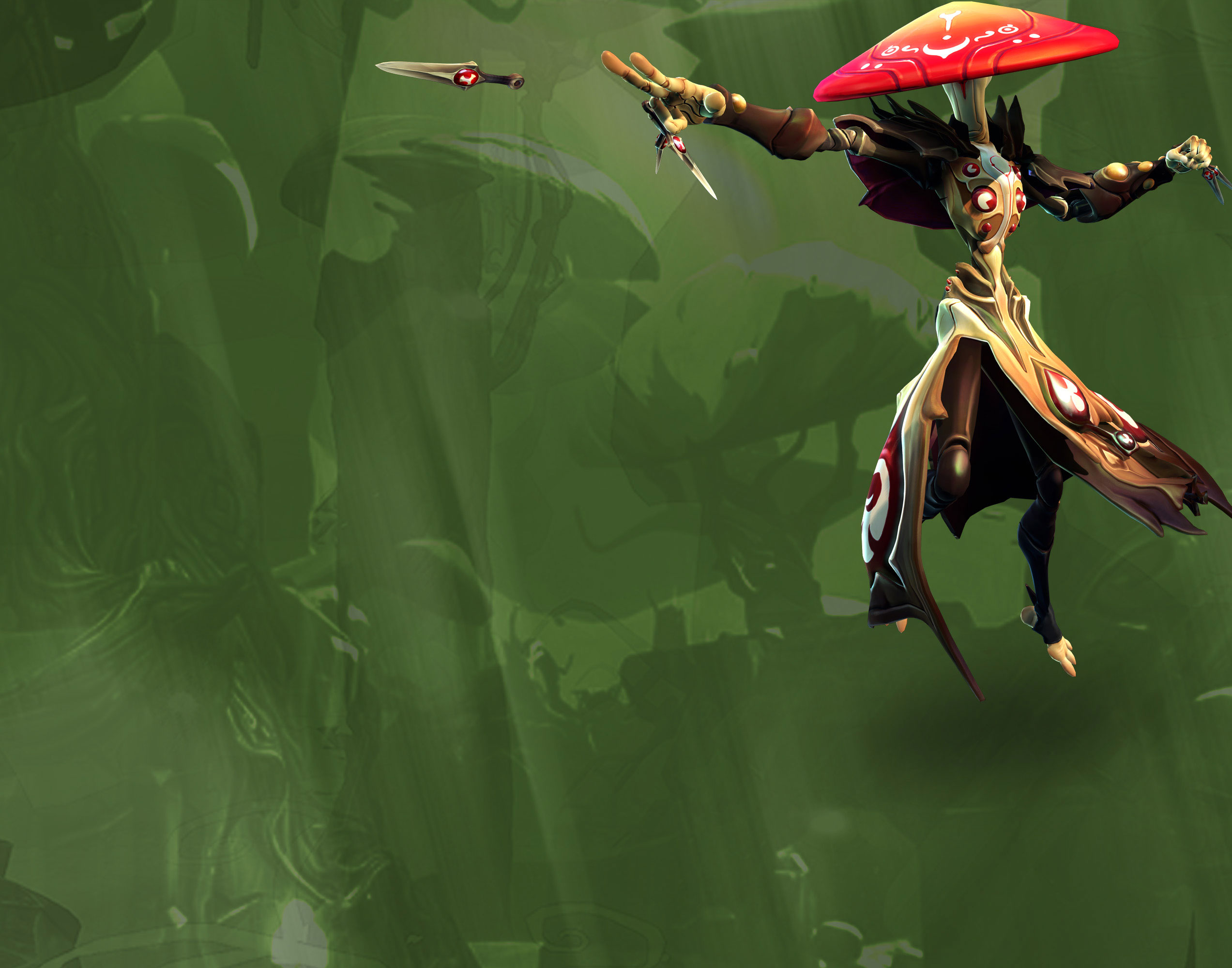 The last surviving bud of a planet-spanning fungal colony, the otherworldly Miko is regarded as a capable “combat botanist,” healing and protecting its allies while hurling poison-tipped kunai at pretty much everything else.

A naturalistic order of observers and scientists, charged with the stewardship of the natural order of the cosmos. Long ago, the reach of the legendary Eldrid spanned entire galaxies – but as the stars themselves have faded into darkness, so too has the might of this ancient faction. As all eyes turn to Solus, what remains of the Eldrid are grappling with their place in a darkening universe as they rally in defense of the Last Star.

hurls a barrage of poison-tipped Kunai

This is most likely low damage high fire rate and a quick reload speed. Combined with the DOT from Molecular Mycology it should be plenty to take down enemies that are weakened or slow but you will not be a front line attacker with Miko from what I have seen.

activates a Healing Beam that restores health to target allies

Miko has evolved to adapt and survive through natural toughness, rapid health regeneration and the ability to cover ground quickly.

Like all Eldrid Miko does not have a shield, but you can get over shielded or pick them up for more help. The health regen hopefully is strong enough.

If this stacks then the offensive output should be stong, the helix can both increase your fire rate and reload speed of your Kunai as well making DOTs all over the place.

Throw a spore sack that explodes on contact, dealing 139-187 damage and leaving behind a cloud of spores that slows all enemies that enter it for the next 4 seconds.

The damage here seems secondary to the slowing effect, prevents enemies from getting to you as well as makes them easy to pick off. The Helix has many ways of improving this from, size, duration, damage, debuff, cooldown, and adding DOT’s to it. Making it a very powerful looking skill.

A skill to heal yourself is welcome on a nurse IMO, you can’t nurse if you are not alive. The fact it also increases the way you heal is even better. The Helix tree lets you use this to heal more, heal yourself more as well.

Hurl a mushroom to create an area of effect lasting 45 seconds. Allies gain 83-150 health per second while in range. Can be destroyed by enemies.

The fact that this last 45 seconds will make it a huge priority for your enemies to take it out, but if they are attacking this they are also not attacking you or your teammates. With the Helix tree either adding health to this or DOT to it can both work out great. I really love this for an ultimate ability.

Intensifies the slowing effect of Cloud of Spores. +100% Slower

While both of these look good, slowing enemies 100% seems stronger than moving faster. Miko is support and while numbers are subject to change that much movement speed reduction sounds like it will make enemies easy picking and give you great control of the field.

Biosynthesis’ healing-over-time effects are extended to nearby allies.

I like Heal Thyself better, in TPS athena had the nearby healing skills but your teammates were usually moving to much to keep them in the bubble. From what I have seen the speed of this game will make it hard as well. So Heal Thyself seems like it will be able to keep you closer to the front lines and heal effectively while staying alive.

This one is a toss up to me right now, both seem great. From the videos I have seen the reload seems short already so I might edge towards cooldown, but Miko has little for DPS increases so its hard to pass them up.

Cloud of Spores drops spores along the way to a target, covering a larger area.

If Cloud of Spores hits an enemy directly, that enemy is stunned rather than slowing all enemies in the blast radius.

I like the Trail more, make it very hard for enemies to get to you and easy to pick off, but if a map has more of a threat with BA enemies than a lot of trash mobs I can see shock being much more useful. This goes with what the Devs have been saying, one skill might be better in one map than another. This seems like the case here.

A portion of damage dealt to enemy health by Molecular Mycology is returned to Miko as health. +20% Life Steal

All of us Borderlands players know the value of life steal, but if Miko has enough survival the dot spreading will be more valuable, like @spunky117’s nurse not needing lifetap and he is right with that. This might also be trash mob, vs BA enemies once again. So it could vary map to map or even PVP vs PVE.

Increases all self healing effects of Biosynthesis. +15% Healing

This is another DPS vs Tank and really will depend on playstyle, your other skills, and other factors we will have to wait to play to see.

I like slinger more here, again limited DPS on a healing class makes it important, the word BRIEF worries me meaning it might not be enough. 20% attack speed on the other hand sounds useful always.

Both of these sound really strong, healing reducing your cooldown to self heal and heal better is amazing on a nurse class, but also increasing the duration. I have no clue which one of these will work better but Im predicting right now people will not agree about these two and fight until the last star burns out.

This is another toss up, area vs duration. Time will tell but im guessing maps will be the factor here.

Fungus Among Us can withstand much more damage before being destroyed. +214 Max Mushroom Health

Fungus Among Us deals damage over time to enemies in range. +78 Damage Per Second

I like Vicious, 45 seconds of a decent DOT seems really scary to your enemies making them to be forced to take out the Fungus, a well placed one seems like it could cause major issues for them and also once again if they are attacking the fungus they are easy prey for you and your very healthy team. Barkskin sounds good as well, but that DOT has me more excited right now.

All areas in “quote” are from https://battleborn.com and all numbers are subject to change

i gotta say, miko looks pretty darn cool. i can’t wait to play as her, which is weird because i’m not the healer/support type

I read somewhere that Miko’s ultimate ability doesn’t only heal allies in it aoe, it also damages enemies. Can anyone confirm this?

I’ve heard Mikos ultimate not only heals allies but also damages enemies. Is this true?

Yeah, at least according to information we got a while ago. Stuff changes a lot, but I’m fairly certain that’s how it works.

GBX said they were careful to make sure all characters are passable in combat, so no one is forced into a support role as well as allowing solo/any mixing possible able to play the game.

Miko is a girls name… but i guess considering the fact that Miko the character is genderless… i see your point.

In the helix tree it can be updated to have a DOT.

Also I updated the OP, let me know what you all think and if its good I’ll start with the others.

This is Amazing! Really detailed!
Good Job!
Can you do Phoebe next?