You are producing some really nice turrets. Might I commission you to make a concept for an EMP turret to be mounted a taiidan republic corvette? I am struggling to come up with ideas that look authentic and sufficiently different to existing turrets.

I can do something at weekend.

If you have any idea how it should look (images/references) send pm to me and i try to come up with something.

Great! It should be a similar scale to other corvette turrets, but as for design I don’t really have any hard preferences. I think we’d like it to be single-barrelled, and I quite like the assymmetry of the pulsar corvette. The main thing is it needs to be unique (it is a unique weapon) but consistent with hw2 design philosophies. Perhaps you could take some visual cues from the scout, the only stock unit that has an EMP turret.

My idea for the “story” is that the hiigarans developed the technology and shared it with their allies the republic, which is why I thought of you and your excellent hiigaran turret styles 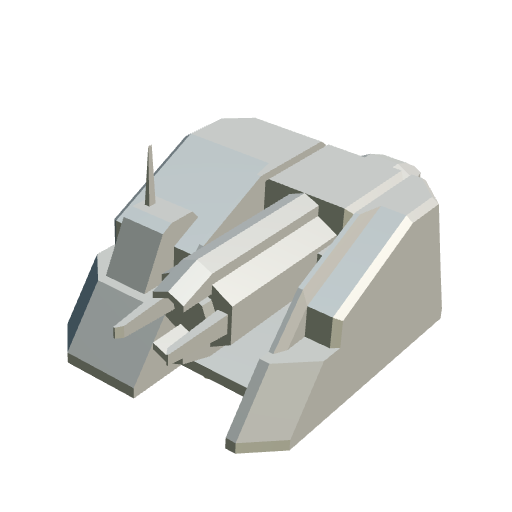 EMP turret by unifin, intended for use on the Taiidan Republic EMP Corvette.

Thanks @unifin! I think it looks great, I will try to get it in game soon so you can see it in action.

I been testing highpoly normal baking.

This model was made originally for complex mod. But as it was simple cool model i wanted to try new things with it.

So i wanted to try normal map baking.

With this simple model it took 3 times to get normals maps right without errors and stuff.
Meaning, i actually made normal map 3 times because my uv’s were not arranged like they should be.
There was also some fun little things like smoothing and curvature map not baking correctly.

There are some errors still but biggest ones are gone.

I dont know if you can notice smooth corners and stuff. But that is basically caused by normal map baking.

Thats all for now. Gonna post pictures from ingame later.

Gearbox didn’t bake them. They used Ndo an Xnormal.

@pouk They may have used both. Some of the ships have details on them that are only explicable with bakes. The Kushan corvettes in particular.

@unifin That ship is goddamn sexy. Though are those aliasing artifacts on some of the diagonal lines? Also, IIRC some artists do exaggerate the beveled/chamfered corners for bake purposes so that they read better.

I didn’t look at the HW1 normal maps yet.

Very nice… That turret in post 322 would almost make for a fine ship by itself… Or some sort of automated seeker/guardian drone.

I have remastered 2 of my old models. Basically did new uv maps for normal bake and also updated models a bit. Then bringed em to painter where i did all detailing.

And here are the results.
Hiigaran Torpedo Bomber

And torpedo for it.

All things and scaling.

Everything is rendered in Blender 3D

I have not put these into game yet. But it should not be big problem anyways.

I am pretty busy in RL atm. Got many things to do. Like moving to another city which is 600km away from where i am now. And i only have couple weeks left before new job starts.

Thats mostly all for now.

Model quality is simply stellar, as always. And I have problems with the design, as always (-these double ‘massive’ turrets are cartoonishly big).

Tell us more about the Substance Designer, because you’re literally the best texturer in the Homeworld modding scene by a long mile, so we all want to know your secrets.

I am having same thoughts about those turrets, but then again pulsar corvette turret is also pretty big compared to it’s chassic. I might make them smaller.

Strange because i think you are best especially when it comes to little details. I just try to make my things fast. So i ca move to other things. Which is good and bad. It usually means i am going to come back to my model to fix something.

I have only done one texture in substance designer related to homeworld texturing so far. Rest are my old base textures made in photoshop. Then there are those textures which came with substance painter/designer and they are pretty good.

Substance source textures are good for making base textures for example.

Specific detail styles can be done in designer. And it is not even hard. I think hardest thing with painter is making smartmaterial which haves everything in it, with right blending modes and values so it looks good on everything.

I am going to upload little timelapse video of me doing some texturing in painter.

Love the design, but I have to agree. I know it’s your design and vision, but what would the turrets look like scaled down to, say 90%?

Thats mostly all for now.

Are you planning on redoing other ships you’ve done, or were you mostly just experimenting with your new program?

Like moving to another city which is 600km away

And i only have couple weeks left before new job starts.

What line of work is you new job in? And again, good luck!

Two things: You still have it about 10% - 15% more massive in comparison with this particular example.
And there’s only one of them. If you look at the double turrets, the assault gunship, the turrets are half the size. So what you have here is like 220% more mass compared to either of the Corvettes.

Strange because i think you are best especially when it comes to little details. I just try to make my things fast. So i ca move to other things. Which is good and bad. It usually means i am going to come back to my model to fix something.

I might spend a month on a ship, but you’re lightning fast and produce better results overall. Here and there there are details of your ships I don’t agree with, but at the end of the day you’ll finish your mod with super quality models when I’ll be barely a third way in.
That’s definitely what counts.

Hmm yeah i guess you are right about turrets. Gonna do some resizing to em.
This has happened before and it will happen again. Being blinded by my confidence.

Logo is pretty much wip. And i do agree that it looks like tattoo more than logo of a race.

Are you planning on redoing other ships you’ve done, or were you mostly just experimenting with your new program?

What line of work is you new job in? And again, good luck!

Thanks. And it is game industry related.

And it is game industry related.

Damn, I can’t find myself a game anything job in here.