Is this a common glitch or was it just me and my early Knox ventures in both playthroughs?

Just to clarify, I got 2 sdu’s as the reward in both playthroughs but they never showed up in my backpack. But I didn’t save after I turned in the pt1 mission since I got burned once in pt2 so I’m gonna wait for a patch to maybe fix it.

I don’t think you get a SDU from the Underdome, just the extra skill point. 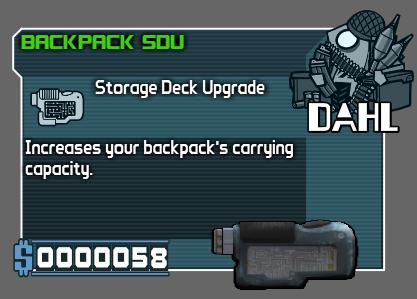 A Storage Deck Upgrade (or SDU) is an upgrade item that can be applied to a character's inventory to increase that character's storage capacity. The different types of SDU that players will interact with include a'Backpack SDU' and a number of...

You do. It shows as a quest reward and you get to see the sdu being rewarded but they never appear in your backpack like the other sdu’s.

Which Knoxx missions give SDUs aside from the Lockdown Palace Claptrap rescue?

The link that @VaultHunter101 put is correct it mentions you get a skill point sdu in the article .Edit: Ok sounds good man you can archive it if you want to basically it removes and blocks people from posting .

I did the same mistake the first time. Didn’t read and assumed it was a backpack upgrade. Only noticed it after reading about the bonus skill point!
My old friend who played Borderlands before the 2 was release assumed the same thing too!

I had to tell him where that extra skill point came from!!!
… We’re not alone.

There’s a backpack Claptrap in DLCs 1, 3, and 4. If you want to get these in PT2, you have to get these guys before you enter the vault in PT2, otherwise the reward will always be a grenade mod.
Good luck farming the Knoxx one, that farm is horrendous.

Technically there should be 72 item slots but the game doesn’t guarantee them in pt2. Maybe the devs can patch a second merchant claptrap into the game at Moxxies that sells them?

If you want to get these in PT2, you have to get these guys before you enter the vault in PT2, otherwise the reward will always be a grenade mod.

We need to stop repeating this as gospel - I recently got the one in DLC4 in PT2.5…absolutely certain of it. It begs the question of whether the others are possible too! Unfortunately they are a both a long way from fast travel!

Tell ya what, in my current one-life playthrough I’ll leave them out and try to get them all in 2.5 if I make it that far.

Well, I suppose the easiest to test this one would be the Claptrap one.
If it’s proven false, wonderful!

I just recently finished the main story and unlocked PT 2.5, prior to this I didn’t run any DLC’s. First one I completed was the Claptrap DLC and on my 1st Claptrap Rescue mission I received an SDU. So it is possible.